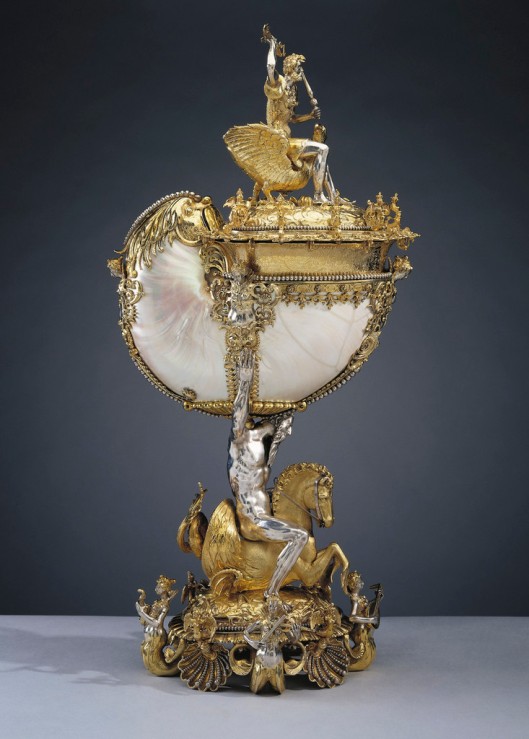 LONDON – Art Antiques London Announces 6th Annual Edition in Kensington Gardens, London,  12-18 June 2015  —  Face to Face: Dame Rosalind Savill in Conversation with The Duke of Wellington on the Bicentenary of the Battle of Waterloo Will Highlight Lecture Programme.

Anna and Brian Haughton, the London-based international art and antiques Fair organizers have announced plans for Art Antiques London, which will run from 12th-18th June 2015 in Kensington Gardens, London. It will be the 6th edition of this acclaimed Fair which takes place in a purpose-built pavilion in Kensington Gardens. Set in the beautiful parkland of Kensington Gardens, the Fair’s Pavilion is positioned next to the Albert Memorial and opposite the Royal College of Art and The Royal Albert Hall. Art Antiques London is the first fair to take place on the historic site of the Great Exhibition of 1851. Art Antiques London brings together more than 60 exciting international art and antiques dealers offering exceptional works of art, among them many of museum quality. Furniture, paintings, drawings, sculpture, textiles, ceramics, glass, clocks, watches, jewellery, objets de vertu, silver, antiquities and Asian art are among the many different categories included and for sale.

The superb lecture programme is a particular feature of the Fair, underpinning its academic credentials and always receives acclaim from collectors and museum curators. The Fair has been most successful in furthering the tradition of collecting, connoisseurship and academia, setting the fair apart from other events in the Capital. The Fair presents a serious platform, that, according to Anna Somers Cocks in The Art Newspaper (20 June 2013) “like the Old Master drawings fair in Paris, but unlike most other fairs today,… is an encounter between people who really want to talk art and handle objects knowledgeably.”

Among the highlights of the Lecture Programme:

The great treasuries of Henry VIII and Elizabeth I list curiosities from around the world – unicorn horns, works of amber, pelican bones and wrought pieces of silver and gold. This tradition of collecting was widespread in the courts of Europe but less well known in England and does not appear to have been widely pursued by later monarchs. Yet historic inventories and other archival documents do offer occasional glimpses of an English Wunderkammer containing humming birds, whale’s ribs and bezoar stones, as well as exquisitely carved Roman gemstones and works of art by Holbein. It was the greatest royal collector, however, who revived the tradition of his forebears in his collections of the early nineteenth century. George IV’s great collection included items of silver gilt, ivory, amber, mother of pearl, jewelled cups and nautilus shells. Kathryn Jones will look at the history of these royal cabinets of curiosities and some of the surviving wonders in the Royal Collection. 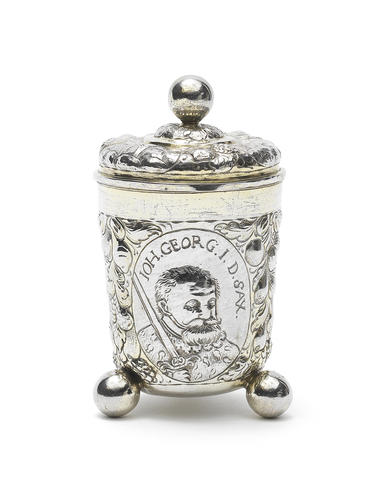 he sides embossed with three oval panels each depicting a profile of a monarch in profile and engraved « IOH GEORG 1 – 111 D. SAX », with pendant fruit between, the separate pull-off cover embossed and chased with elongated oval panels of rural scenes and fruit, applied with a ball finial, height 15cm, weight 6.5oz. 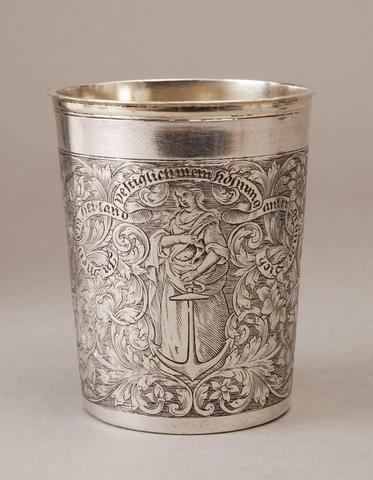 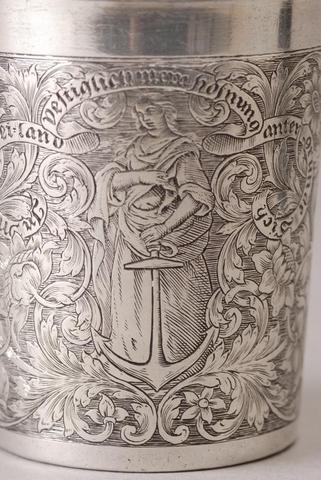 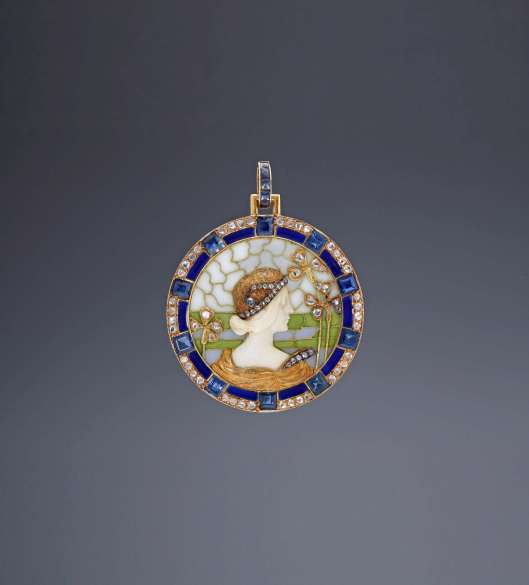 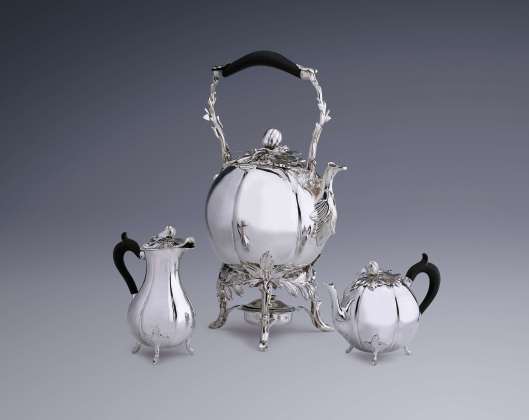 A. Aardewerk Antiquair.Juwelier is a family-owned company specialising in superb quality antique Dutch silver dating from the 16th century onwards, as well as in antique and period jewellery.

With its traditions firmly rooted in the city of The Hague, the company’s history goes back to the turn of the 20th century. In November 1970 Abraham and his wife Magdie opened the current showrooms in Jan van Nassaustraat in The Hague. Emiel and Esther, who were raised with antiques, joined their father in the business in 1995. They are the fourth generation of antique experts in the family and the directors of the company. 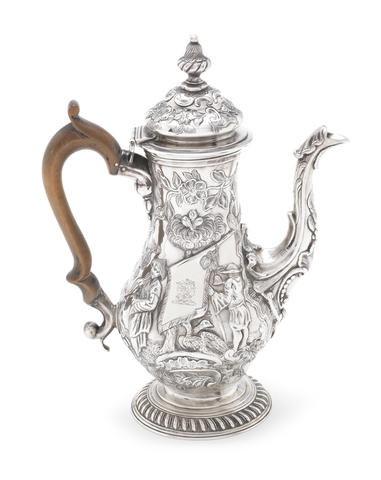 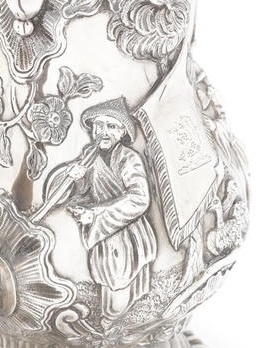 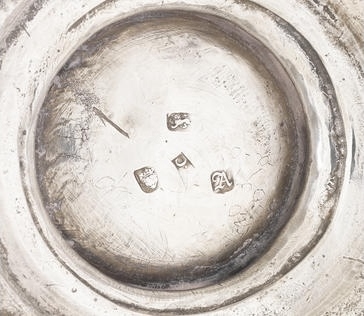 Slender baluster form, the raised domed hinged cover embossed and chased with flower heads, foliage and ‘C’ scrolls, crowned with a swirling and lobed baluster knop finial, with a wooden double-scrolled handle, the scrolled spout embellished with foliate scrolls and scallop-shells, the junction encircled by spume, the body chased with rococo ‘chinoiserie’ scenes, one of a man dressed in stylised Oriental costume and turban fishing observed a young lady with a high hair knop sitting in a tea house under a palm tree, in the background a man in a coolie hat crosses over an arched bridge, the reverse with another elaborately chased scene of a man carrying the pole hung with tassels and a banner engraved with a crest attended by another man, all under a palm tree with two peacocks, raised on a stemmed circular base with gadrooned rim, height 28cm,weight total 33oz.

Notes: Engraved with a crest probably for ARMYTAGE, originally of Kirklees, Yorkshire.

The maker’s mark shows only a pellet and C; the two most likely candidates are William Cripps or Francis Crump. The positioning of the pellet and shape of the ‘C’ point to Crump. A similarly decorated pot by Crump is held at the Leeds Museum & Galleries (Temple Newsam) 1991.0008.

The scenes are inspired by the designs of Jean Pillement (1728-1808), published by Robert Sayer, The Ladies Amusement: The Whole Art of Japanning, Made Easy (London 1762). The chaser has, clearly, taken inspiration from a single page from the book for this pot, adapting the vignettes to fit around the body of the pot.

James Lomax suggests that a single chaser specialising in Chinoiserie coffee pots was working for a group of silversmiths that included Charles Wright, Whipham and Wright, William Cripps and Francis Crump, British Silver at Temple Newsam and Lotherton Hall (Leeds 1992), p.133. However, The present lot was created a decade before the Temple Newsam example (1769), the following lot (London 1765) and an example by Whipham and Wright (London 1767) sold at Sotheby’s 23 May 1991, ex-lot 280. In comparison, the pot is smaller making the decoration more intense. 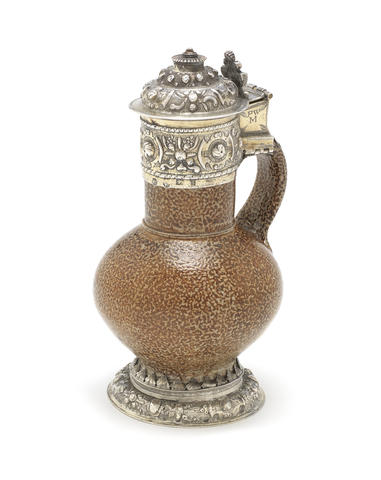 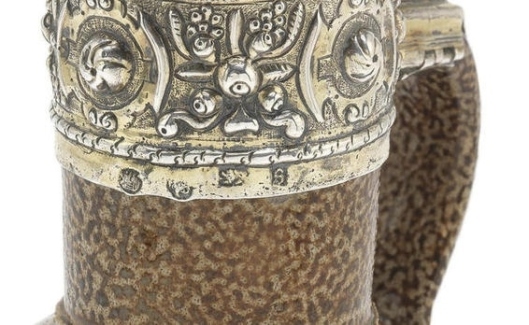 Globular with cylindrical neck, loop handle and mottled brown glaze, the spreading foot embossed with alternate panels of flowers and lobes, collar and hinged cover chased with similar decoration, and the cover also applied with a fluted disc and ornate thumb-piece, prick-dot engraved on side handle junction « PW » over « M », height 24cm. 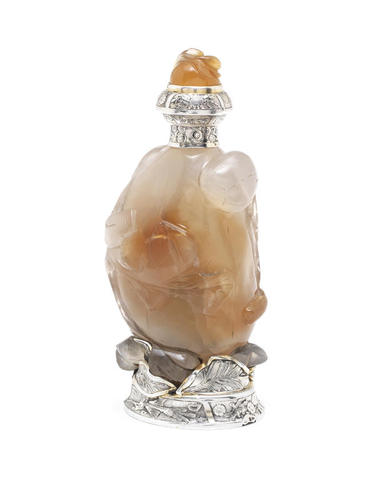 The pull-off mounted cover carved with foliate branch, the silver mount chased with alternating panels depicting flowerheads, birds and insects, the agate body carved with foliage, fitted into an oval base with leaves, embellished border below with foliage and similarly decorated panels to the cover, with exotic birds, fish and insects, underside centred with a metal vesta striker, flanked with engraved decoration, height 10cm. 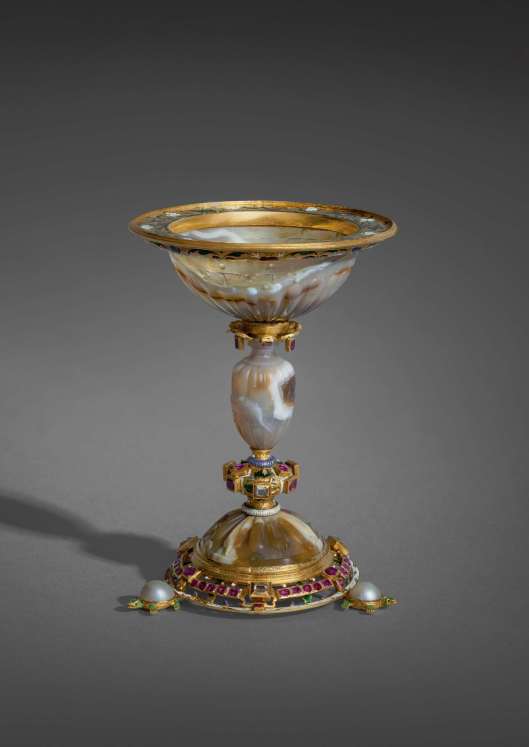 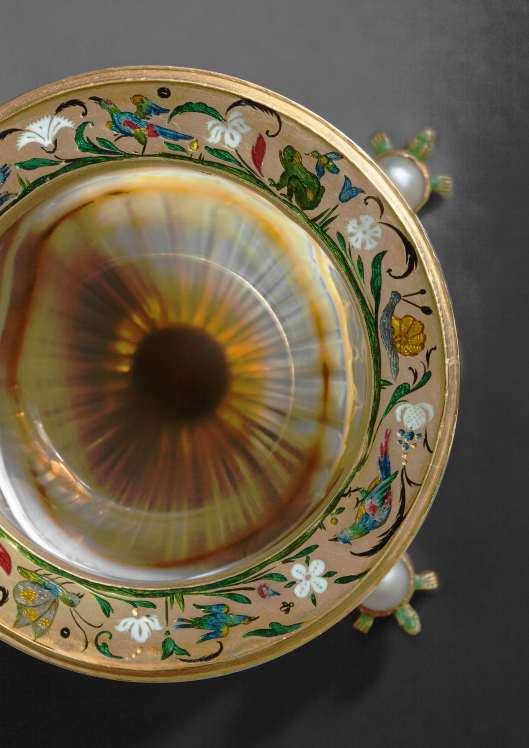 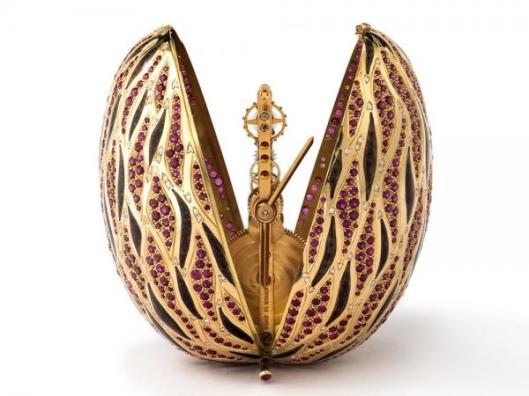 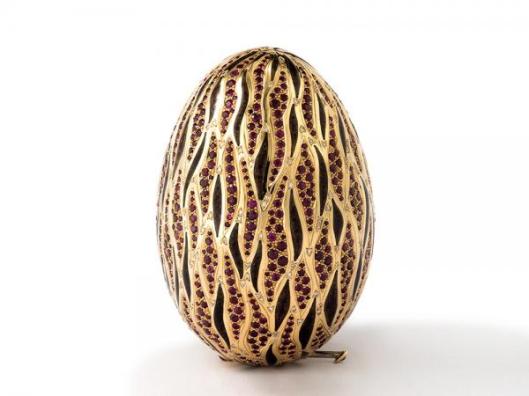 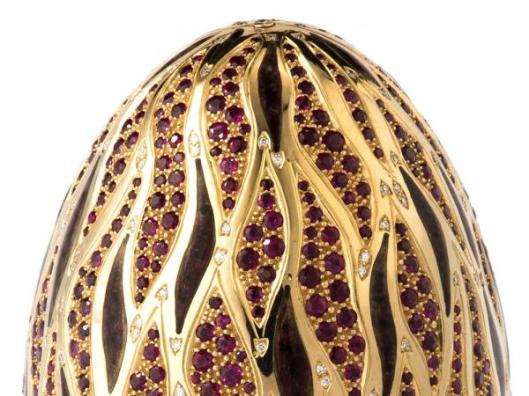 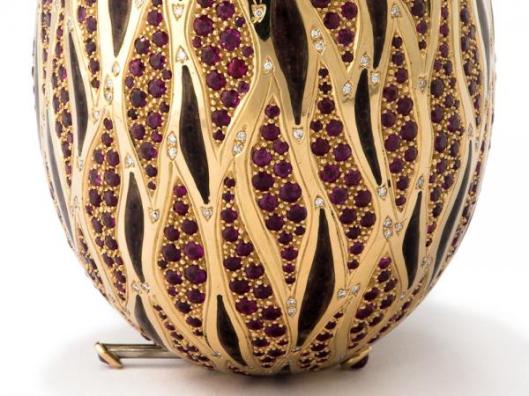 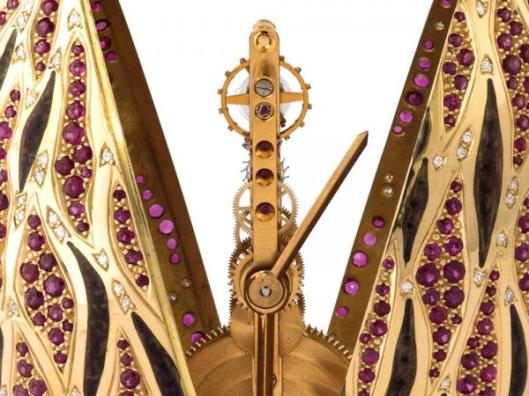 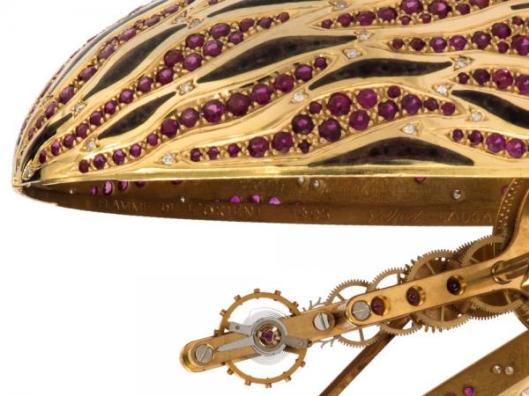 The objet de vertu is in excellent condition with minimal traces of use. No guarantee on time keeping accuracy and durance.
The height is 12 cm.
The overall weight is 365 grams. 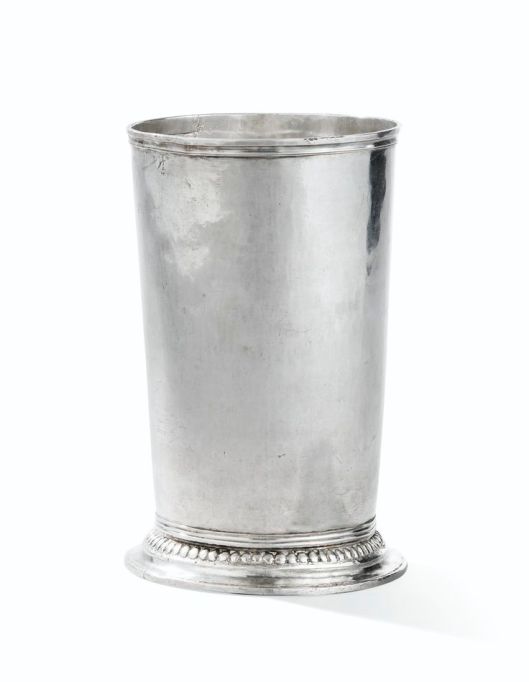