LONDON.- A series of paintings by one of Japan’s most celebrated artists, finely carved ivories, delicate porcelain and precisely crafted metalworks are just some of the items to go under the hammer in the November 6th Fine Japanese Art sale at Bonhams New Bond Street salerooms.

A highlight of the sale is a remarkable silver articulated carp by Takase Torakichi, known as Kozan (1869-1934), estimated at £60,000-80,000. Realistically rendered, the fins, mouth, eyes and tail are intricately detailed and constructed from smoothly moving parts.

After a period apprenticed to a leading master based in Kyoto, in 1893 Kozan opened his own business selling metalwork both domestically and abroad, soon becoming famous for his articulated models of sea life and insects. In 1910, the artist was singled out for high honour when the Crown Prince (later the Taisho Emperor) purchased several of Kozan’s astonishingly realistic insects during a visit to Kyoto. 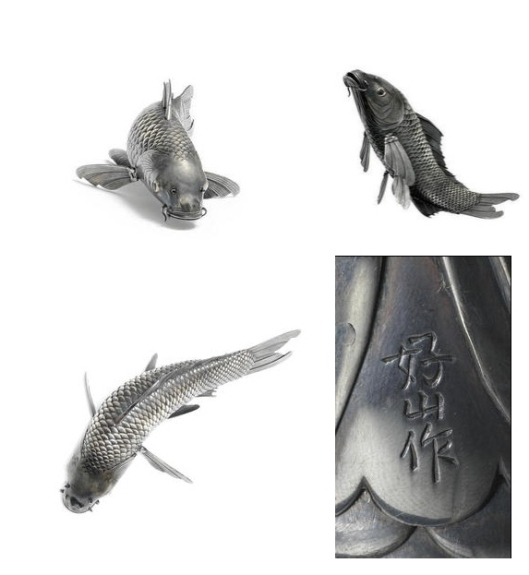 Realistically rendered, the fins, mouth, eyes and tail intricately detailed and constructed of smoothly moving parts, signed on the underside with chiselled signature Kozan saku; with tomobako titled Hakuri with seal, the inside of the lid signed Kozan with seal Kozan and tomogire (original silk wrapper) stamped with seal Kozan. 29cm (11 3/8in) long. (3)

Notes: Born in Kanazawa the eldest son of Takase Kanatake, Kozan started working in the export department of Ikeda Seisuke’s ceramics export company in Kobe, in 1883 and transferred in 1887 to the metalworking division of the factory’s Kyoto branch, where he learned metalworking techniques from Tomiki Isuke. In 1893, he became independent and started a business selling metalwork both domestically and abroad, soon becoming famous for his articulated studies of sea life and insects. In 1910, the artist was honoured when the Crown Prince (later the Taisho Emperor) purchased several of his astonishingly realistic articulated insects during a visit to Kyoto.

A rare and complete set of Takase Kozan’s silver articulated insects was sold in these rooms, 7 November 2013, lot 512

An additional item by Kozan, an intricately detailed iron okimono (decorative object) of an insect on a bamboo leaf, is also in this sale, with an estimate of £5,000-8,000. 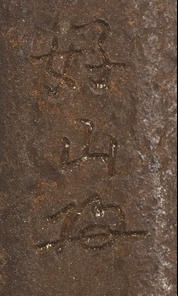 Modelled in the form of a branch of bamboo with three leaves, the largest of which is applied with a silver suzumushi (bell cricket) crawling towards the nectar, the other two leaves shown in differing stages of decay, signed beneath one leaf Kozan with kao; with wood storage box.28.5cm (11¼in) long. (2).

Another feature of the sale is a collection of paintings by the renowned painter and lacquerer Shibata Zeshin (1807–1891), an artist not only famous in his own country but also admired by Western collectors for over a century. Before becoming Japan’s most prominent master of the art of lacquer, he was at first better known as a painter.

The great majority of Zeshin’s surviving works date from the last three decades of his life. During those years Zeshin produced a succession of masterpieces—in lacquered wood, lacquer painting, and painting in ink and colours—that attracted scores of prominent clients, earned him official honours, and made him one of the first living Japanese artists to achieve name recognition in Europe and the United States.

Bonhams will sell other masterworks by Zeshin in the Misumi Collection of Important Works of Lacquer Art and Paintings sale, on the 5th of November. Nine of these works were included in a comprehensive Zeshin exhibition held in 2012 at Tokyo’s acclaimed new Nezu Museum. In addition, an inro (medicine container) by the artist is included in the sale of the Edward Wrangham Collection: Part V, to be held on the same day.

A set of tanzaku (poem-cards) with designs for the twelve months, painted in ink, colours and gold on silk mounted on thin card, with a gold-painted border, interleaved with twelve gold-decorated cards, each with signature Zeshin and sealReisai, identified on the reverse with the name of the month in English:

Notes: For another example of a set of Zeshin tanzaku, please refer to our catalogue of the Misumi Collection: Important Works of Lacquer Art and Paintings: Part I (5 November 2014), lot 8. 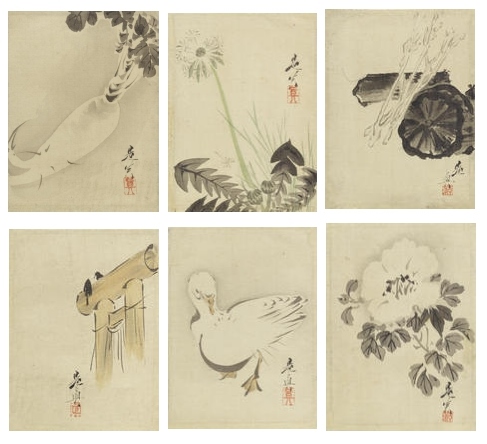 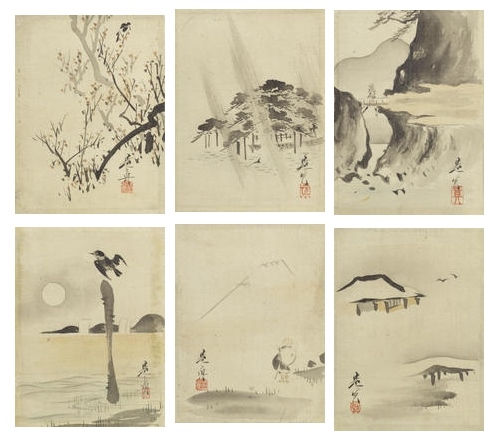 Also of interest in the Fine Japanese Art sale is a rare Imari blue-and-white porcelain spirit keg from the early 18th century, expected to achieve £50,000-60,000. It is modelled in the form of a cheerful drunken Dutchman, smiling as he sits astride a barrel, holding aloft a small bottle in one hand and a stemmed wine glass in the other. 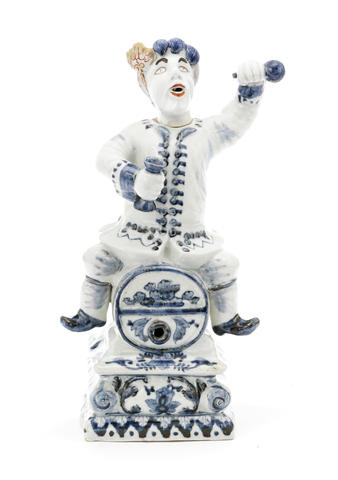 In the form of a cheerful drunken Dutchman smiling as he sits astride a barrel, holding aloft a small bottle with one hand and a stemmed wine glass with the other, the barrel resting on a rectangular base moulded with scrolls and painted in underglaze blue with simplified flowers and foliage, the man’s buttoned coat spreading out over his splayed legs and his detachable head topped by a loose cap adorned with pom-poms and a gilt and red enamelled plume.35cm (13¾in) high. (2).

For variations on the theme decorated in cobalt blue and in coloured enamels, see Kyushu Ceramic Museum, The Voyage of Old-Imari Porcelains, Arita, 2000, pp.64-65.

Ceramic models of figures on barrels were produced during the 18th century as ‘follies’ in the Netherlands and other European countries. Some variations were produced in Delft factories, decorated in polychrome enamels as well as in underglaze blue, the latter being somewhat rarer, and they would have been originally fitted with a metal tap at one of the barrel.

Other important items include a fine stained okimono ivory group of fruit by Ando Rokuzan (1885-1955). Naturalistically carved and coloured, it is estimated at £30,000-40,000. Rokuzan is known for his lifelike ivory carvings of fruits and vegetables, and works by him are preserved in the Imperial Collections. 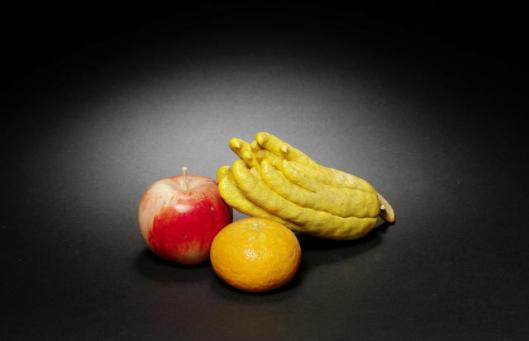 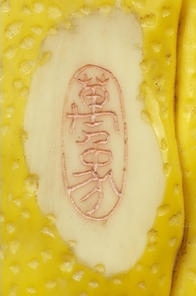 Comprising a naturalistically carved and coloured group of fruit clustered together, consisting of an apple, a tangerine and a Buddha’s-hand citron, signed Manzo; with wood tomobako, the inside of the lid with an inscription Zoge-sei mikan bukan ringo, hitokumi, Sakurai Sosai saku (An ivory group of a tangerine orange, a Buddhist hand citron and an apple, ‘made by’ Sakurai Sosai) with two seals Sakurai and So. 8cm x 19.5cm (3 1/8in x 7 5/8in). (2).

Notes: Ando Rokuzan, who used the go (art name) Manzo, is known for his lifelike ivory carvings of fruits and vegetables. He studied with Otani Mitsutoshi, a pupil of Hisamatsu Harutoshi. His works are preserved in the Sannomaru Shozakan Museum of the Imperial Collections.

Sakurai Sosai, a commissioner of fine ivory carvings in Tokyo during the Meiji and Taisho eras, represented a number of leading artists including Ando Rokuzan and Yamazaki Nankai

Comprising: a tea pot and cover of ovoid form, painted on one side with scenes of boys playing at battles during the Boys’ Festival and girls kneeling before a hinadan (display platform for dolls) during the Girls’ Festival, beneath an elaborate border of densely-clustered peonies and foliage in coloured enamels and gilding, 12.2cm x 16cm (4 13/16in x 6 5/16in); a sugar bowl and cover similarly painted with children playing before a shrine to Inari, the fox messenger of the rice god and boys beside a kadomatsu (pine display during the New Year) display, imitating samurai, 15.2cm (6in) wide; a milk jug painted with boys gathered around their companion drawing a landscape painting, and girls playing a game over a multi-coloured mat, 10.2cm (4in) wide; six matching cups decorated with children at various leisurely pursuits: