The slender vase is of elongated pear form with a slightly flaring mouth and is decorated in pale tones of cobalt blue with a continuous scene of the Eight Daoist Immortals and the Star God Shoulao above, between a chevron band at the rim and a band of blurred dots around the foot. 8 in. (20.3 cm.) high – Lot 3564 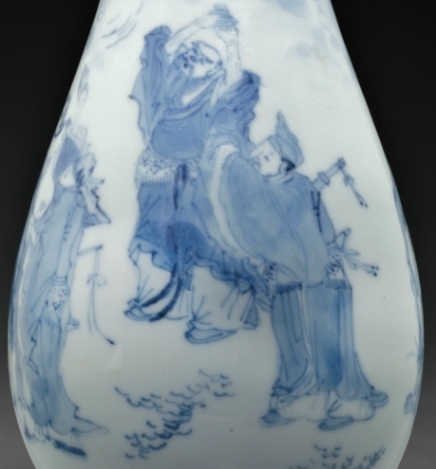 Notes: The Eight Daoist Immortals, Lu Dongbin, Han Xiangzi, Shang Guolao, Zhongli Qian, He Xiangu, Lan Caihe and Lie Tiegui, appear on this vase with Shoulao, the God of Longevity, who is accompanied by his deer. One of the three Star gods, Shoulao “appears to have emerged in his manifiestation as an old man with a huge, domed cranium in the late fourteenth or early fifteenth century. Such scenes are commonly encountered on Ming ceramics and other decorative arts form the Jiajing reign (1522-66) onward, and continued to enjoy great popularity during the Qing dynasty.” (Stephen Little with Shawn Eichman, Taoism and the Arts of China, Chicago, 2000, p. 321, where a description of each god and his/her attribute is included).

This theme appears on two other pieces from the Curtis Collection both dating to the Shunzhi period, a large bowl (lot 3559) and a large dish (lot 3560).