GRONINGEN.- The collections in Dresden form one of the best-kept secrets of European art. At the time, the art compilations amassed by Prince-Electors of Saxony in the eighteenth century belonged to the most beautiful and renowned collections in Europe. The Secret of Dresden – From Rembrandt to Canaletto displays a selection from the impressive collection of paintings that nowadays constitute the core of the Gemäldegalerie Alte Meister in Dresden. There are masterpieces such as the Rembrandt’s Abduction of Ganymede (1635), as well as works by painters who were once considered to be masters but have now been (almost) forgotten. Together they tell the story of the florescence of the court of Saxony in the eighteenth century.

Saxony was already one of the most prosperous German states when Prince-Elector August the Strong managed to acquire the kingship of Poland in 1697. He underlined his new status among the royal courts of Europe by starting up ambitious building projects and initiating an impressive art collection that could rival those of the major royal collections of that period. After his death, his collecting activities were continued by his son August III until deep into the eighteenth century. The cultural wealth of Dresden was so notable that the city was referred to as ‘Florence on the Elbe’. The general public was increasingly granted access to the collection of paintings, so that one of the first public museums in the world eventually arose. Goethe, who often visited the Gemäldegalerie, regarded it as a true sanctuary of art.

As a consequence of renovation, a part of the collection of the Gemäldegalerie Alte Meister has now become temporarily available for display elsewhere. In a number of thematic chapters, ‘The Secret of Dresden’ tells of the important role of art in eighteenth-century Saxony. On show are mythological paintings by Rembrandt and Canaletto, portraits by Titian and Velazquez, views of Venice by Canaletto, and landscapes by Philips Wouwerman and Claude Lorrain. 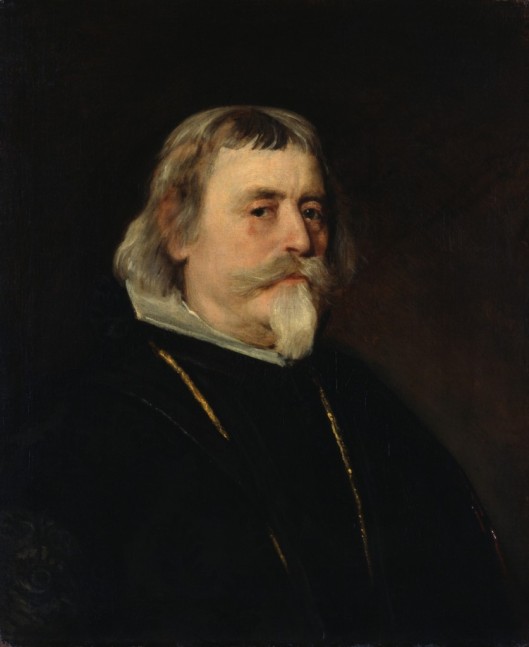 In addition to Groningen, this exhibition will also be on display in Munich and Vienna. An extensive German catalogue will accompany the exhibition, supplemented by a more concise Dutch-language version.

An exhibition organized by the Staatliche Kunstsammlungen Dresden in conjunction with the Groninger Museum. 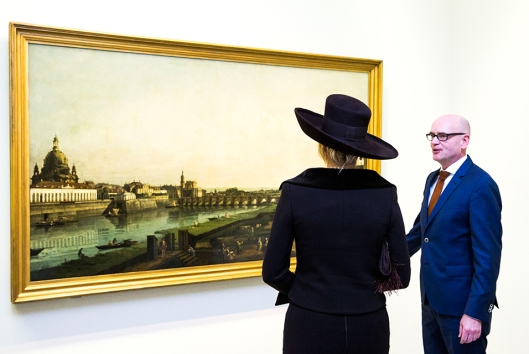 Dutch Queen Maxima and Groninger Museum director Andreas Bluhm look at the painting « Dresden from the right bank of the Elde » by painter Bernardo Bellotto during the official opening of the exhibition ‘The secret of Dresden’ in Groningen, on December 12, 2014. AFP PHOTO / ANP / VINCENT JANNINK.

Dutch Queen Maxima looks at ta painting during the official opening of the exhibition ‘The secret of Dresden’ at the Groninger Museum in Groningen, on December 12, 2014. AFP PHOTO / ANP / VINCENT JANNINK

August 27, 1576. Tiziano Vecelli or Tiziano Vecellio (c. 1488/1490 – 27 August 1576) known in English as Titian was an Italian painter, the most important member of the 16th-century Venetian school. He was born in Pieve di Cadore, near Belluno (in Veneto), in the Republic of Venice. During his lifetime he was often called da Cadore, taken from the place of his birth.

A woman looks at Titian’s painting « Mary Magdalene in Penitence » during a press preview of an exhibition of 16th and 17th century Italian painting at the Museum of Cycladic Art in Athens, Greece, on Monday Sept. 22, 2008. The exhibition « From Titian to Pietro da Cortona: Myth Poetry and the Sacred, » ran until Dec. 20. On display were 24 works by Titian and other Italian masters, on loan from a score of Italian galleries and collections.