LONDON.- Dominique Lévy Gallery presents Sotto Voce, the second show at its new London space. This exhibition connects artists from around the world, united by a common medium: the abstract white relief. From the earliest unfoldings of ﬁguration by Henri Laurens produced in Paris to the harmonious constructions of the Brazilian Sergio Camargo, Sotto Voce maps the progression of the abstract white relief geographically and through time, with a focus on the 1930s to 1970s. 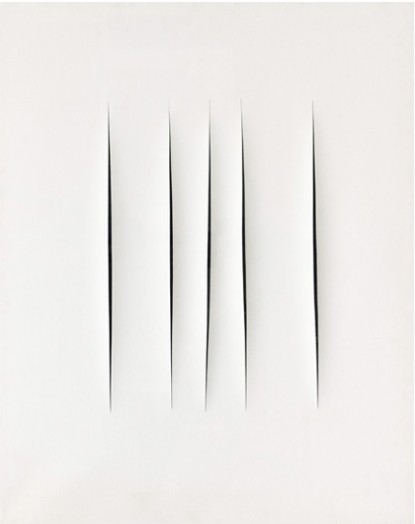 Alongside Laurens and Camargo, the exhibition will feature works by Jean Arp, Ben Nicholson, Lucio Fontana, Piero Manzoni, Enrico Castellani, Fausto Melotti, Günther Uecker, Luis Tomasello, and Mira Schendel, amongst others. While the white palette may give the works a soft voice, their messages are loud and clear, whether they may be a cry of hope, an attempt at nothingness, an expression of aesthetic idealism, or a surge towards transcendence. Sotto Voce will demonstrate how this subtle yet forceful dialogue was carried out internationally through the language of the white relief by artists at the forefront of their respective movements, ranging from Surrealism to the Zero Group, Spatialism to Minimalism, and Conceptual Art to Constructivism. 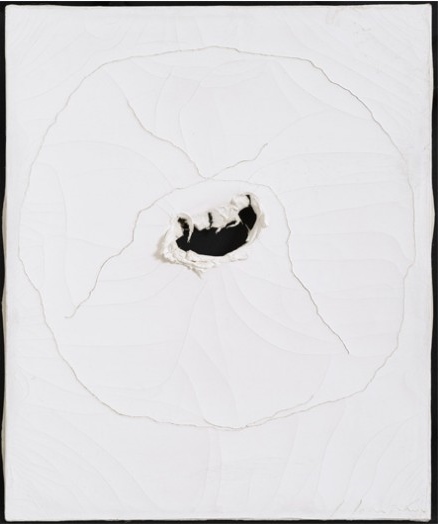 Sotto Voce will be accompanied by a scholarly exhibition book featuring an essay by Dr James Fox of Cambridge University, who specialises in the cultural history of colour. Among numerous media appearances, in 2013 he presented the acclaimed BBC series ‘A History of Art in Three Colours,’ which dedicated an episode to white.

Highlights include Arp’s ‘Composition schématique’ from 1943. Arp created his earliest reliefs at the height of Dadaism during the 1910s, and produced his first monochromatic white-on-white reliefs in the 1920s, developing them further in the 1930s. The present work lies in sharp contrast with his earlier, dreamlike, Surrealist reliefs, with its geometric composition filled with angularity. It dates from the year his beloved wife Sophie Taeuber-Arp tragically died of asphyxiation from the fumes of a coal stove. In his grief Arp slowed down his activities, and indeed ‘Composition schématique’ is one of only a handful of works created during this period. With its forms echoing those of other reliefs made as a monument to his wife, the present work in marble also celebrates the beauty of the Mediterranean, a constant inspiration for Arp.

Ben Nicholson also stands out as an innovator of the abstract white relief; he will be represented in Sotto Voce by ‘White Relief’ (1936) a perfect example from his iconic series. Inspired by European schools of thought such as Abstraction-Création, Bauhaus and De Stijl, as well as his British contemporaries, Nicholson’s white reliefs are a geometric foil to the organic shapes created by Arp, whom Nicholson befriended in France. In the present work, two circles of slightly different sizes peer out from raised rectangles almost of the golden ratio, held up by yet another such rectangle. The gentle echoing of forms creates a pleasing balance. There is a softness to the composition which could not have been achieved with perfect symmetry, and the pure white palette imbues the relief with a level of enlightenment.

The gallery is also delighted to exhibit Manzoni’s ‘Achrome’ from 1958, a fantastic example of his first series of “achromes” created through the marriage of wet kaolin and canvas, which, as they crystallised and hardened, resulted in folds. The final appearance was thus determined solely by the internal energies of the materials, completely independent of the artist’s hand. Our work emanates a primal, “virgin” state of the crude medium, and its colourlessness is integral to the artist’s investigation into nothingness and his aim to create a radical tabula rasa.

At around the same time that Manzoni was producing his achromes, Günther Uecker joined the Zero Group and developed his iconic nail paintings. Sotto Voce will feature his ‘Untitled’ from 1967, a wonderful work in white, which was not only Uecker’s preferred tone but also an essential colour to the Zero Group’s aim of finding purity, newness, and positivity, and a perfect platform to demonstrate the power of light in art. ‘Untitled’, with its neat rows of painted nails quietly lined up, is an ever-changing spectacle for the viewer, leaving him or her transfixed in an optimal performance. Pure and simple yet entrancing, the painting vibrates with a gentle energy and stillness.

Meanwhile, across the Atlantic, art historical progress in Europe was making a mark in South America. Brazilian Sergio Camargo studied under Lucio Fontana at the Academia Altamira in Buenos Aires, and later travelled to Paris where he was strongly influenced by the works of Jean Arp, Henri Laurens, and Constantin Brancusi. His experimentations with abstraction led to the creation of his archetypal white reliefs, comprised of painted wooden cylindrical elements. ‘Untitled (288)’ (1970) is a fantastic example from this series, with its flowing spirals filling up the frame, evoking a movement from the individual part to the multiple whole, floating in a dimension between painting and sculpture, in a constant otherworldly trance. 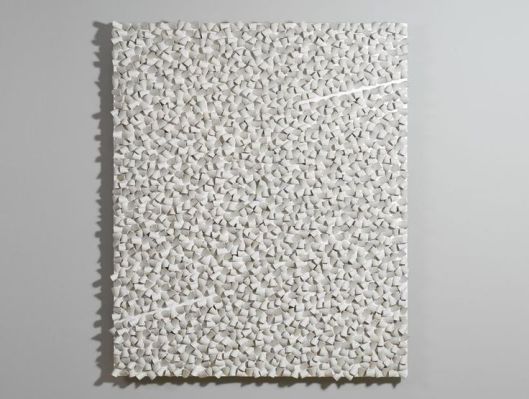