The Jizhou region located in central Jiangsi province produced its best known wares during Southern Song (1127-1279). This was a technically creative period when Jizhou kilns introduced and pioneered new techniques of decoration including tortoiseshell glazes as well as paper cut, glaze resist and naturalistic leaf designs. Called tai mei wen in Song literature, tortoiseshell refers to the shell of the hawksbill sea turtle from which the Chinese made a variety of decorative items. The glaze was apparently made by splashing wood or bamboo ash, probably as an admixture of slip, on the surface of the dark glaze before firing. Light-toned splashes formed in those areas receiving the ash.

The decorative scheme seen on this bowl is called feng-mei-wen (phoenix-and-plum design). The design elements were created with papercut stencils at the Jizhou kilns in Jiangsi province, which were apparently the only kilns in traditional China that used cut-paper stencils to impart resist designs. Once the bowl had dried, it was immersed in the dark-brown glaze. When the glaze had stabilized, the phoenix and plum branch papercuts were affixed to the interior walls and a mixture of wood or bamboo ash mixed with slip was sprinkled over the whole interior. After the drying, the papercuts were removed and the vessel was fired right side up.

Highly respected items of the court during the reign of Emperor Huizong (r. 1101-1125), Jian ware tea bowls from Jiangsu province came in two sizes; this classic example can be considered the larger variety. Appearing bluish black, a deep brown glaze covers the bowl stopping in a thick welt above the foot. Because the molten glaze crawled downward in firing, the lip is left virtually unglazed. In the upper portions, a dense pattern of russet streaks known as « hare’s-fur » extend from the lip toward the vessel floor, both inside and outside the deep bowl. Northern Song (960-1127) texts suggest that these distinctly glazed bowls were used to prepare the white whipped tea then in vogue. 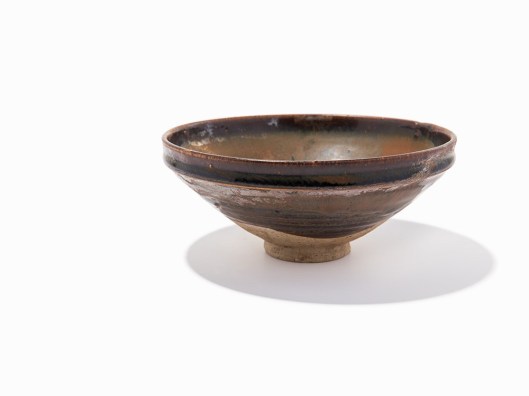 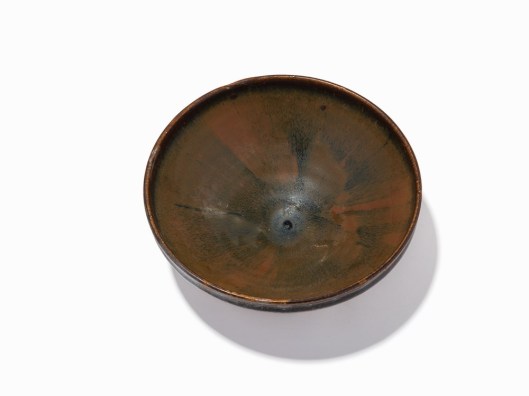 This ‘hare’s fur’ glaze pottery tea bowl is of conical form, with an indented ridge below the mouth rim. The glaze around the exterior is a mottled brown and black with a subtle iridescence and stops above the lower portion of the bowl, exposing the buff clay body. The glaze continues up and around to the interior, where the potter created the ‘hare’s fur’ effect.

Black and dark brown glazed tea bowls became very fashionable during the Song dynasty, as the dark colored glazes created an attractive contrast with the increasingly popular white, frothy teas. This bowl is a larger vessel, and is a rare example in this glaze and size. 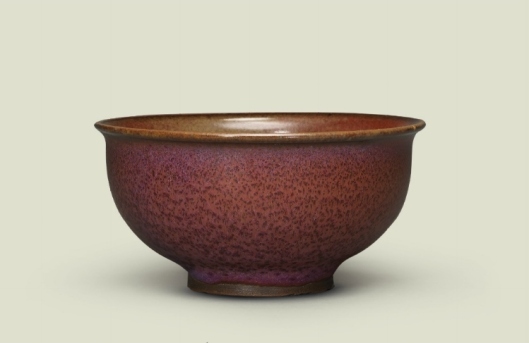 The bowl is finely potted with a gently everted mouth rim. The rounded sides is raised on a low ring foot. Covered on the interior and exterior with a deep purple-red glaze in imitation of Jun ware. Accompanied with a textile woven lidded casing that is embellished with a leather design and secured at one side with a buckle. 4 in. (10.2 cm.) diam., fitted textile box, Japanese wood box

Provenance: Infused tea became more popular in the Ming Dynasty. As it does not require whisking like powdered tea, tea bowls became smaller, as can be seen on the current lot.

PROPERTY FROM THE YIQINGGE COLLECTION

The casing would suggest the bowl was probably given among diplomatic exchanges with Tibet as part of a tea drinking set.
Infused tea became more popular in the Ming Dynasty. As it does not require whisking like powdered tea, tea bowls became smaller, as can be seen on the current lot.

A small Jizhou tortoiseshell tea bowl with conical sides rounding up towards the rim, covered to the interior with papercut decoration reserved in dark brown glaze with hare’s fur markings, the exterior with a dark brown splashed glaze in imitation of mottled tortoiseshell. Diameter 11.8 cm

A Jianyao tea bowl with rounded sides rising to a finger-grooved band below the rim, covered inside and out with a russet-brown glaze falling short of the foot to expose the dark red-brown body. Diamter 12.4 cm