LONDON.- An exceptional example of Baroque opulence, a table top cabinet made by Elias Boscher in Augsburg with Florentine pietre dure panels, was sold for £482,500 (including premium) in Bonhams 5th December European Furniture, Sculpture, and Works of Art sale.

The table top cabinet is a masterpiece of German and Italian craftsmanship, fashioned by Elias Boscher in Augsburg and adorned with Florentine Grand Ducal pietre dure panels.

It belongs to a small group of magnificent table cabinets which were made in Augsburg during the 17th century, commissioned to demonstrate to the intellect and social status of wealthy patrons.

Among this group, this is one of the few examples to bear its maker’s signature. Boscher’s name is printed on the underside, while the silver-gilt mounts are impressed with the hallmark of Augsburg silversmith, Johann Spitzmacher.

The cabinet contains at least 40 drawers and compartments, all lined with exotic silks and intricate wooden marquetry. A number are hidden and disguised, and a new compartment was rediscovered only recently while the previous owner’s grandchildren were playing.

The cabinet itself was only rediscovered in 2006, and represents a significant addition to this exceptional category of furniture.

It had been acquired during the first half of the 19th century by Sir Charles Henry Coote, 9th Baronet (1792-1864), for his country house at Ballyfin in County Laois. It remained in the family until it was sold in 2006.

Camille Mestdagh, Senior European Furniture specialist at Bonhams, said: ‘We are delighted that this exceptionally rare cabinet, belonging to a distinguished group featuring examples in major international museum collections, has found a new owner. It represents both the highest calibre of Augsburg cabinet-making, and the finest pietre dure work produced by the Florentine Grand Ducal workshops during the 1660s.’ 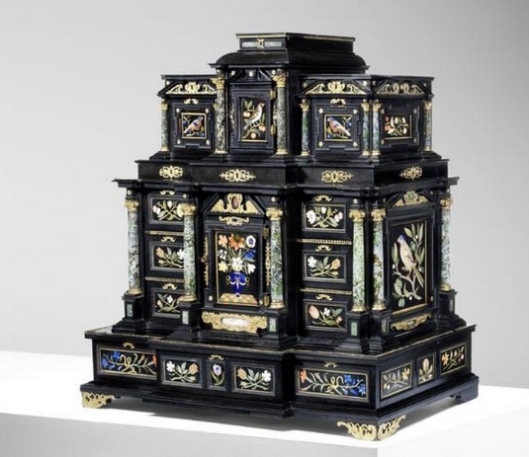 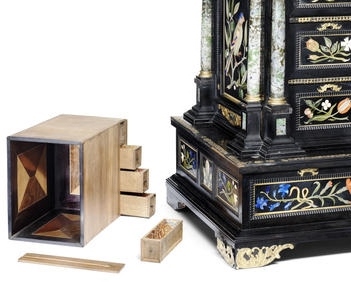