Intended for serving warmed wine, this ewer, its fitted cover, and warming basin form a rare, complete set of what was once standard tableware for middle- and upper-class Northern Song society. This fine quality, early porcelain was refined during the tenth century at Jingdezhen in southeast China. Porcelain stone was mixed with white kaolin clay to produce a whiter more plastic body with a wide firing range. Although often thinly potted and delicately formed, the translucent hardness of Qingbai ware made it extremely serviceable, and it appealed to a wide market both domestic and foreign. The blue-tinted glaze could, as the case is here, appear almost white. The faint blue color is due to a reducing kiln atmosphere provided by the pine wood fuel that was used. While utilitarian standard Song forms were commonly produced at most Qingbai kilns, metal-derived shapes like this faceted ewer and its lobed basin were apparently peculiar to the kilns of Jiangxi province. In spite of its utility, aesthetic refinement, and popularity, Qingbai porcelain was not appreciated at court. Remarkably, it wasn’t until the Ming dynasty that fine porcelain began to garner court sponsorship. 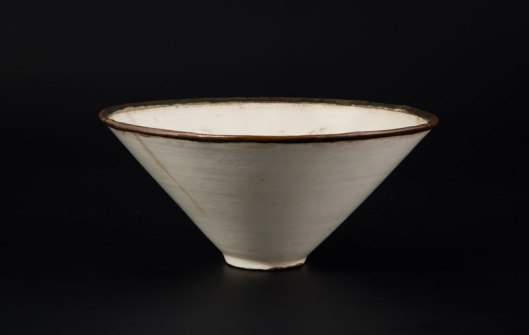 The vessel is potted in the form of a bowl with a flat everted rim, supported on a tall pedestal encompassing a narrowly fluted flange above a splayed foot, piered with three ruyi-form apertures. It is covered in a transluscent glaze, pooling to a bluish tinge around the rims and incised areas. 4½ in. (11.4 cm.) high

Exhibited: Museu Nacional do Azulejo, From Ritual to Daily Use. Chinese Ceramic from Francisco Capelo Collection, Lisbon, June 2009, catalogue no. 59. 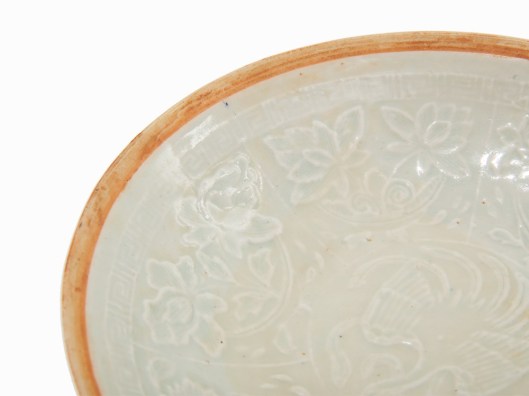 This thinly potted dish features a press molded design of a phoenix surrounded by various flowers. The piece is covered in a bluish-white glaze, typical of Qingbai ware, with a bare rim.

The vase is crisply carved with a broad band of scrolling lotus, all under a translucent glaze of pale aquamarine tone pooling in the recesses, ending in an irregular line above the foot exposing the white biscuit body. The cover is carved on the top with a spray of lotus. 13 3/4 in. (34.9 cm.) high, box

Notes: Starting from the early Northern Song dynasty, kilns at Jingdezhen achieved success in producing very fine white-bodied porcelain covered with an illuminous glaze of icy blue tinge, earning the name qingbai, ‘blue white’, or yingqing, ‘shadow blue’. The exquisite quality of qingbai porcelain was widely recognised, and the Southern Song ceramic historian Jiang Qi mentioned in his treatise Tao ji (Ceramic Records) that white porcelain produced at Jingdezhen was so refined and pure that it was known as Raoyu, ‘jade of Rao’. Raozhou was the name of the region in which the Jingdezhen kilns were located.

Although many meiping vases originally had covers, very few have retained them. Thus the current qingbai meiping is rare not only because of its decoration, but especially since its cover has been preserved. A meiping without cover, carved with similar motifs but with broader shoulders is illustrated in Sekai toji zenshu, vol. 12, Song, Tokyo, 1977, pl. 30; another is illustrated in Mayuyama Seventy Years, Tokyo, 1976, pl. 417.

A small Qingbai chrysanthemum bowl, the porcelain-like body covered with a transparent, crackled, light greenish glaze except for the base. Diameter 10.5 cm

A Qingbai round box and cover, the porcelain-like stoneware covered with a bluish-white glaze. Song Dynasty (907-1279). Diameter 9.6 cm.

The figure is modelled with the upper body gently leaning forward, seated with legs crossed and arms folded under a voluminous robe. The garment is worn in folds falling loosely across the broad shoulders, exposing a bare torso embellished with bejewelled jewellery chains. The slightly downturned head crowned with a floral diadem above pendulous ears framing naturalistically carved facial features providing a serene expression. One hand is raised in front of the chest in vitarka mudra, gesture of teaching, and the other is placed downturned above the right knee. Covered with a characteristic pale blue glaze, pooling in recesses. The flat base is unglazed. 12 1/2 in. (32 cm.) high, wood stand, box

This graceful bodhisattva emanates serenity, and has a compassionate, but commanding, presence. The figure sits cross-legged, with the left arm bent at the elbow and the hand raised to chest height. The tip of one finger touches the tip of the thumb, forming a circle, in a gesture known as vitarkamudra – the gesture of discussion, which is associated with a bodhisattva explaining the teachings of the Buddha. A bodhisattva is a being who seeks bodhi (awakening) and is on the path to becoming a Buddha. While in Mahayanist Buddhism there are bodhisattvas at various stages along this path, this figure is undoubtedly intended to represent one of the ‘celestial’ bodhisattvas who have great wisdom, compassion and miraculous powers. It is the compassion of such bodhisattvas that leads them to endeavour to guide ordinary beings towards enlightenment. This bodhisattva figure inclines very slightly forward, as if to give reassurance to the believer who is being instructed. The face has a gentle expression, with the eyes downcast and the mouth forming a tender smile.

Yuan dynasty Buddhist figures made in porcelain and covered with a qingbai glaze, developed from the tradition of finely-modelled religious figures made at the Jingdezhen kilns during the Southern Song period (1127-1279). There is a very small extant group of these Song figures in international collections. Inscriptions and the date of tombs in which these figures have been found suggest that they were made in the second and third quarters of the 13th century – just prior to the Mongol conquest. The majority of the extant figures of this type have been discovered in the south of China, within territory controlled by the Southern Song, however at least one has been found in the north, in Jin dynasty (1115-1234) territory, and suggests that the figure was regarded as valuable enough to warrant being taken hundreds of miles into lands controlled by the Jurchen.

A seated Guanyin, which was only partly glazed – as is usual in the case of these Song dynasty figures, is now in the Shanghai Museum (1). This figure, which has glaze on the edge of her outer robe and a little pigment adhering to the unglazed areas, bears an inscription dating it to the 11th year of the Shunyou reign of the Southern Song dynasty, equivalent to AD 1251. Another seated Guanyin with outer robes and rocky pedestal covered in qingbai glaze, but with other areas biscuit fired, was excavated in 1978 from a Song dynasty well in Changzhou City, Jiangsu province and is now in the Changzhou Museum (2). These figures are seated with both legs pendent. Another Guanyin figure from the end of the Southern Song period was excavated in the early 1980s in Quzhou, Zhejiang, from the tomb of Shi Shengzu, dated to the 10th year of the Southern Song Xianshun reign (AD 1274). Although this latter figure is somewhat damaged it is clear that the rocky pedestal on which it sits is covered with qingbai glaze, while the bodhisattva herself is biscuit fired and would have been cold painted. In view of the popularity of this pose in the Yuan period, it is interesting to note that this bodhisattva appears to have been seated in Maharaja lilasana with one leg pendent and the other raised to allow her arms to rest on the raised knee (3). Two Southern Song figures, which are seated cross-legged, are also known. These are a partly glazed figure of Guanyin, which was found in 1964 in the foundations of a Jin dynasty pagoda at Fengtai, Beijing. This figure is now preserved in the Capital Museum, Beijing (4). The other cross-legged Guanyin, which is so similar to the Fengtai figure that it may have been made using the same mould was sold by Christie’s Hong Kong in June 2011, lot 3726 (fig. 1). In the case of all these figures, and those of the Yuan dynasty, the basic form was moulded and then the details were hand finished, after which the intricate appliques were put in place to create features such as tendrils of hair, scarves, and elaborate jewellery.

While the Southern Song figures are all only partly glazed, this is not usually the case in the Yuan dynasty, when the figures are generally fully glazed, as in the case of the current figure. However, in a small number of instances, lacquer replaced cold painting on partially-glazed qingbai Buddhist figures. This can be seen on a seated, qingbai glazed, figure of the Buddha Amitabha is in the collection of the Beijing Art Museum (5). This figure, dated to the Yuan dynasty, has robes, which are partially lacquered, apparently over areas of the porcelain left free of glaze. Gilded designs, representing the patterns on the robe are painted on the lacquered areas. The partial glazing of a similar Yuan dynasty seated qingbai Buddha in the collection of the Shanghai Museum (6), suggests that it too would originally have had lacquer applied to the unglazed parts of its robe. The lacquer seems to have adhered rather tenuously to the porcelain and was very susceptible to damage, which would explain why none can now be seen on the Shanghai figure. These figures are 51 cm. and 41.3 cm. in height, respectively – somewhat larger than the extant Southern Song figures. A Yuan dynasty seated Guanyin in the Nelson-Atkins Museum of Art, Kansas City, dated by inscription to AD 1298 or 1299, is 51.4 cm. tall, and is fully glazed except for the figure’s underskirt, which has been left unglazed, possibly to allow better adhesion of cold painting (7) (fig. 2).

The majority of the Yuan dynasty figures are both fully glazed and, like the three figures discussed above, are sometimes notably larger than the Southern Song figures. The famous qingbai glazed Yuan dynasty Bodhisattva seated in Maharaja lilasana, which was excavated in 1955 from Dingfu Street in the western suburbs of Beijing, is 67 cm. tall. This figure is now in the Capital Museum, Beijing (8). Another qingbai glazed seated Bodhisattva in the collection of the Rietberg Museum, Zurich, is 52. cm. tall (9), and the Yuan dynasty qingbai glazed seated bodhisattva in the Metropolitan Museum, New York is 50.8 cm. tall (10). A bodhisatta in the collection of Mr. Alan Chuang is notable for its particularly fine jewellery and also its size – it is 67 cm. high. The appearance of larger figures in the Yuan dynasty towards the end of the 13th century can be explained not only by changing tastes, but also by changes in technology, specifically to the porcelain body material used at Jingdezhen. The new body material contained more kaolin and thus more alumina, which facilitated the production of larger figures, and indeed vessels. However a number of extant Yuan dynasty figures are only slightly larger than their Southern Song counterparts, and a particularly graceful Yuan dynasty Guanyin in the collection of C.P. Lin (11) is of similar height to the current figure, while a Yuan Guanyin in the collection of the Victoria and Albert Museum (12) is slightly smaller than the current figure.

PROPERTY FROM THE YIQINGGE COLLECTION