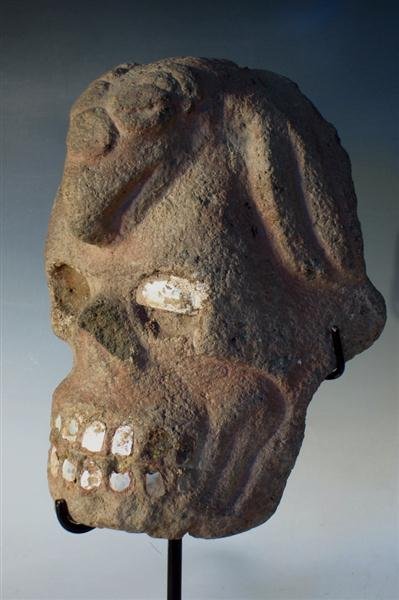 Everything in the auction is an authentic, quality item. All art has been legally acquired and is legal to sell. All auction lots can be viewed online or by visiting the gallery now through Jan. 17, 2015. The auction features numerous lots of ancient Pre-Columbian art including items selected from the Wally Katz collection and selected fine quality lots from the collection of Walter Knox in Scottsdale. 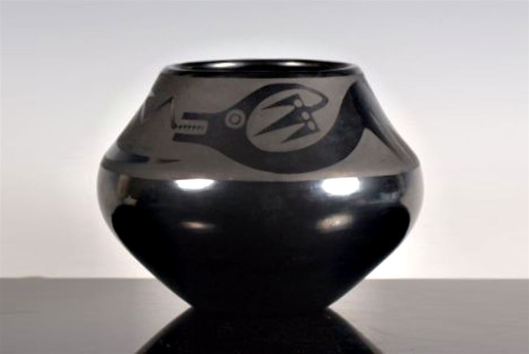 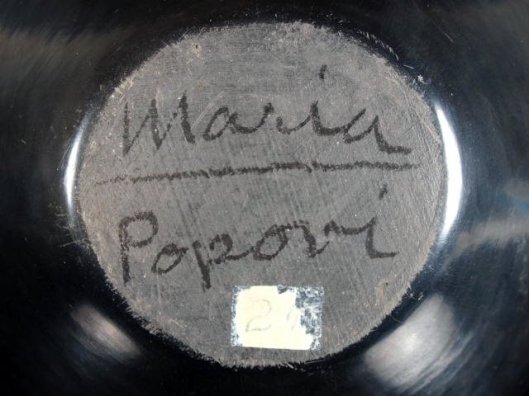 Substantially sized, flawlessly potted, polished, and painted. An Avanyu (mythical horned water serpent) encircles the jar from just above the shoulder to just below the rim. The image is painted in the negative, Maria’s signature technique. Borderline gunmetal finish. The body of work Maria created with her son Popovi is widely considered to be the finest of her long career. This stunning jar is a prime example of Maria’s artistry at its peak. Signed Maria / Popovi as shown. 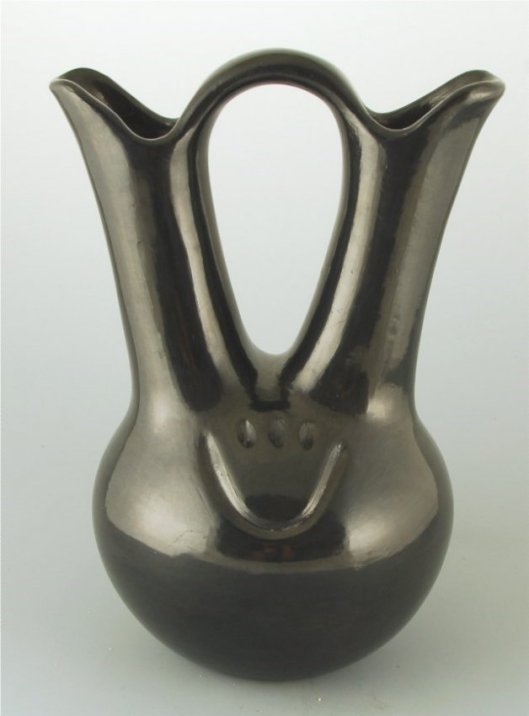 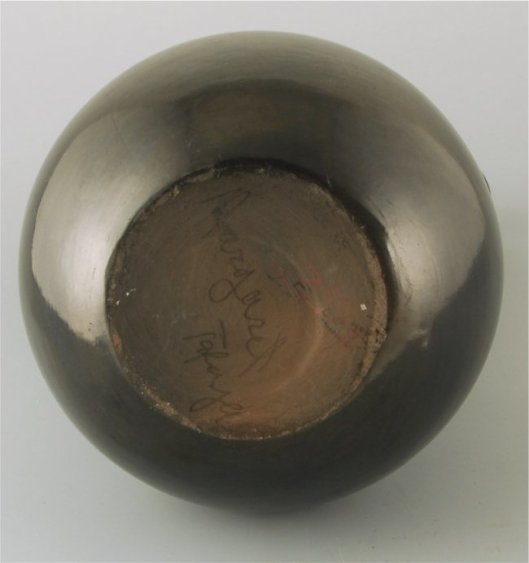 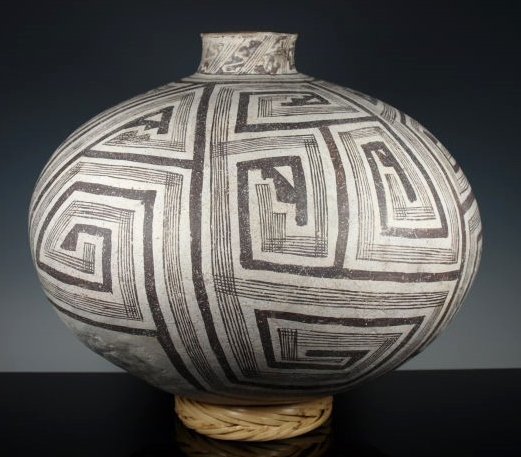 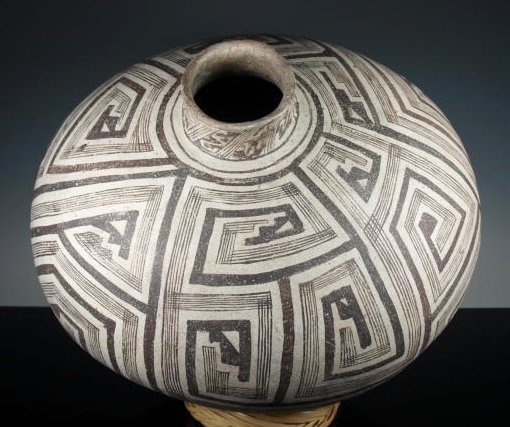 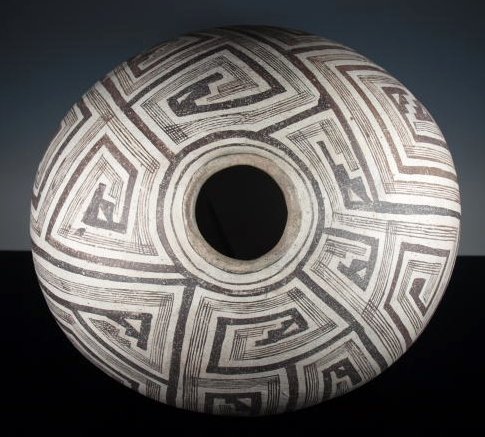 Mogollon refers to the pre-historic site which bordered the Anasazi and Hohokam in the Central valley. This massive, 13 inches tall and 15 inches diameter is done in interlocking stair step designs, beautiful rim. The paint is bold and really stands out in a room. Comes with display ring. A wonderful and rare piece being offered at a fraction of its value. Legally excavated on private ranch.

Reassembled by a museum qualified restorer, restoration is barely visible, reassembled from approx. 10 pieces, which is expected in ollas of this size.

The second group of offerings is ancient Pre-Columbian artifacts including important pieces such as a Costa Rican Jaguar jar from the museum displayed estate of Wallace Katz NY., and an impressive and rare Chupicuaro Female Figure from Arte Primitivo and the collection of Walter Knox along with over a hundred other lots of authentic pre-Columbian art. 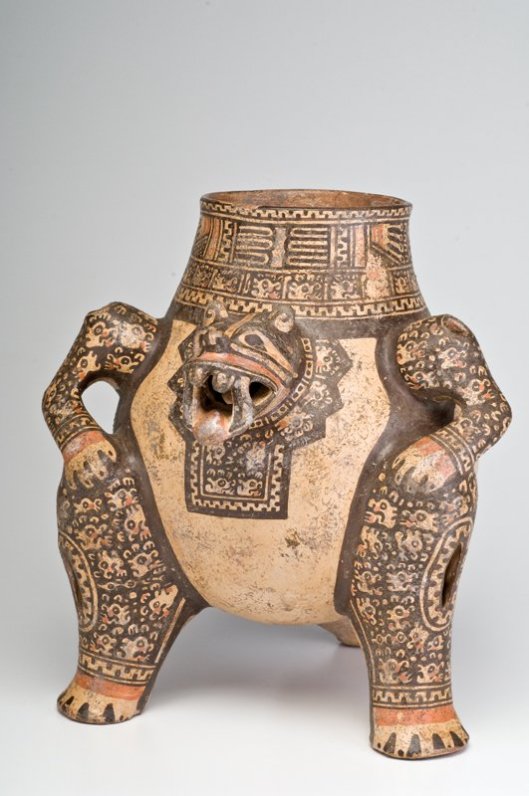 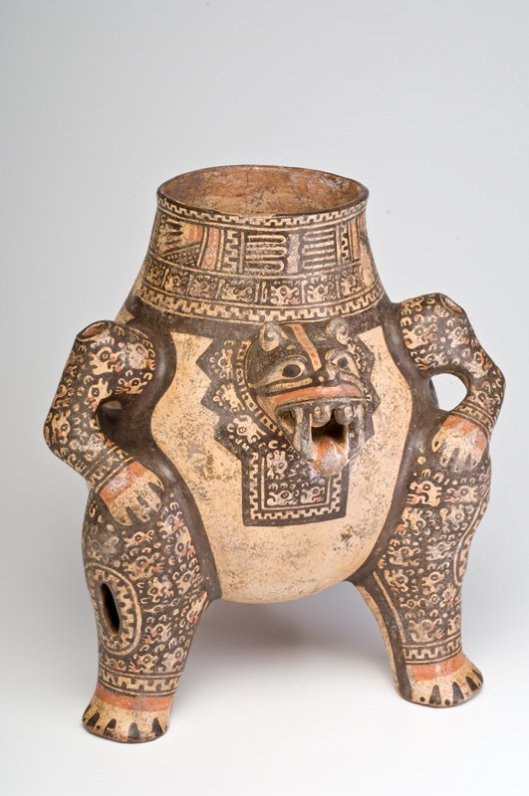 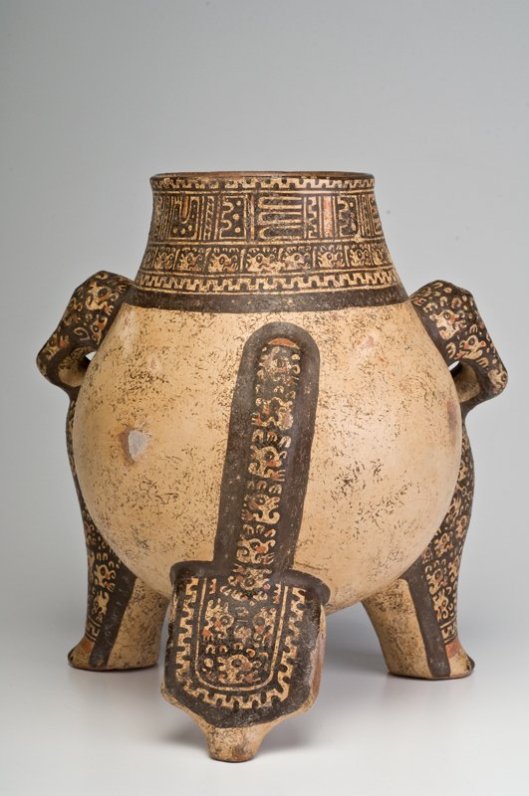 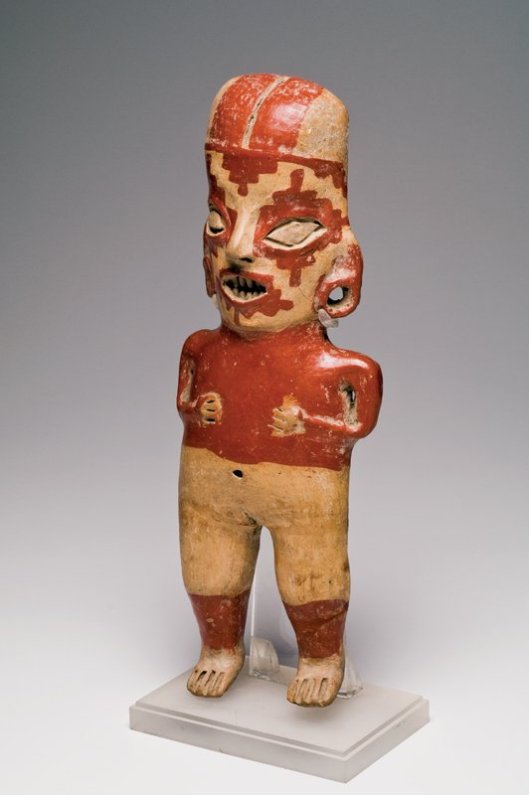 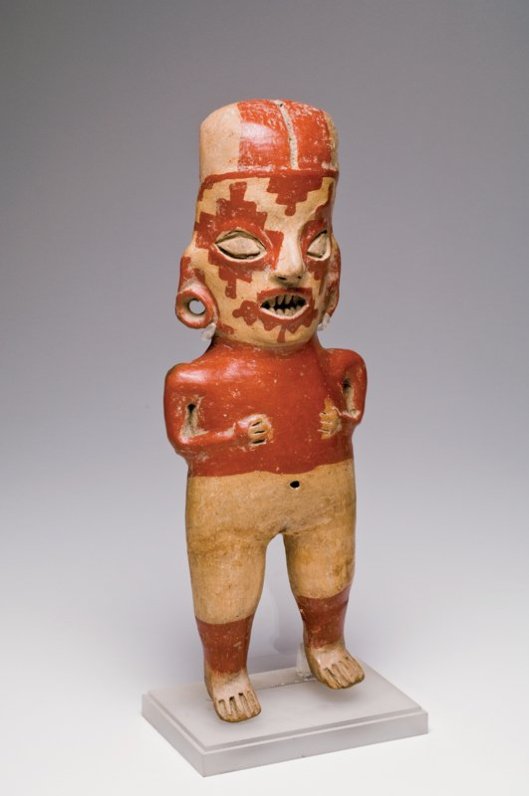 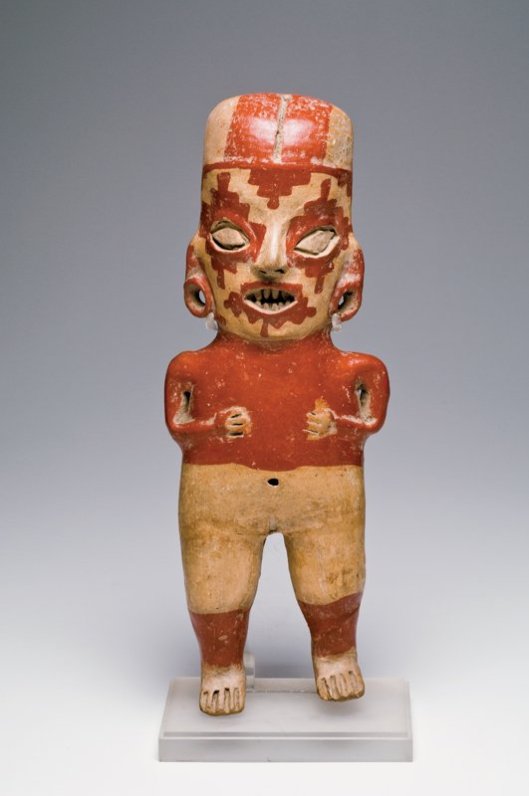 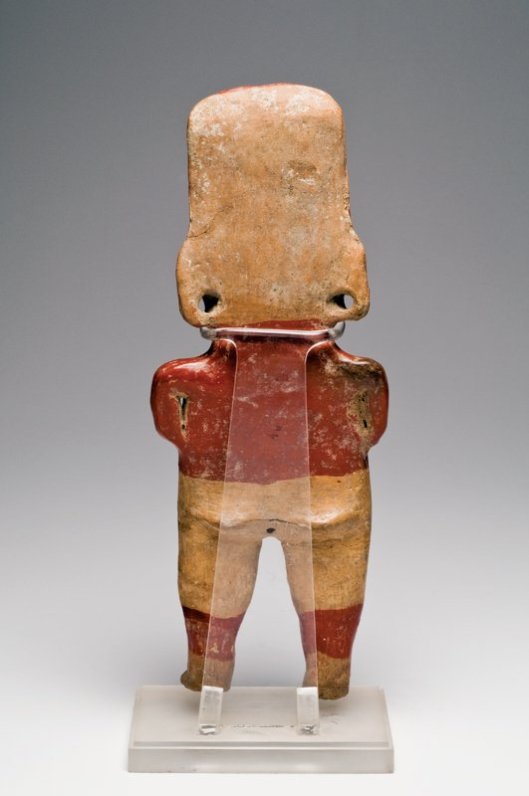 Next a fine offering of world class Asian artifacts including a very large Han Dynasty 250 AD warrior and an absolutely breathtaking Tang Dynasty horse, 24 inches tall with a Thermoluminescence test from Oxford dating the pieces to the Tang Dynasty 618 AD – 906 AD and a beautiful India sandstone sculpture, ca. 900 AD – 1100 AD of a sexy female form of Madhya Pradesh over 23″ tall. 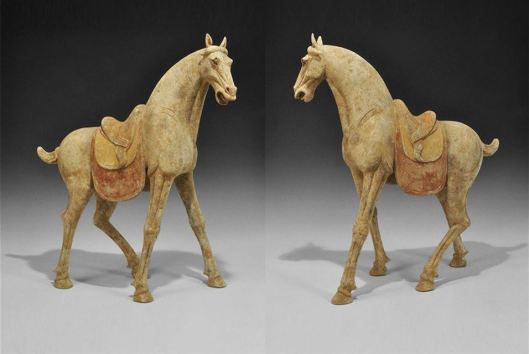 the goddess of nature standing in a graceful tribhanga with her hips swung to the right, wearing a long dhoti, wide beaded belt with three beaded festoons suspended from her waist. Beaded collar with central beaded strand falling between her ample, rounded breasts. Some minor losses and normal surface weathering. Mounted on a custom metal base.

in active pose with arched neck and head slightly tilted; the musculature carefully defined to the neck, chest and legs; the mouth open showing power and aggression; shallow channel to the rear of the neck to accept a separate mane; the saddle and saddle blanket carefully molded, colored with orange and ochre pigment; the tail shown docked and bound. Similar in style to the Sancai but this one is painted and not glazed. The quality of this sculpture and it’s size suggests that it was for a royal tomb or a high ranking person. 8 kg, 61 cm (24″). 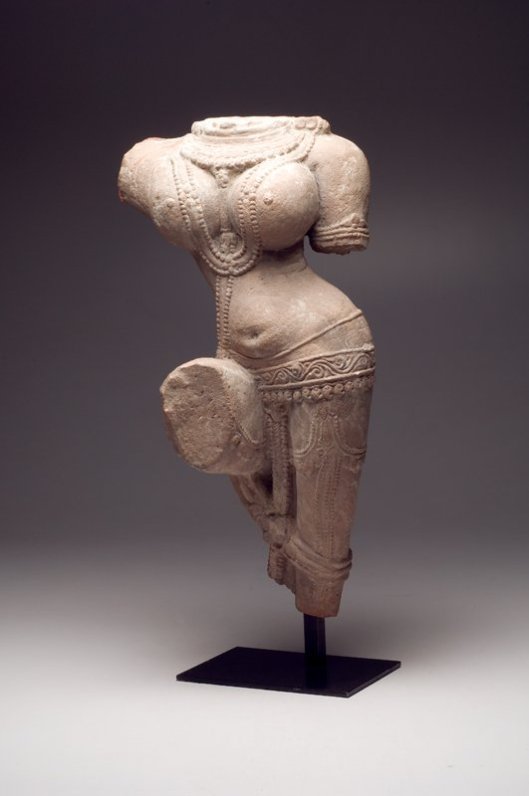 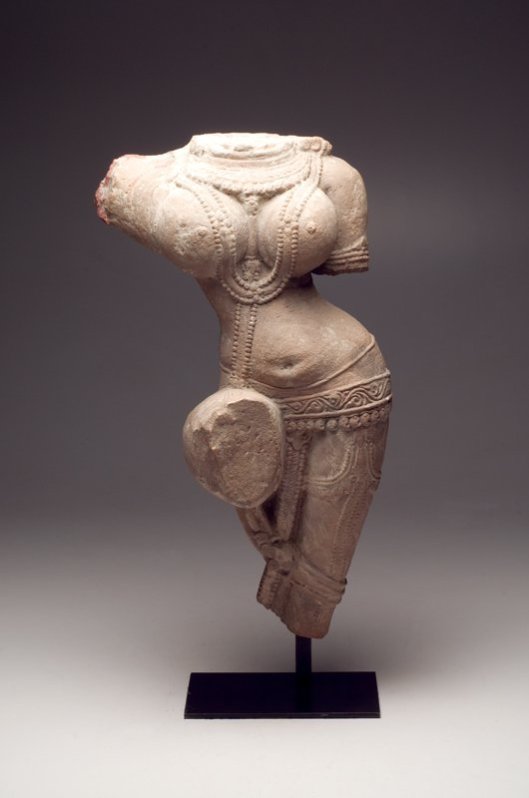 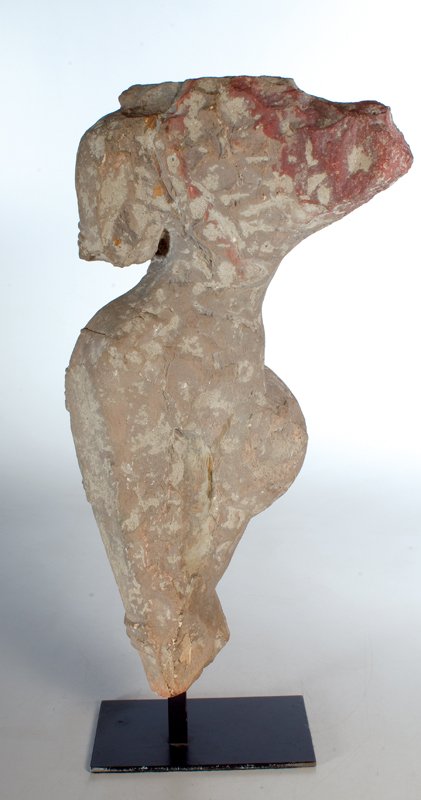 the goddess of nature standing in a graceful tribhanga with her hips swung to the right, wearing a long dhoti, wide beaded belt with three beaded festoons suspended from her waist. Beaded collar with central beaded strand falling between her ample, rounded breasts. Some minor losses and normal surface weathering. Mounted on a custom metal base. Size: 23-1/2inch. 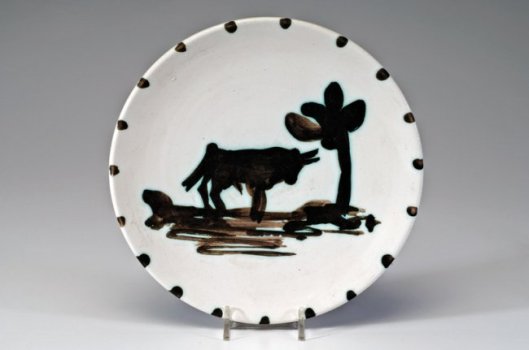 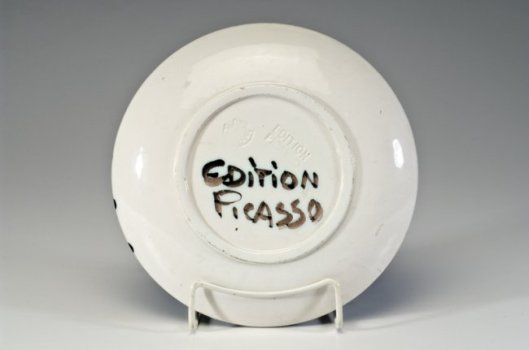 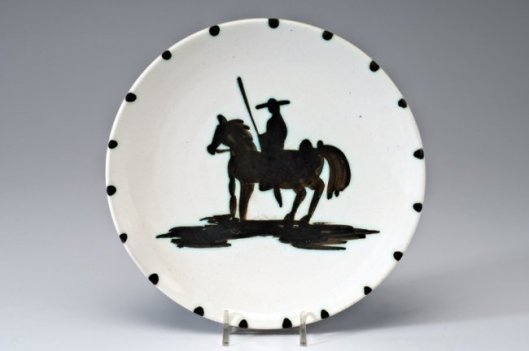 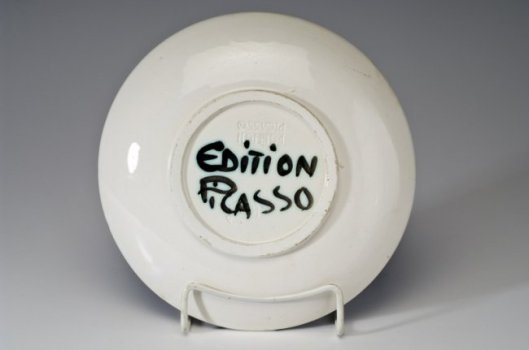 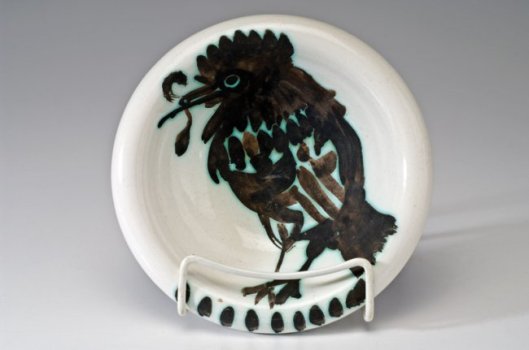 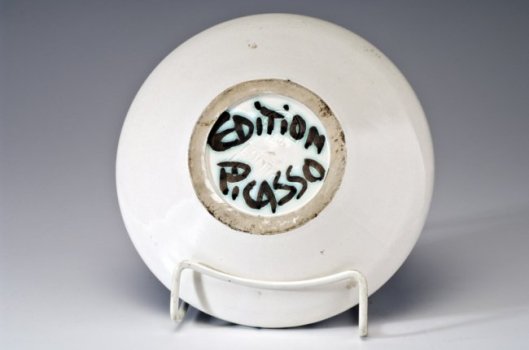 These works are stamped ‘Edition Picasso,’ and glazed ‘Edition Picasso,’ on the reverse
In 1946 Picasso in Golfe Juan with his friend Louis Fort, decided to visit the pottery exhibition in Vallauris. He took a particular interest in the Madura stand and asked to be introduced to the owners – Suzanne and Georges RamiÃ©. They invited him to their Madura Pottery workshop in Vallauris. There he made three pieces which he left to dry and bake.
A year later Picasso returned to see how the pieces had turned out. He was delighted with the quality of the work and asked if he could make more. They agreed and an area of the workshop was arranged especially for him. Immediately, he began to work, inspired by his portfolio of sketches. So began a long and very productive partnership between Picasso and Madura. The whole Madura team became part of the creative process. They made sure Picasso had all the materials he needed and assisted in producing perfectly finished works of art. Suzanne RamiÃ© shared her vast experience, teaching him all the secrets of ceramics.
The ceramics ranged from vases, sculptures, plaques to even a complete dinner service. The familiar themes included bullfighting scenes, portraits and nature – goats, birds, and fish. In 24 years over 633 pieces were created in limited editions all engraved with the Madura stamp.
Literature: RamiÃ©, Alain, 1988, Picasso, Catalogue of the Edited Ceramics 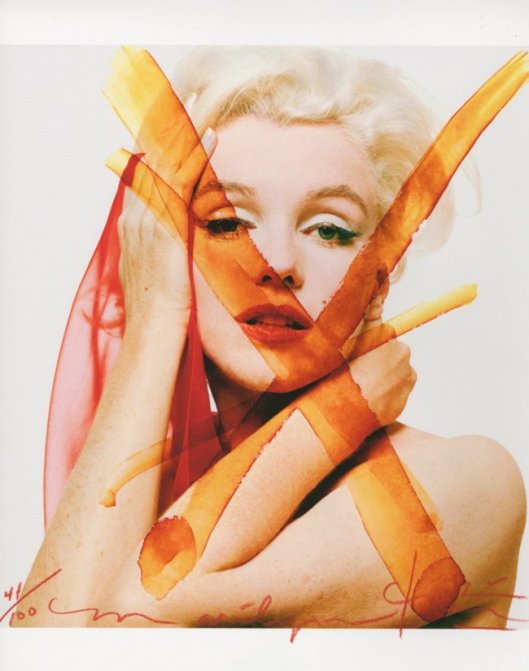 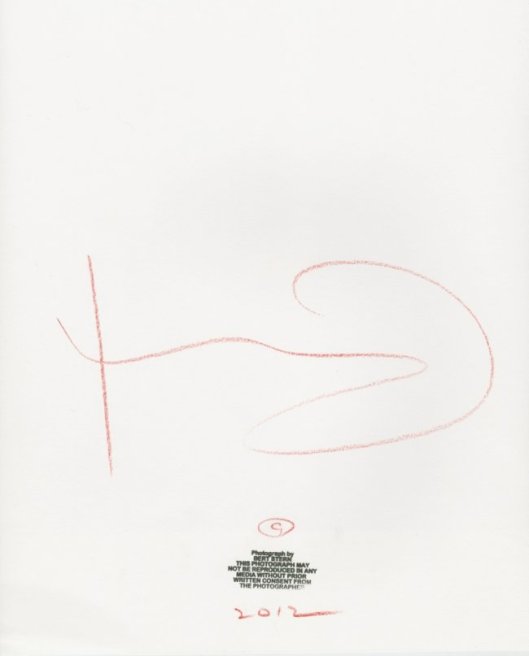 If you are in Scottsdale we invited you to stop by and preview the auction at 7056 E. Main St. Scottsdale, AZ. Please call ahead (480) 703-3122 the owner of the gallery, invites you to visit in-person, no appointment needed. A printed copy of the current auction Catalog is available upon request through the website www.scottsdaleauctions.com

Scottsdale Auctions & Appraisals is a brick and mortar gallery located in the art of the Scottsdale gallery district. We also specialize in auctions of small collections to entire estates on staff specialists and experts in Pre-Columbian Art, Classical and Egyptian Antiquities, Asian Antiquities and Antiques and Ethnographic Art including Native American collectables and Navajo weavings. The gallery conducts absentee internet auctions approximately 6 times a year, plus special exhibitions, retail, and private sales. We offer free appraisals and can assist in museum donations and authenticity testing.