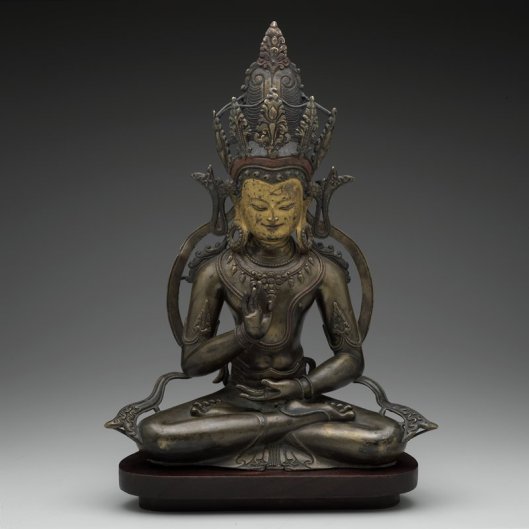 This bronze image of a crowned Buddha in the pose of meditation (dhyanamudra) represents Amoghasiddi, one of the five transcendental Buddhas of the Vajrayana pantheon. The system of esoteric Buddhism known as Vajrayana evolved a hierarchy with the supreme (Adi) Buddha at the top, from whose meditations emerged the five transcendental Buddhas, each of which was associated with a direction. The Buddha Amoghasiddi represents the north.

Made around 1300, this statue relates stylistically to images made in the Shalen Monastery in Central Tibet. It belongs to an early tradition of sophisticated casting imbued with a spirit of naturalism and fine proportions. The style derives from Pala Indian Buddhist sculpture of the tenth and eleventh centuries.