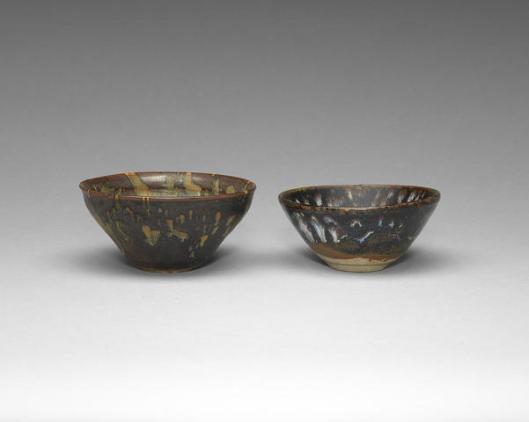 Each decorated with variegated splashes to the interior and exterior on mottled russet and brown glazed grounds, variously falling short of the foot and lower body to reveal the buff pottery. The largest 12.2cm (4.7/8in) diam. 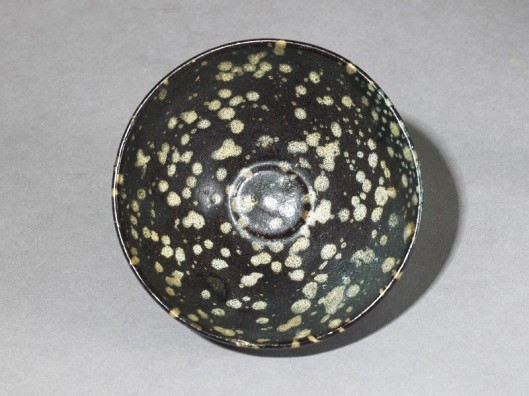 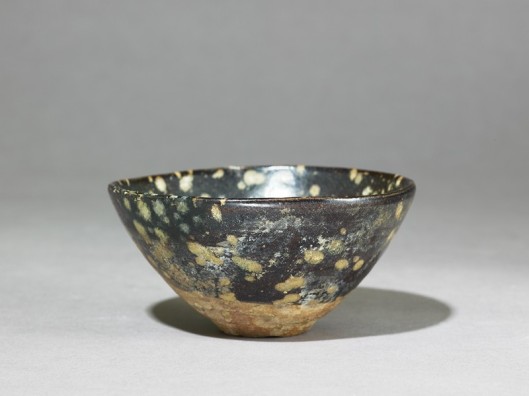 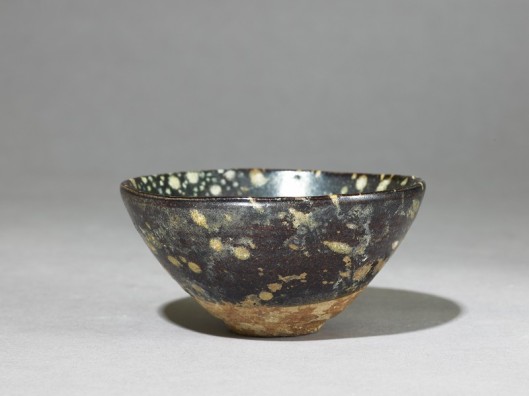 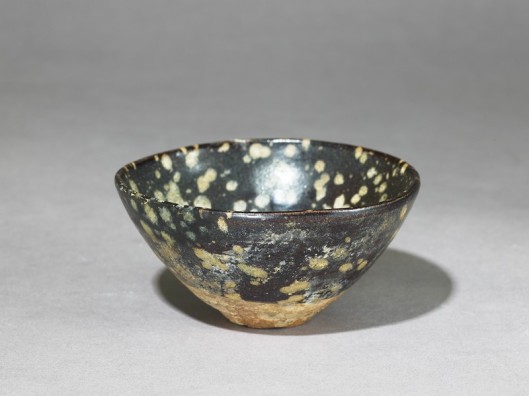 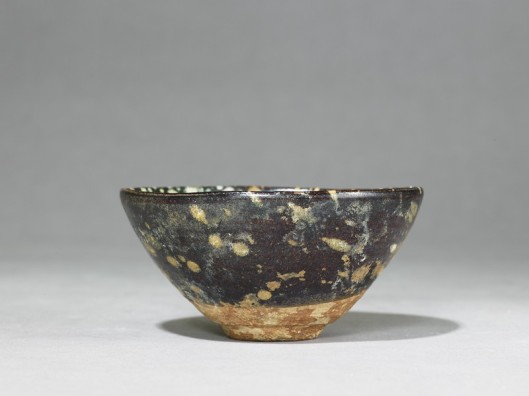 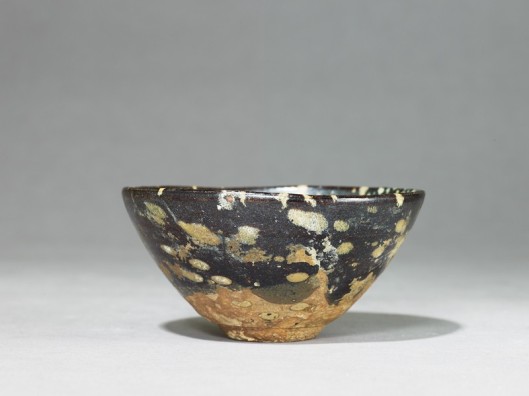 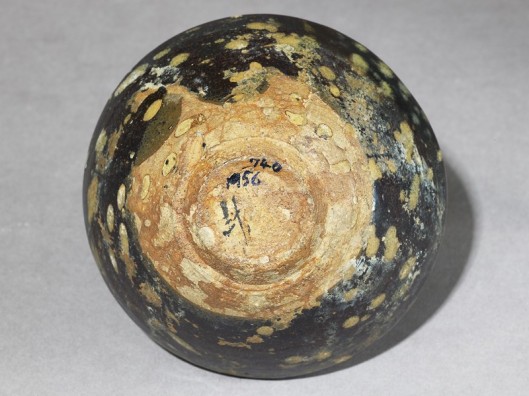 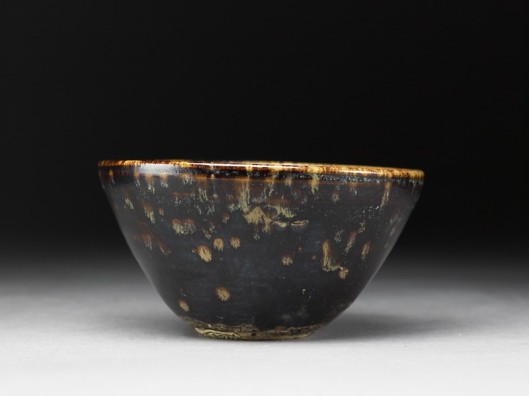 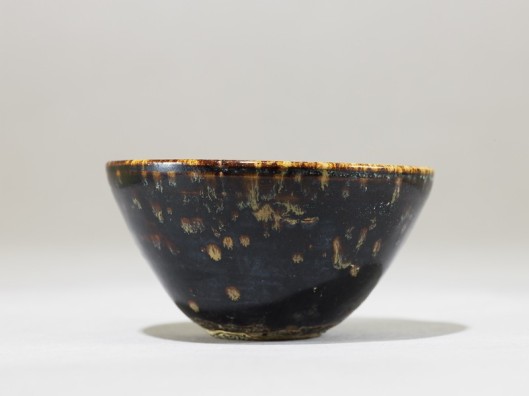 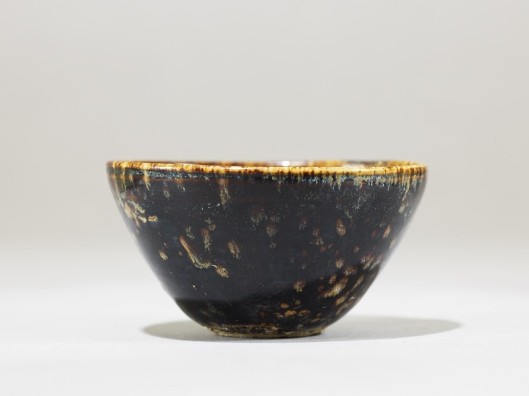 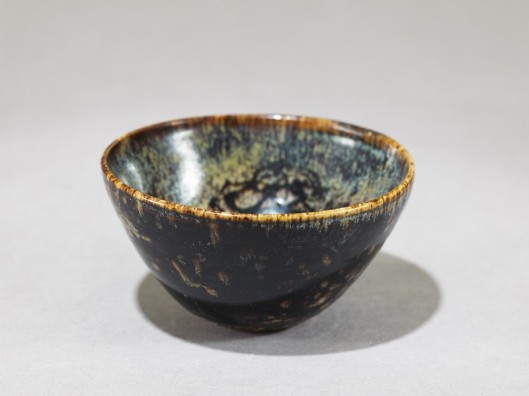 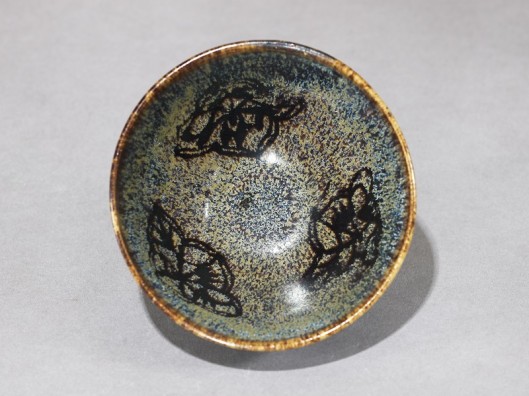 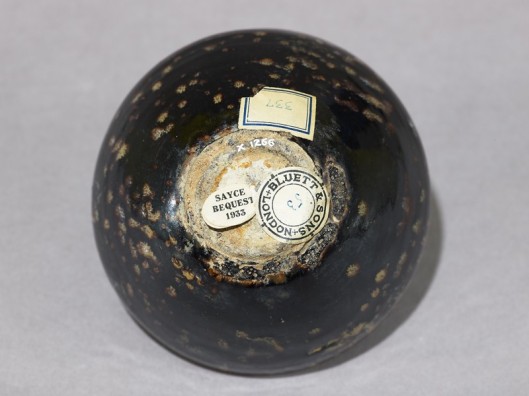 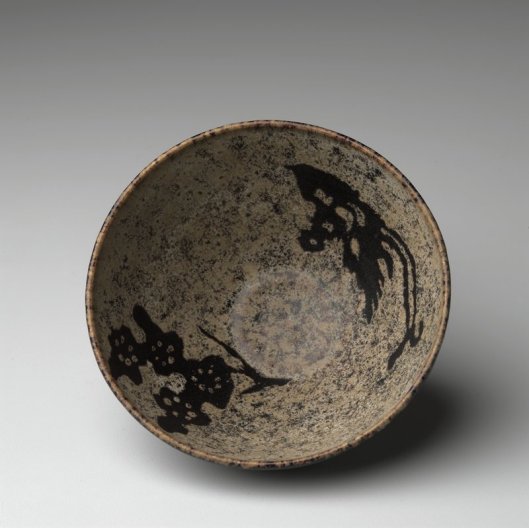 The decorative scheme seen on this bowl is called feng-mei-wen (phoenix-and-plum design). The design elements were created with papercut stencils at the Jizhou kilns in Jiangsi province, which were apparently the only kilns in traditional China that used cut-paper stencils to impart resist designs. Once the bowl had dried, it was immersed in the dark-brown glaze. When the glaze had stabilized, the phoenix and plum branch papercuts were affixed to the interior walls and a mixture of wood or bamboo ash mixed with slip was sprinkled over the whole interior. After the drying, the papercuts were removed and the vessel was fired right side up. 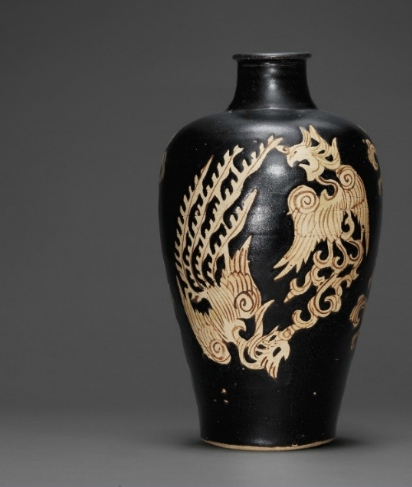 The vase is resist-decorated on two sides with a pair of fenghuang amidst cloud scrolls that are detailed in brown slip, and reserved against a dark brown glaze that continues over the lipped mouth rim and falls to the edge of the foot. 11 in. (28.1 cm.) high, box

Notes: The fenghuang, or phoenix, comprises feng, the male and huang, the female bird. They can be differentiated by their tails; the male with his segmented into four filaments and the female with a fanciful scroll for its tail. The phoenix is an auspicious bird that has traditionally represented peace and prosperity.

The delicate decoration on this meiping was produced by first affixing a stencil to the surface and then immersed foot-first in a dark brown glaze. When the glaze stabilized, the stencils were removed to reveal the reserved designs which were further painted with an iron-rich slip. 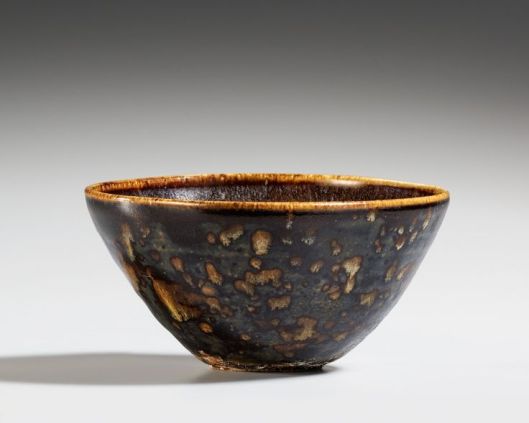 A small Jizhou tortoiseshell tea bowl with conical sides rounding up towards the rim, covered to the interior with papercut decoration reserved in dark brown glaze with hare’s fur markings, the exterior with a dark brown splashed glaze in imitation of mottled tortoiseshell. Diameter 11.8 cm 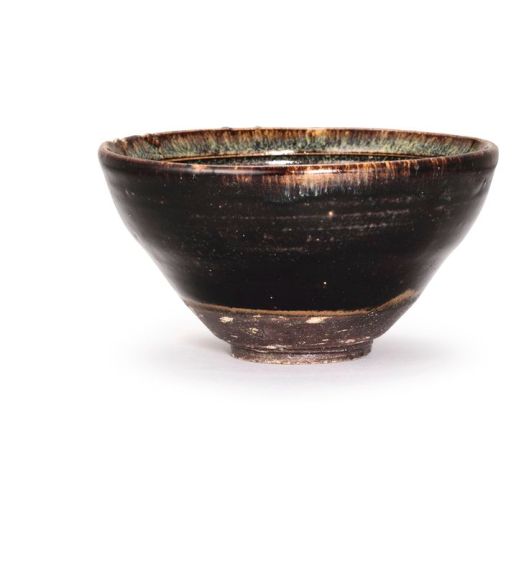 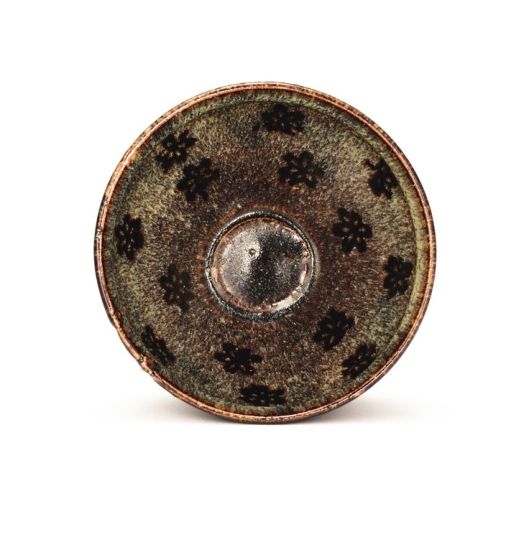 robustly potted with deep rounded sides rising from an angled foot to an indented rim, the interior with a papercut decoration of plum blossom florets reserved on a black glaze against yellow and pale blue drizzly striations, the exterior covered with a black glaze transmuting to russet at the rim, save for the lower part of the bowl and footring left unglazed and dressed in a brown wash; 12.2 cm., 4 7/8  in. 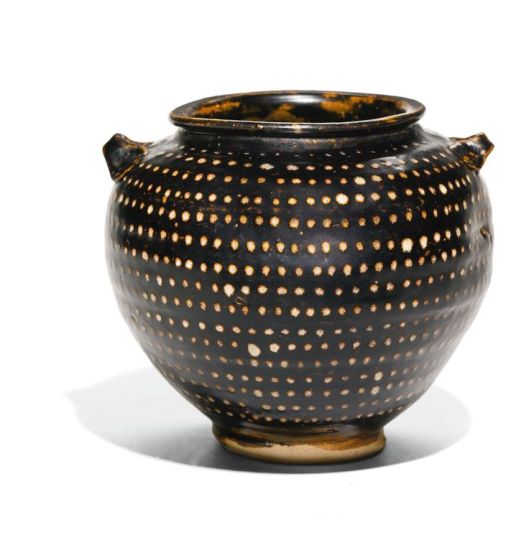 the elegantly potted ovoid body with broad rounded shoulders, finely decorated with rows of white spots on a glossy dark brown ground, stopping short of the foot, with two lug handles applied to the shoulder below the short neck; 15.3cm., 6 1/8 in.

Notes: The attractive spotted pattern, also known by its Japanese name temmoku, seen on the present jar, can be found on a variety of ‘Jizhou’ wares, suggesting that it was an especially popular motif in the potters’ repertoire. For examples of jars decorated in this manner see one with a rounded body and a wide neck illustrated in Regina Krahl, Chinese Ceramics from the Meiyintang Collection, vol. 3, pt. II, London, 2006, pl. 1555; and another compressed globular jar sold in these rooms, 19th June 1984, lot 200. Meiping can also be found decorated in this manner, but with the evenly distributed spots generally arranged in diagonal spirals towards the foot; see a meiping sold in these rooms, 13th July 2005, lot 139; and another sold at Christie’s London, 14th December 1987, lot 168. 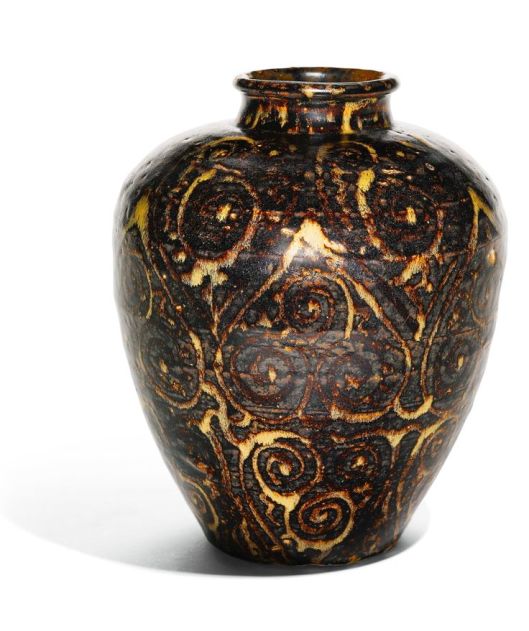 the rounded shoulders tapering gently to the foot, surmounted by a slightly waisted neck with lipped rim, covered overall in a rich dark brown glaze forming the ground for the ‘guri lacquer’ style motif picked out in a speckled buff tone, the design formed from upright ruyi heads enclosing tight scrolls above corresponding pendent ones; 21cm., 8 1/4 in.

Notes: The design on this jar is after contemporary carved guri style lacquer vessels with the smooth brown glaze applied to recreate the feel of a lacquer ware. The same motif can be found executed in repousse silver; for example see a silvermeiping and cover excavated from a Song hoard in Deyang county, Sichuan province and now in the Sichuan Provincial Museum, illustrated in Zhongguo meishu quanji. Gongyi meishu bian, vol. 10, Beijing, 1987, pl. 99.

While guri style decoration is commonly found on ‘Jizhou’ bowls and smaller vessels; for example see a bowl illustrated in R. L. Hobson, The George Eumorfopoulos Collection Catalogue of Chinese, Corean and Persian Pottery and Porcelain, vol. 6, London, 1928, pl. XV, no. F77; and another in the Metropolitan Museum of Art, New York, published in Suzanne G. Valenstein,A Handbook of Chinese Ceramics, New York, 1989, pl. 113, it is rare on vases and larger wares such as the present meiping. However, a smaller meiping painted with the guri design, excavated in Qin jiang county, Jiangxi province, not far from the Jizhou kiln site at Yonghezhen, and now in the Jiangxi Zhangzhou City Museum, is illustrated in Ye Peilan, Yuandai ciqi,Beijing, 1998, pl. 534, and also in Zhongguo taoci quanji, vol. 10, Shanghai, 2000, pl. 163. Compare also a meiping included in the exhibition Song Chinese Ceramics. 10th to 13th Century (Part 3), Eskenazi, London, 2007, cat. no. 20; and another sold in our New York room, 30th March 2006, lot 33

For further examples see four smaller vessels with painted guri scrolls published in Jan Wirgin, ‘Some Ceramic Wares from Chichou’, Bulletin of the Museum of Far Eastern Antiquities, no. 34, Stockholm, 1962, pl. 5a, a ewer in the Museum of Fine Arts, Boston; pl. 5b, a bowl in the City Art Gallery, Bristol; pl. 5c, a jar in the British Museum, London; and pl. 5d, a vase in China 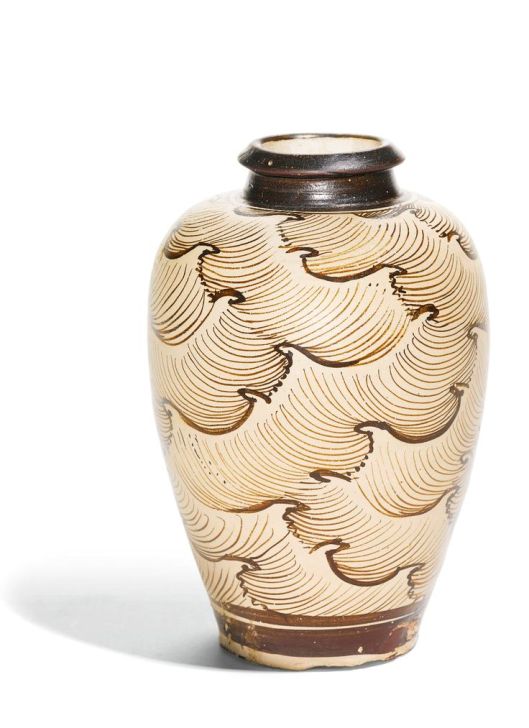 the elongated ovoid body with a short neck and lipped rim, set above rounded shoulders tapering to a narrow foot, painted with an overall design of large waves, with plain brown borders to the top of the shoulder and at the foot; 19cm., 7 1/2 in.

Notes: Vases decorated in this free painterly manner are amongst the finest examples of wares manufactured at the Jizhou kiln site at Yonghezhen near Ji’an in Jiangxi province, formerly known as Jizhou. Although Jizhou wares can be rough in their potting and are often sprinkled or splashed in an amber colour or use the sgraffiato technique for decoration, this vase is finely painted and is covered with a thin transparent gloss that makes it especially attractive.

A slightly larger meiping with the same stylized cresting wave pattern, from the collection of Eugene and Helen Bernat, was sold in our New York rooms, 7th November 1980, lot 119; and another is illustrated in Sekai toji zenshu, vol. 13,  Tokyo, 1981, col. pl. 288, in the Buffalo Museum of Natural Science. This decorative motif can also be found on ‘Jizhou’ bottle vases, for example see a pair excavated at Nanchang city in Jiangxi province, illustrated in Wenwu , 1975, no. 3, pl. 5, no. 5; and another sold in these rooms, 12th June 1990, lot 179