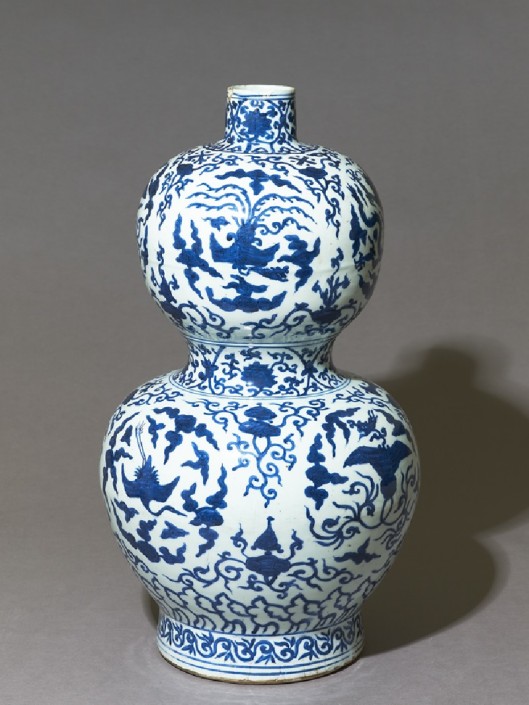 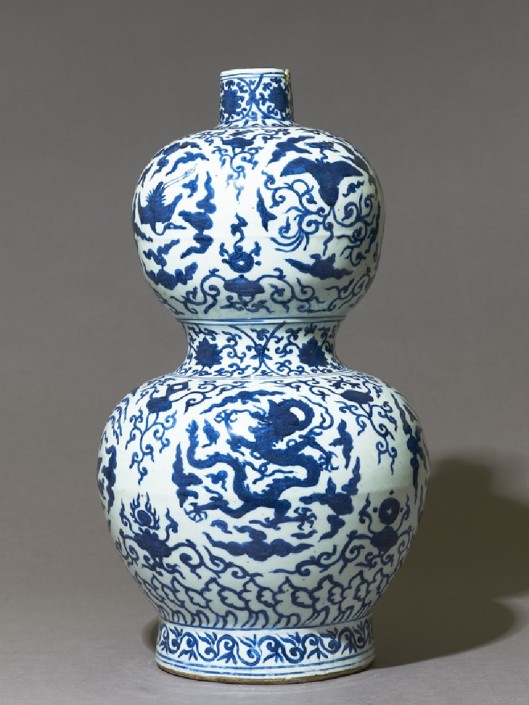 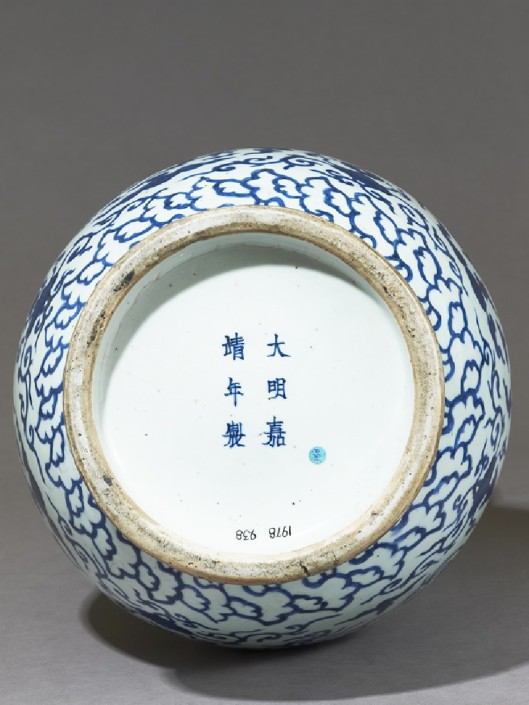 of rectangular section comprising five similarly carved panels: a removable front, three sides and a hinged cover, each depicting a foliate-shaped medallion enclosing a crane and a phoenix amidst wispy clouds centered on stylized shou character, the medallions set on a ground of flowering and fruiting branches of peach, prunus, lotus and peony, the cover with a rim carved with a band of prunus, pine and bamboo, the interior with six fitted drawers, arranged in three tiers, each fitted with lotus-form gilt copper escutcheons and pulls, the interior of the chest, drawers and flat recessed base lacquered brownish-black, the base incised with a gilt six-character reign mark  Quantité: 8 – 33cm., 13in.

Notes: Striking for the intricately carved decoration that extends over the entire broad surface, this box is notable for the perfectly composed and executed auspicious design. The Jiajing Emperor was obsessed with the magical practices performed by Daoist adepts in their quest for attaining fertility and immortality, thus imbuing all forms of art with Daoist themes. Amongst the various motifs found on this chest that allude to immortality are the lingzhi fungus, the shou character born from a ruyi-shaped cloud, the Three Friends of Winter and the double peach. The material itself was believed to have life-prolonging qualities, with lacquer vessels utilised for consuming food as early as the Song dynasty (960-1279).

A closely related Jiajing chest, similarly carved with confronting phoenix and crane, from the collection of Jean-Pierre Dubosc, was included in the exhibition Chinese Lacquer, Eskenazi, London, 1992, cat. no. 21. Chests of this form are also known carved on the central cartouche with various auspicious motifs; see one decorated with a group of cranes, in the Lee family collection, included in the exhibition Dragon and Phoenix. Chinese Lacquer Ware, The Museum of East Asian Art, Cologne, 1990, cat. no. 54, sold at Christie’s Hong Kong, 28th November 2012, lot 2102; another, sold at Christie’s London, 1stDecember 1997, lot 260; one decorated with dragons and cranes, in the Palace Museum, Beijing, illustrated in The Complete Collection of Treasures of the Palace Museum. Lacquer wares of the Yuan and Ming Dynasties, Shanghai, 2006, pl. 189, together with a chest carved with a twisting pine forming a shou character and a dragon, pl. 112; and another in the collection of Fritz Low-Beer, exhibited in Im Zeichen des Drachen, Museum fur Lackkunst, Munchen, 2006, cat. no. 71. Compare also rectangular lacquer chests with a detachable front panel, similarly carved on each side with auspicious motifs enclosed in a lobed cartouche; such as one in the Palace Museum, Beijing, included in The Complete Collection of Treasures of the Palace Museum, op. cit., pl. 136; and a pair, from the H.R.H. Prince Henry, Duke of Gloucester, H.R.H. Princess Alice, Duchess of Gloucester and the Lee family collections, sold at Christie’s London, 8th June 1987, lot 141, and again at Christie’s Hong Kong, 1st December 2009, lot 1829.

Rectangular lacquer chests have a long history in China, and in the Ming dynasty were used to hold seals on scholar’s desks or cosmetics and other objects for personal adornment on ladies’ dressing tables. A rectangular chest modelled with a removable and slightly domed cover, was recovered from the Tomb of Marquis Yi of Zeng, who lived circa AD 433, in Suixian, Leigudun, Hubei province. Chests of this form were also discovered in the Han dynasty (206 BC- AD 220) tomb of Lady Dai at Mawangdui, Hunan province, where they were used to hold clothes, food and cosmetics (see Sarah Handler, Austere Luminosity of Chinese Classical Furniture, Berkley, 2001, pp 241-242). Due to the laborious and time-consuming process of creating carved lacquer, large and exquisite pieces such as the present, were exclusively produced for the court. 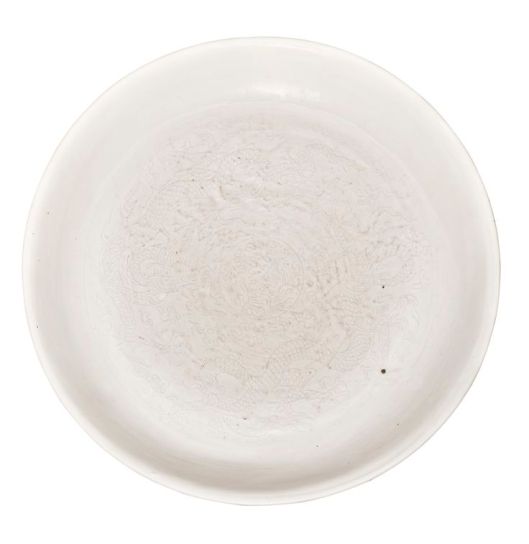 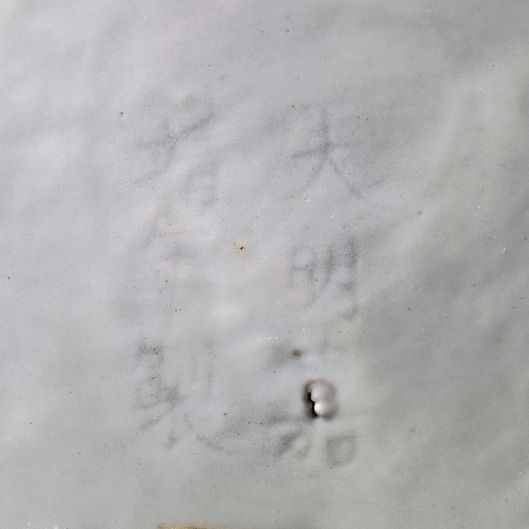 heavily potted, the rounded sides rising from a tapered foot to a flared rim, incised to the central interior with a pair of five-clawed dragons writhing amongst flames around a circular medallion enclosing tumultuous waves, the exterior similarly decorated with dragons striding amongst flames, covered overall in an opaque white glaze, inscribed to the base with a six-character reign mark within a double circle, Japanese wood box. Quantité: 2 – 39cm., 15 3/8 in. 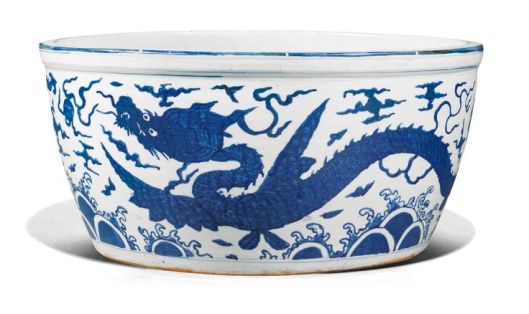 the deep tapering sides rising to an everted rim, boldly painted to the exterior with two winged dragons striding amongst cloud scrolls chasing flaming pearls above tumultuous waves, the rim inscribed with a horizontal six-character reign mark; 74.2cm., 29 ¼in.

Notes: The present fishbowl is remarkable for its lively scene of winged dragons flying above crested waves. Two closely related examples are known; one in the Art Gallery of New South Wales, Sydney, was included in the Museum’s exhibitionChinese Ceramics, Sydney, 1965, cat. no. 85; and the other was sold in these rooms, 31st May 1989, lot 82. The difficulties encountered by the Jingdezhen potters in manufacturing such large vessels are mentioned in the Jingdezhen Taolu (An Account of Ceramic Production at Jingdezhen) which records that after firing a large number of these vessels  ‘there were also many that had been ruined, crushed flat, spoilt or squashed’ (see The Fame of Flame. Imperial Wares of the Jiajing and Wanli Periods, Art Gallery, The Chinese University of Hong Kong, Hong Kong, 2009, p. 120).

For the Xuande prototype see one painted with winged dragons above waves, recovered from the Xuande strata of the waste heaps of the Imperial kiln at Jingdezhen, included in the exhibition Imperial Porcelain of the Yongle and Xuande Periods Excavated from the Site of the Ming Imperial Factory at Jingdezhen, The Urban Council, Hong Kong, 1989, cat. no. 92.

Among zacai wares, this jar uses a particularly complex decorative technique. After first firing as porcelain, the entire surface was covered with yellow enamel and the jar was fired again. Then the design was applied and the piece fired a third time. In this case, the outline and details of the dragon design were painted in brown pigment, and the background filled in with red enamel. Due to the yellow base, the red color is even more vivid than usual. The design covering the jar’s surface combines with this vivid color for a rich effect. This jar is a good example of the mood of the Jiajing period, when colorful wares were popular.

This bottle is covered with deeply coloured enamels, leaving no white space in the style known as zacai. The vessel is first fired as porcelain, after which the baoxiang-hua pattern is applied in red enamel and the background filled in with green enamel, and the pot is fired for the second time. Recent research has determined that the zacai technique had already been developed in the Yongle period. It was particularly popular during the Jiajing period, and there are a variety of examples remaining from this time. The gourd-shaped bottle from was also produced in large quantities during this period.