The shallow bowl is decorated on the exterior with a mountainous river landscape scene including the Eight Daoist Immortals with their attributes beneath swirling clouds, and the Star God Shoulao seated beside a deer and a smoldering censer with an attendant nearby. The interior is decorated with a small landscape medallion. The base bears a large four-character mark reading yu tang jia qi (‘fine vessel for the jade hall’) within a double circle. 14 in. (35.3 cm.) diam. Lot 3559

Notes: A wucai bowl, decorated with the same subject and of similar proportions, also bearing the yu tang jia qi mark, is in the Butler Family Collection and is illustrated by Michael Butler, Julia B. Curtis and Stephen Little in Shunzhi Porcelain: Treasures from an Unknown Reign, 1644-1661, Alexandria, VA, 2002, pp. 222-223, no. 74.

'Immortals' bowl, Wanli six-character mark and of the period, wucai 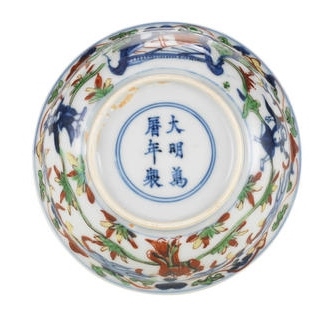 With shallow curved sides rising to a slightly everted rim from a short circular foot, painted in blue and enamelled on the exterior with three immortals standing near a cave entrance amidst a lush landscape scene, the interior featuring a central medallion of a scrolling dragon-fish, yulong, in flight amidst lightning clouds, the base with a six-character kaishumark. 11.2cm (4 3/8in) diam.

Notes: The cavetto of the wucai bowl is further decorated with the rare motif of Daoist Immortals. Such decorative element was originally inspired by the Jiajing emperor’s fascination with Daoism as a means to longevity.

The dragon fish motif as depicted towards the interior within double circles is extremely rare. The carp or liyutransforming into a dragon long is associated with the passing of civil service examinations, hence forming the punyutiao longmen. According to traditional folklore, carp swim upstream in the Yellow River at Hunan towards the Dragon Gate waterfall at Longmen. It is said that the first carp which successfully surpasses the rapids will transform into a dragon fish yulong. Such legend has led to the common saying that, ‘a student facing his examinations is like a carp attempting to leap the Dragon Gate’, which bears the metaphor for a poor scholar who passes the civil service examinations and becomes a high official.

Compare a similar shaped but smaller (9.6cm diam.) Wanli wucai bowls featuring instead a centralised dragon medallion and with figures carrying offerings in the Qing Court Collection, illustrated in Porcelain in Polychrome and Contrasting Colour. The Complete Treasures of the Palace Museum, Shanghai, 1999, p.56, no.52.