Two green bean pods, one open, with a bat and Ruyi on the reverse. White gold loop with diamond. 2″h.

Columbus, OH – Garth’s Auctioneers & Appraisers has amassed a quality auction with over 900 lots of fine and decorative antiques from all over the world. With an Asian Arts session kicking off the two days of selling on the morning of January 29, followed by Continental later that day and Country Americana on Friday, January 30, the auction is sure to offer something for every genre of collecting. “There has been strong interest in auctions that have a wide variety of choice items,” comments company CEO, Jeff Jeffers. “Some collectors are highly focused, but most people appreciate an opportunity to see great objects – even if they fall into a slightly different genre.”

Garth’s has posted what may be the best Asian offering by the firm in several years. “That portion of the auction came together nicely,” continues Jeffers. “We focused on several longterm relationships who were just ready to sell.” A number of lots hold solid potential, including a rare white nephrite archaic covered vase with low relief carving of dragons, birds and masks. Estimated at $100,000 – $150,000, the vase exemplifies the highest quality craftsmanship and material available in the 18th and early 19th Centuries.

Low relief carving consisting of eight leaves with masks on the body, masks on the neck and dragons on the hollowed base. Two bird handles with rings. The lid has a floral finial and carved masks. Natural brown line along the base. 8.25″h.

The property from a Gentleman.

A hanging lidded vase carved from white jadeite with lavender and apple green accents includes archaic symbols with a well-developed beast on the lid and lingzhi finial and it’s original and beautifully carved stand (Est. $60,000 – $80,000). With strong provenance from a longtime client of Garth’s, the two items are expected to perform well. Two jade censers provide a balanced opportunity for buyers in lower and higher price ranges: a beautiful greenish jade covered censer with dragon head handles and animal mask feet is estimated at $12,000 – $18,000 and a pierce-carved white jade censer with elaborate floral carving is estimated at $4,500- $6,500. 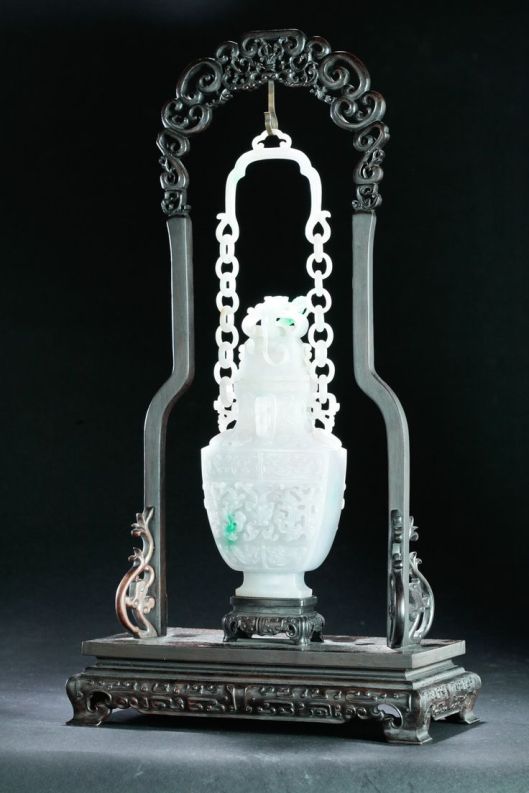 Rectangular flattened form with relief carved archaic motifs. Arched hanger is attached with a chain as well as the lid which has a beast and lingzhi finial. White jadeite with lavender and apple green accents. Well-carved archaic wood stand. 13.5″h. overall.

From: A private collcetor in France.

Natural imperfections in the jade show as opaque white, largest areas along edge of lid rim and foot, but all are polished smooth and have to seams. Pinpoint nick on top rim of base. sw 7/21 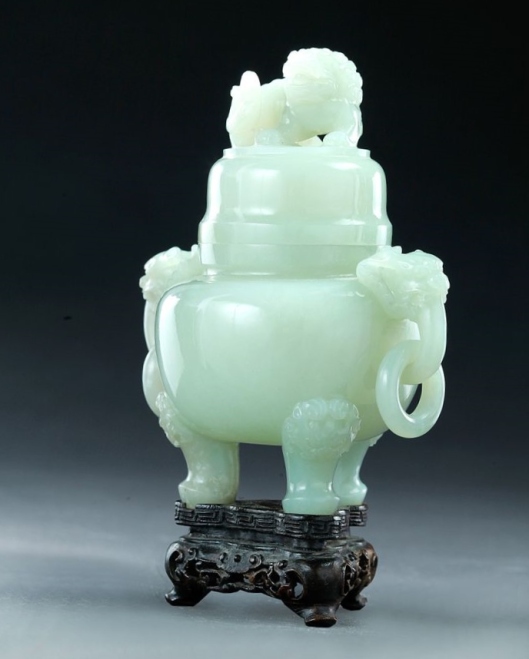 The base has dragon head handles with rings and three animal mask feet. Beast finial has a small bruise. 5″h. With a wood stand.

From a English private collection.

Finely carved replicas of Spanish coins featuring King Carolus IV with the date 1806. Portrait on one side of the ruler in Roman dress and the Spanish coat of arms on the other. 2″d. In a box labeled « Great United Kingdom Jade ». DEI. GRAIIA. 1806 CAROIUS. IIII. and HISPAN. ET IND.REX.M.8R.T.H on each coin. 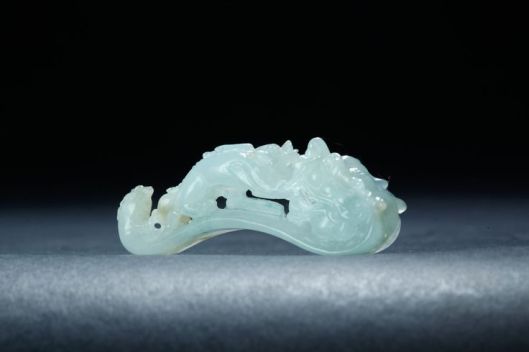 Depicting a carved dragon with a baby dragon. 3″l. 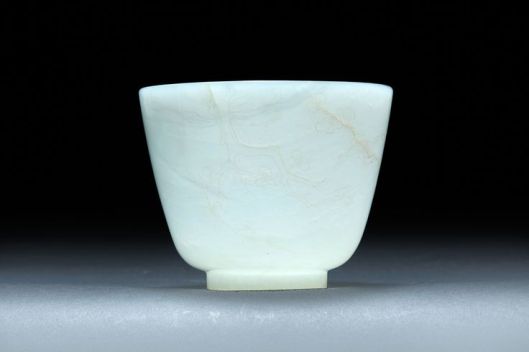 Translucent vessel with steep walls and thin brown natural cracks scattered around it. The exterior has a faint incised branch with plum flowers and peony flowers on the opposite side. 2.25″h.

Other highlights of the Asian session include an altar coffer constructed of the prized huanghuali wood. “We competed with two firms in New York and San Francisco for the coffer,” says Jeffers. “At the end of the day, the seller wanted simplicity and transparency more than anything. She knows the table will bring what it’s worth – on the coast or in the Midwest.” Estimated at $20,000 – $40,000, the coffer has terrific provenance – having been gifted to the late Honorable Richard Butrick, who served as a diplomat to China during the early 20th Century. 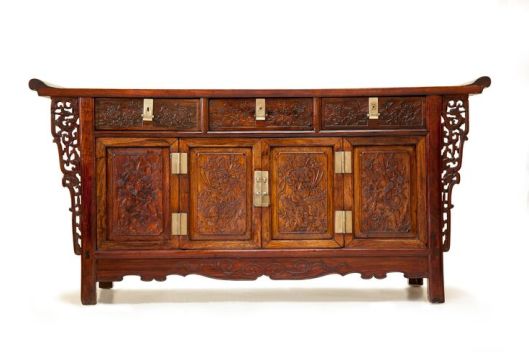 From the collection of the late Honorable Richard P. Butrick, a career diplomat who spent twenty years in China during the early 20th century.

If the buying trends continue, bronze Buddha may be big sellers in this auction. A 19th Century gilt bronze figure of Shakyamuni is estimated to fetch $8,000 – $12,000; while an earlier Qing version of the same figure – with elaborate jewelry and incised characters is estimated at $15,000 – $20,000. 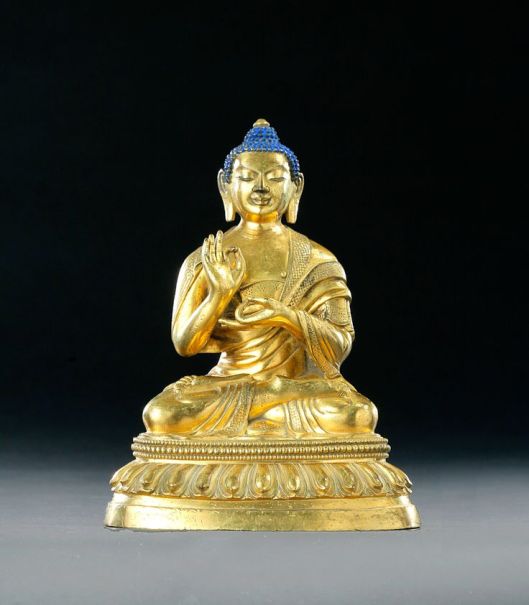 Seated on a lotus base with right hand raised and left hand posed. Clad in a diaphanous sanghati with the folds elegantly piled beneath the ankles, the face with elongated eyes flanked by pendulous earlobes and surmounted by a prominent ushnisha. 7.5″h. 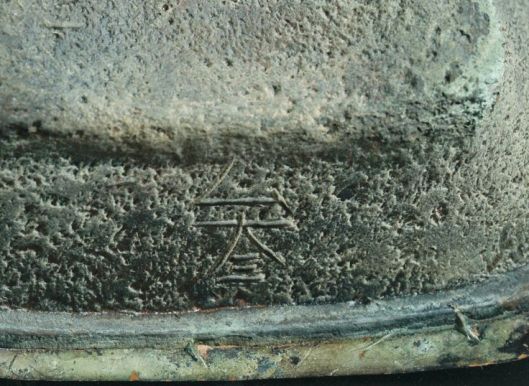 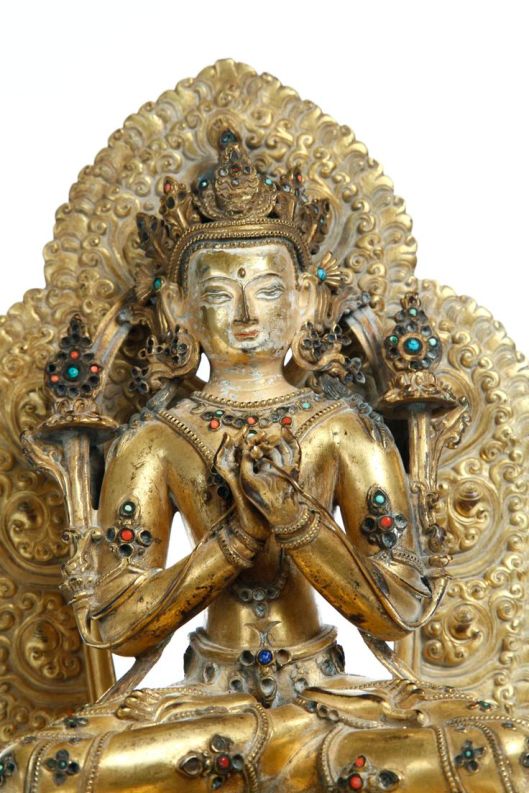 Seated figure on a lotus throne with figural base and flaming crest. Incised script on the back and a bottom plate with inscribed floral design. Traces of original blue paint and some turquoise and coral insets remain. 13.5″h

Minor surface wear, original blue paint on hair is worn. Most of the insets are missing, approximately 40 remain. Original red paint on the back of the crest. Crest is a little loose on the base. sw 7/21 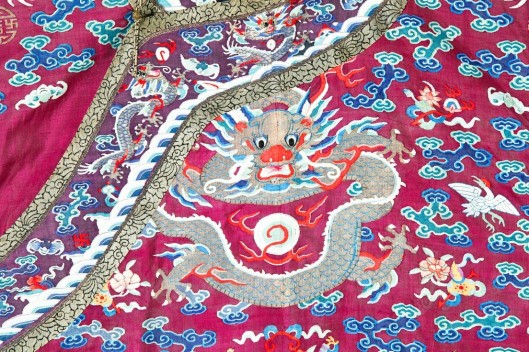 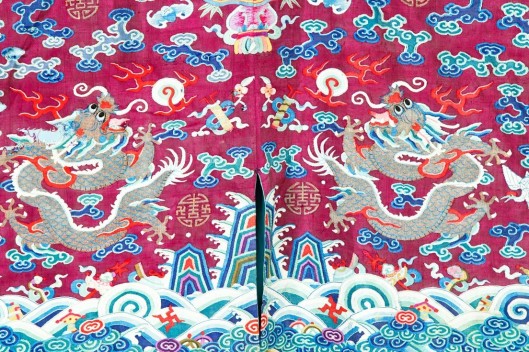 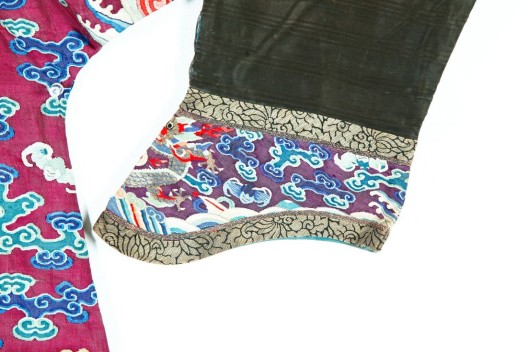 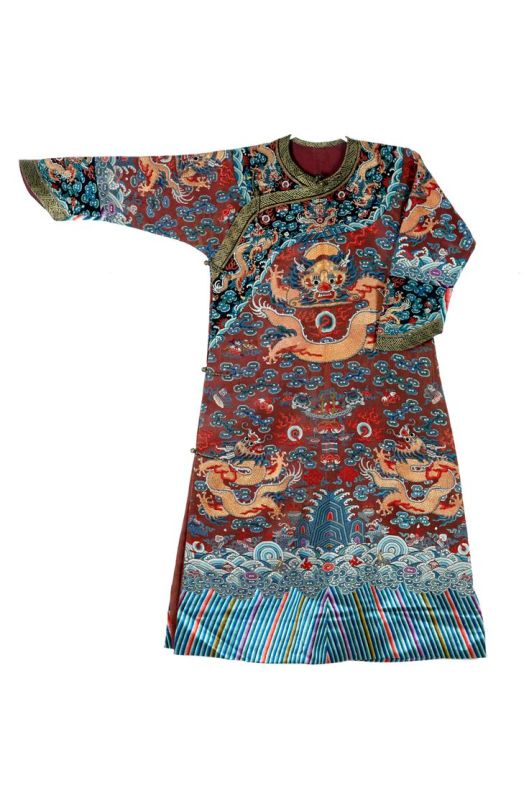 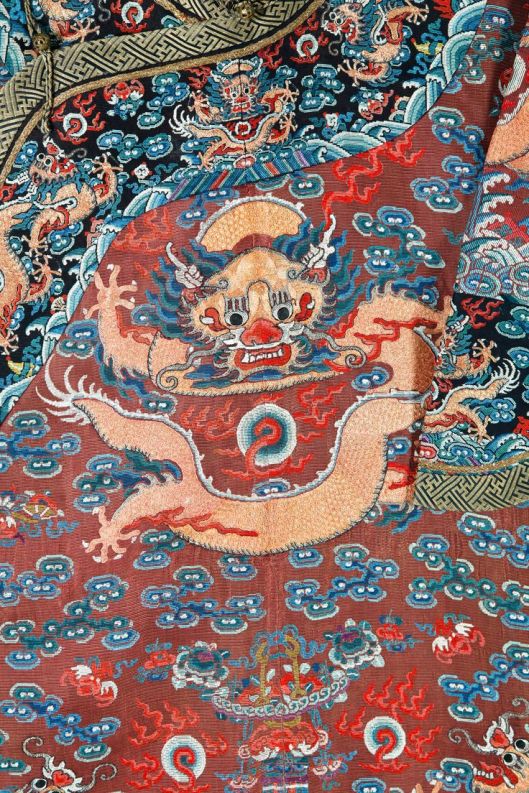 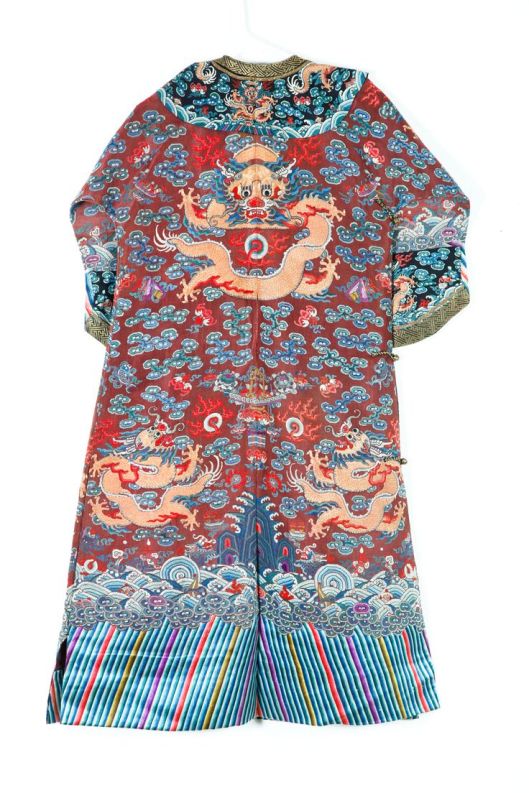 A large group of snuffs came from a single owner on the West Coast, including a Su Zhou school black and white bottle with figural carving (Est. $3,000 – $4,000), a lovely white jade cicada retaining fine natural brown coloring along the details of the carving (Est. $8,000 – $12,000), and several more examples in jade, agate, crystal and glass. 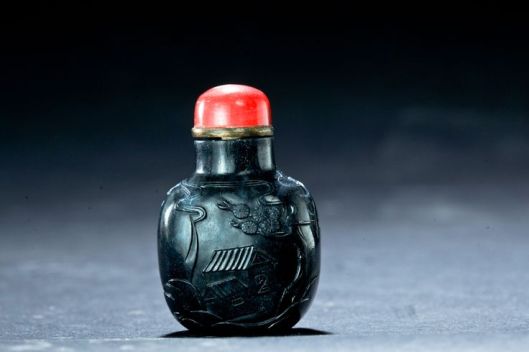 Well carved with a man on horseback and an attendant under a rocky landscape with flowering plum trees. Reverse has a scene of two cottages under a pine tree with clouds. Flattened base. Fitted with a coral and gilt-rimmed stopper. 3″h. 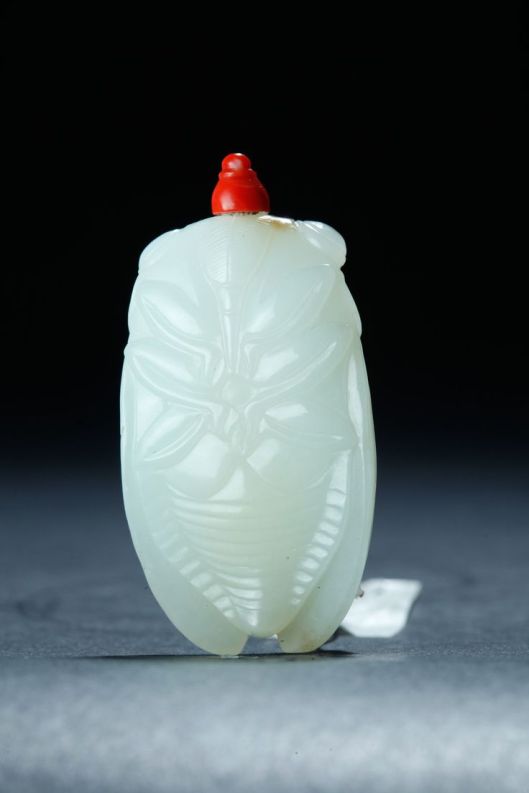 Finely carved details on the whole with a lovely natural brown color along the top. The mouth holds a coral stopper. 2.5″l.

Provenance: from a private California collection

The choice cloisonne collection starts the session: a large moon flask with a beautiful wooded landscape and animals has an impressive mark on the base and may sell for $8,000 – $12,000; and a 19th Century tripod censer with Buddhist and lotus blossom patterns and a four character mark on the base should fetch $6,000 – $8,000.

Gilt rim, conforming foot and dragon handles applied at neck. Blue ground with vining lotus, bats and « Gi » frame two reserves on each side of the body. One with sheep in a wooded landscape with pine trees, bamboo and prunus, the other with deer, cranes, waterfall and clouds. Six character « Da Qing Qian Long Nian Zhi » mark on base. Minor loss. 15″h.

A private collection from California.

A private collection from California.

Garth’s catalogs are available for purchase by mail or may be browsed for free online at garths.com. Garth’s main gallery is located at 2960 Stratford Road, Delaware, Ohio. Preview hours will be held January 23rd thru the 30th, and by appointment. Garth’s is accepting quality items for the 2015 auction year. For further information regarding how to sell at Garth’s, or for a valuation of your item(s), please contact sell@garths.com or call 740-362-4771.