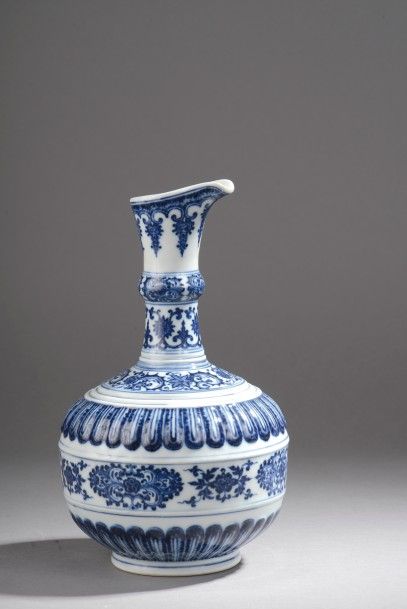 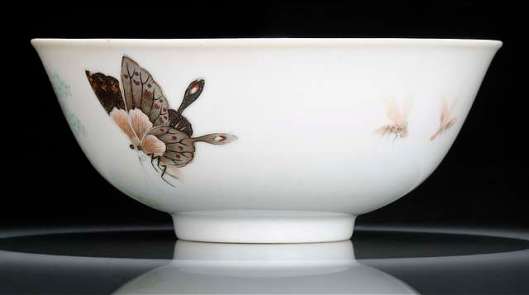 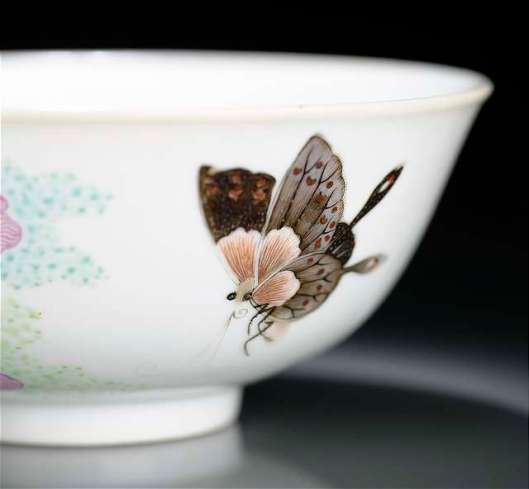 BOSTON, MASS.- A monumental Fencai Imperial Qing Dynasty vase auctioned for $24.7 million at Skinner last night, setting a record as the top grossing lot ever sold in New England, and topping all sales of Qing Dynasty vases in the U.S. The Skinner Asian Works of Art auction coincides with Asia Week, and this vase has surpassed all other objects sold during the event to date.

An intensely focused and enthusiastic crowd packed the auction room, and most rose to their feet as the vase soared past the $10 million mark. After spirited bidding from multiple bidders present in the room and participating by phone, the hammer fell to a round of applause.

According to Judith Dowling, Director of Asian Works of Art at Skinner, Inc., “The vase is a tour-de-force of ceramic techniques, and it is believed that the Emperor ordered it made.” It was fired at the Jingdezhen kilns under the direction of the famous superintendent Tang Ying (1682-1750). The National Palace Museum in Beijing, China is home to the only other known example of the same size and decoration.

Prior to the auction, previews in New York and Boston generated tremendous excitement. Interested collectors arrived from around the world to view the historically significant piece in person.

Karen Keane, CEO of Skinner, Inc. noted, “Boston is a vibrant and essential marketplace for Asian works of art and we at Skinner were honored to have the opportunity to be stewards of such an important and beautiful work of art. The auction was a thrill for all of us who were involved.”

BOSTON, MASS.- Skinner will hold an Asian Works of Art auction on September 17, 2014 in Boston, focusing on rare and important Chinese art, and featuring a monumental, Fencai, Imperial Qianlong period vase. In addition to the auction preview in Boston from September 14th through 17th, collectors are welcome to a preview on September 12th from noon to 7PM during the New York fall Asia Week.

Monumental Fencai Vase
Formerly in the collection of Ton-ying and Company, the Imperial Qianlong period vase (Lot 96) is a tour-de-force of ceramic techniques employed by the Jingdezhen imperial potters.

Provenance: Formerly in the collection of Ton-Ying & Company.

Judith Dowling, Director of Asian Works of Art, states: « This important vase was likely made for the Emperor so he could appreciate the technical achievements illustrated in the vase. It required multiple firings of the fifteen different glazes and enamels that resulted in the exquisite floral and landscape designs. » A vase of similar size and decoration is currently in the collection of the National Palace Museum in Beijing, China.

The auction opens with a cloisonné snuff bottle from the Qing dynasty (Lot 1, Estimate $3,000 to $5,000), the first of a group of extremely fine 18th century Chinese snuff bottles. A private New England collector acquired the jade, cloisonné, agate, amber, porcelain, and early glass snuff bottles over a period of thirty years.

elongated pear-shape with slightly flattened body, round mouth rim, and short oviform foot, decorated with a lion’s head with a ring in its mouth on both shoulders, each side of the body decorated with a pair of shishi lions in various colors and tones of enamels on a white ground filled with ruyi scrolls in light blue, a pendant lappet with ruyi mushroom and lotus flower design to the neck and an upright lotus leaf lappet near the foot, the domed cover decorated with a flowerhead in the center, four-character Qianlong mark incised to base, ht. 3 3/8 in. chipped to mouth rim, normal age wear.

A beautiful mirror black vase (Lot 113, Estimate $800 to $1,000) highlights a group of fine ceramics and other objects sold to benefit the acquisition fund of the Hood Museum of Art, Dartmouth College, Hanover, New Hampshire.

flattened pear-shape with straight neck and lipped rim, resting on a splayed foot, unglazed foot ring, with a double ring in underglaze blue to the recessed white-glazed base, ht. 7 1/8 in.

rectangular top above a narrow straight waist with long horizontal openings, placed on a wider frame with carved bands of lotus petal lappets around a rounded top, with bats amongst palmette scrolls bordering the straight apron and legs with hoof feet, the apron decorated with jade carvings of lotus flowers alternating with various auspicious symbols within a reticulated ground of geometric honeycomb patterns in a rectangular reserve defined with a band of meander design, metal brackets to the four joints of the frame and leg, wood openwork brackets to eight corners of legs and apron, 34 3/4 x 50 3/8 x 26 1/4 in. minor age cracks to wood, refinished top, one of wood openwork brackets detached.

rectangular form with flared sides and gilt rim, resting on four short bracket animal-mask feet, each side depicting numerous mythical animals amongst waves in fine low relief within a gilt border, two gilt mythical animal heads with loose rings to the narrow sides, the domed rectangular cover decorated with openwork dragons and a knob in the shape of a downturned rectangular lotus throne, with a sheng character, meaning « holy » in the gilt interior, six-character Xunade mark on base, 6 3/4 x 6 5/8 x 4 7/8 in. minor chips along edges, much loss of gilt to borders and rims, patina to some area.

Provenance: Purchased from Richard B. Faber.

both sitting upright in a chair, dressed in formal robes, with their feet on a footrest, the man holding a fan in his right hand and a rosary in his left, his robe with a rank badge with auspicious symbols, a « ri » (sun) character, a left-facing bird, the woman with her hands and feet hidden under her robe, wearing a headdress with openwork phoenixes, her robe with a rank badge with auspicious symbols, a « yue » (moon) character, and a right-facing bird, ink, color, and gold on paper, framed and glazed, painting 62 1/2 x 34 1/2 in.; in good condition with some buckling, creases, loss of colors, traces of repairs.

Provenance: Purchased at Charlotte Horstmann in 1987.

Important Collection to be Offered in November

Nearly three decades ago, an art collector tucked away a world-class collection of Japanese prints. This fall, the public will finally have a chance to see these works when they come up for auction at a two-day Asian Works of Art Auction on November 22 and 23, 2014. This auction will feature approximately 130 prints by renowned Japanese painter and printmaker Kawase Hasui (1883-1957) from the Collection of Irwin Pachter. Mr. Pachter summed up his collection in 1986 when he said, “It’s going to leave you singing when you get through this. There are so many colors.”

The two-day November auction will also feature a collection of works on paper by Toko Shinoda along with other Chinese, Japanese, and Korean works of art.