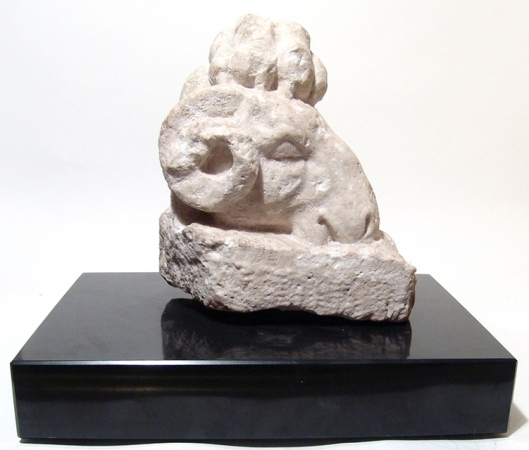 MONTROSE, CA.- In 2003, after years of producing and writing ancient-history documentaries for History Channel, Discovery Channel and other respected networks, Gabriel Vandervort took his considerable knowledge and love of antiquities down a different path. He founded Ancient Resource – a small specialty business that evolved into a big business with a staunchly supportive clientele. The final link that made Ancient Resource a globally recognized brand in its space was the establishment of an auction division, which has grown to a position of respect and acknowledged integrity in the marketplace.

Ancient Resource painstakingly authenticates and guarantees every item it sells, and that includes the 400 superior-quality lots to be offered in its December 7th Fine Ancient Artifacts Auction. Methods of bidding for the sale include phone, absentee, and live via the Internet through LiveAuctioneers or Invaluable.

As is the tradition with Ancient Resource auction events, the first 20 to 25 lots contain pieces from various cultures, some at a price point suitable for beginners. They are followed by logically organized groupings of premier artifacts from specific cultures, chosen to please even the most discerning collector.

Lot 97, a marble Janiform bust of the Roman twin gods Hypnos and Thanatos, is particularly rare because there are so few, if any, other known portrait depictions of Thanatos as an adult. “A Janiform sculpture of the two brothers together puts this piece in a league of its own,” said Vandervort. The presale estimate is $40,000-$50,000. 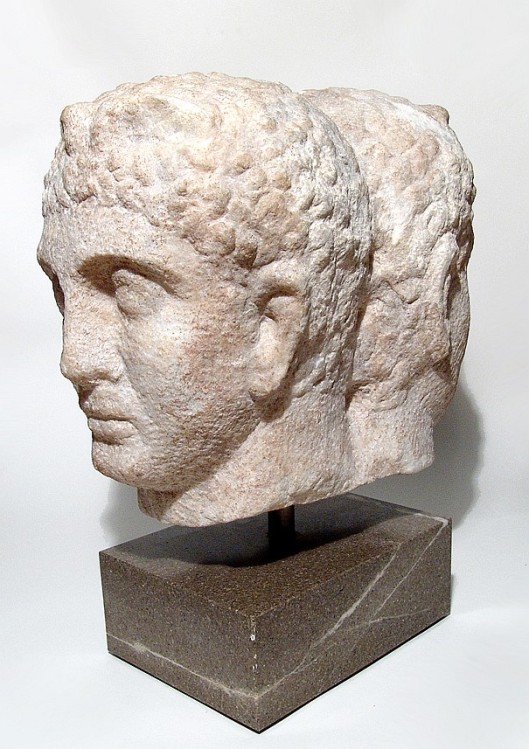 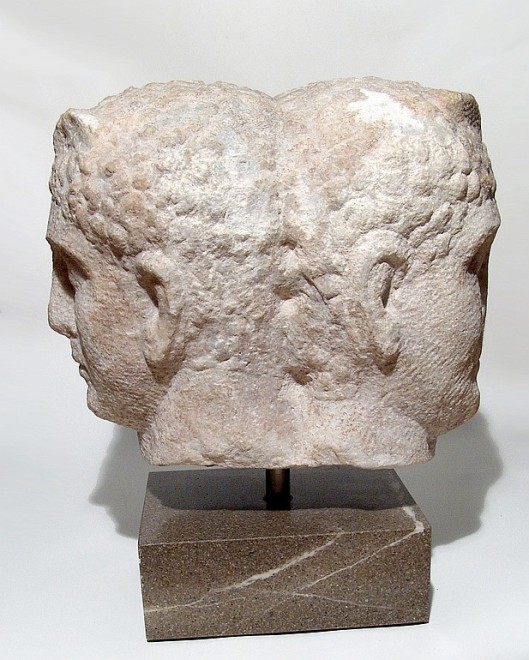 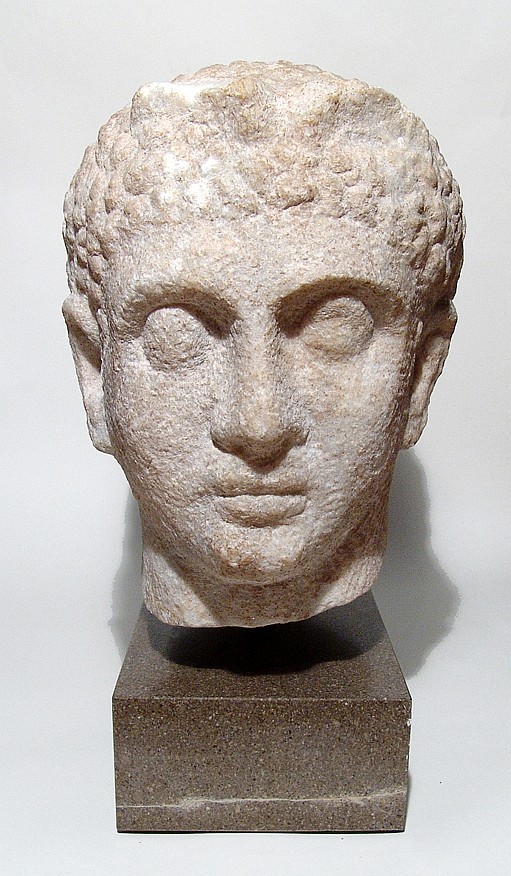 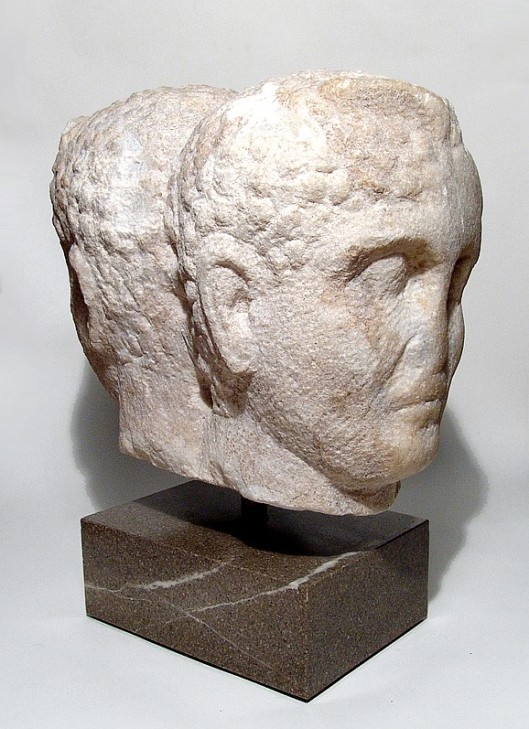 rendered in nice style, both male human heads with short, tightly curled locks of hair, their features tranquil, peaceful. This piece is an extremely rare marble Janiform bust of the twin gods Hypnos and Thanatos. While there are a few known portrait depictions of Hypnos there are virtually none of Thanatos as an adult. Janiform portraits depicting both are rarer still. 11 ½ in x 8 ½ in x 14 in (19.2 x 21.9 x 35.4 cm). With heavy stone base.

Thanatos was a Roman god of death. He was regarded as merciless and was hated by and hateful towards mortals and the deathless gods. Hypnos was a Roman god of sleep, residing in Erebos, the land of eternal darkness beyond the gates of the rising sun. From there he rose into the sky each night in the train of his mother Nyx (night). Ex German private collection, purchased in the late 1970’s.

Mosaics were a common feature in private homes and public buildings throughout the Roman Empire, from Africa to Antioch. “Not only are Roman mosaics of the 3rd to 5th century BC beautiful works of art, they also document the styles, weapons, food, flora and fauna of the period. Historically, they provide an accurate snapshot of what life was like,” said Vandervort. The December 7 sale includes Lot 102, a 33¼ by 21½ inch Roman mosaic depicting a woman in a toga, reclining on a chaise. One of the finer examples of its type, it is entered in the auction with a $25,000-$35,000 estimate.

resting on a ‘kline’ or daybed, a form of couch used at gatherings, a canopy supported by four columns overhead, opus sectile flooring below, a mask mounted on the fringe of the canopy is to her right. The mosaic is preserved within a rectangular frame with nice earthen tones ranging from yellow to green and brown to red, black or dark brown for the details. Entire framed mosaic measures 33 ¼ in x 21 ½ in (84.9 x 54.5 cm). 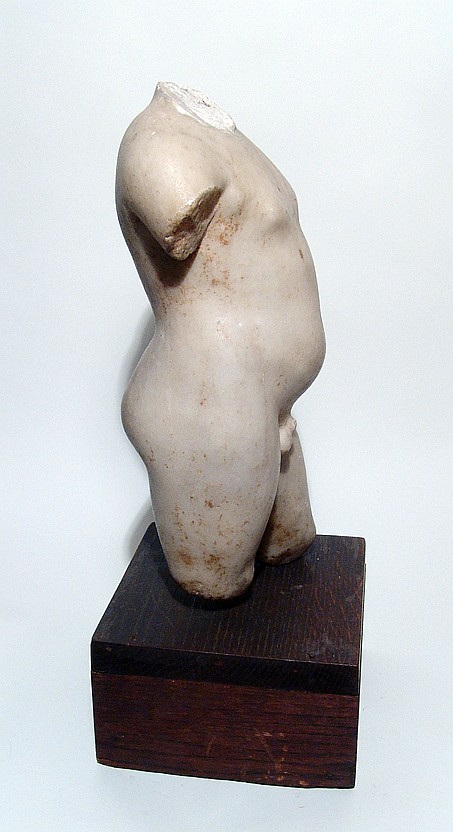 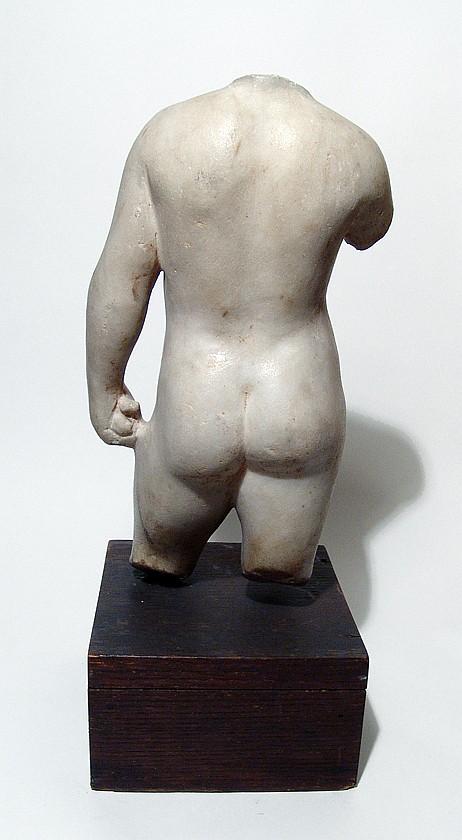 naturalistically carved with rather plump features. The surface are well-preserved with mineral deposits throughout. H: 12 ¼ in (31.2cm). Mounted on a custom wood base.

The selection is rich with Ancient Egyptian rarities, including Lot 45A, a 10-inch cast-bronze statue of Osiris, god of the afterlife. In nuanced colors ranging from chocolate brown to ivy green, the well-sculpted and chased figure retains a previous (early 1900s) sales tag from Blanchard’s Egyptian Museum in Cairo. Estimate: $10,000-$15,000.

featuring hieroglyphic characters carved in low relief, and owl and reed and part of another bird above. The relief is nicely carved and mounted on a custom lucite stand with inscribed brass information plaque. 10 2/5 in x 6 in (26.5 x 15.2 cm). 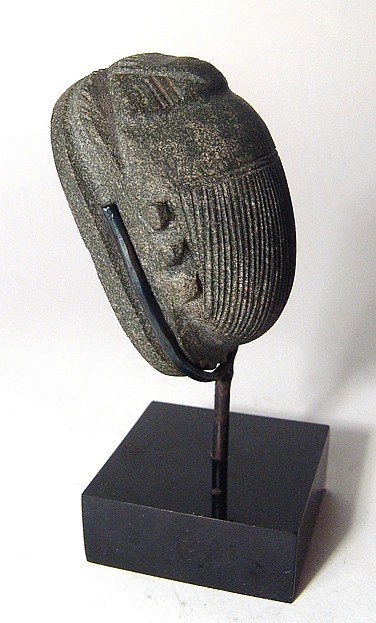 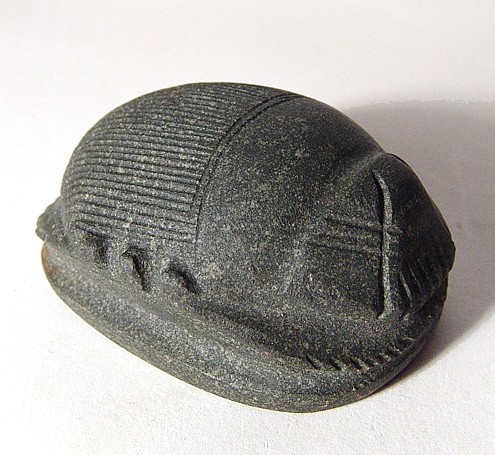 The Ancient Greek section is led by Lot 97A, a stunning marble sfumato of Aphrodite from the island of Rhodes. The 18-inch-tall nude dates to the Late Hellenistic Period (circa 100-100 BC) and displays pleasing facial features, hair arranged in a coiled bun at the nape of the neck, and a body described in the auction catalog as “almost Rubenesque.” A marvelous work of Ancient Roman sculpture with provenance from a New York City private collection, Aphrodite is the anticipated top lot of the sale with an estimate of $150,000-$200,000.

nude, with head turned to the left, her hair styles back in waves to a coiled bun at the nape of her neck. The features are nicely carved with pleasing style, the surfaces of the marble extremely well preserved. H: 18 in (45.6 cm). Commencing around 150 BC the center of the production of images of Aphrodite shifted from Pergamon to Rhodes. With this shift a noticeable change in artistic styling can be identified, noticeably, the use of a lower quality marble with an overall sfumato finish. Rhodian Aphrodite from this period share the characteristics of a Baroque, almost Rubenesque, body with a head that is generally weaker in modeling, smaller in size, and marked inconsistency with the rest of the body. Our offering is one of the finest examples of its type. The features of Aphrodite are reminiscent of soft plump white skin. As it typical in the Late Hellenistic period much of the divine presence falls away with the absence of drapery and she can be viewed simply as a beautiful woman. The carving, the pose and the overall appeal indicate the highest level of technical expertise. Mounted on a custom stone base. A marvelous work of ancient Roman sculpture!

Lot 183 is an Attic red-figured amphora with painting attributed to the Ethiop painter, who worked in the Early Free Style period (475-450 BC). The obverse depicts a man in a highly detailed robe, with a walking stick, while the reverse shows a warrior with a shield over one shoulder and a lance or javelin over the other. Estimate: $20,000-$25,000. 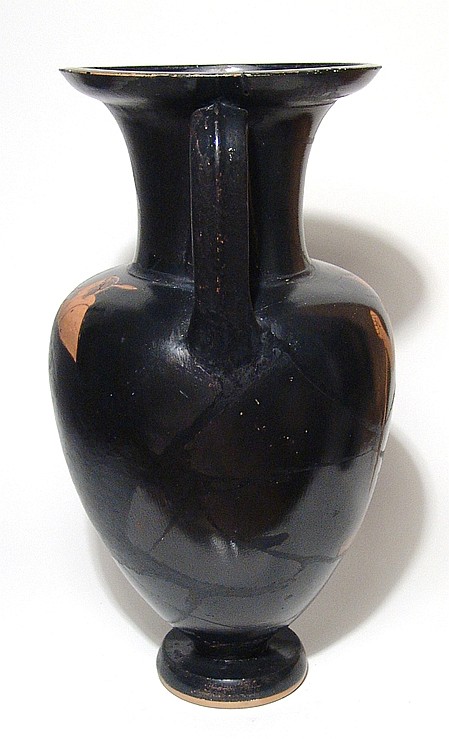 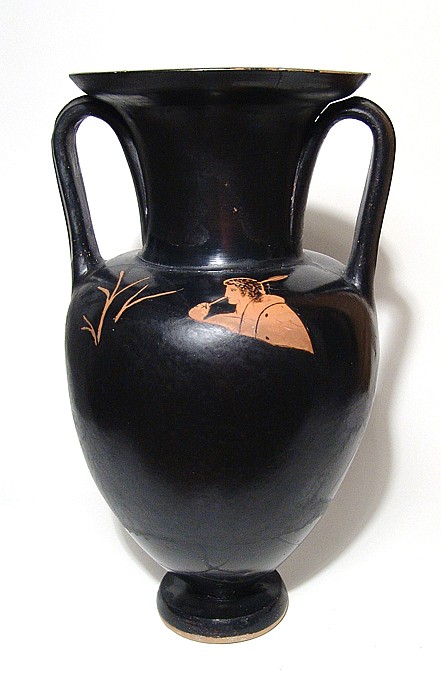 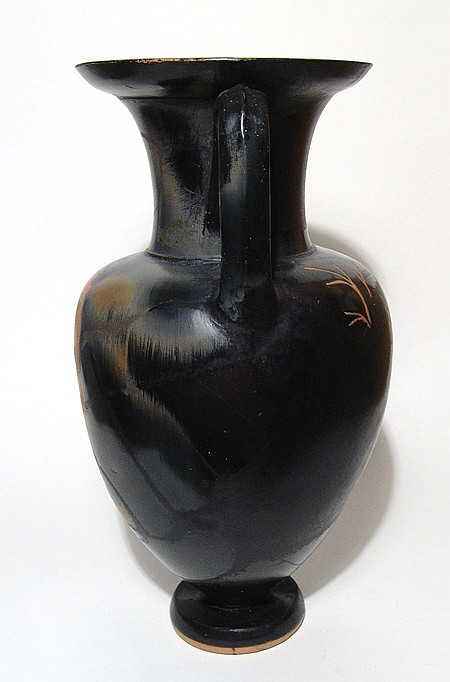 depicting robed man with walking stick, Maeander pattern below, and the upper part of warrior on reverse. H: 13 ¼ in (33.7cm). The Nolan type (from Nola, Italy), was the most popular style of amphora in the red figure period. The painting of this vessel is attributed to the Ethiop painter who worked in the Early Free Style period (475-450 BC).

Lot 182, a large (16 2/5in tall) and impressive Etrusco-Corinthian black-figure olpe dates to the early 6th century BC. Its body is decorated with four registers of lions, bulls, ibex, owls and other birds separated by rosettes and floral elements. Formerly in the possession of a well-known Italian private collector beginning in the late 1940s, this important piece could reach $40,000-$50,000 at auction.

the body decorated with four registers of Lions, Bulls, Ibex, owls and other birds, all separated with rosettes and floral elements, all painted in dark brown and reddish-brown slip with incised accent, the registers themselves separated with bands of the same color, a molded ring at the join of the neck to the body and two rotellae on the wide rim, the ridged handle attached to the rim between them from the shoulder. The upper portion of the vessel is slipped in dark brown save for a partial band on the rim left bare, a red band within and white dots on the rotellae. A very large and most impressive example! H: 16 2/5 in (41.7cm).

Ex Collection of a well-known Italian private collector beginning in the late 1940’s.

Although the vessel known as a rhyton is of Greek origin, many other cultures adopted the form, including the Almash, who occupied much of what is now northern Iran. Lot 153 is an Almash rhyton in the form of a stag. “We hesitate to use the term ‘museum worthy,’ but this stag is in a remarkable state of preservation and deserves that description,” said Vandervort. Its pre-auction estimate is $10,000-$15,000. 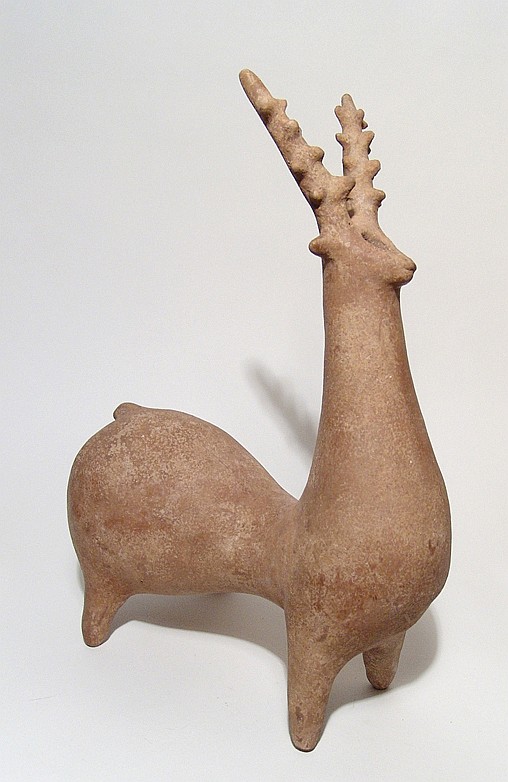 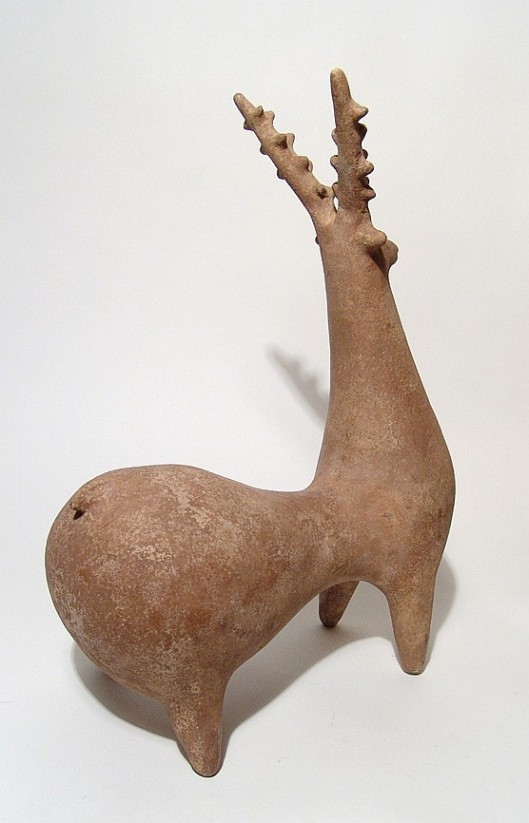 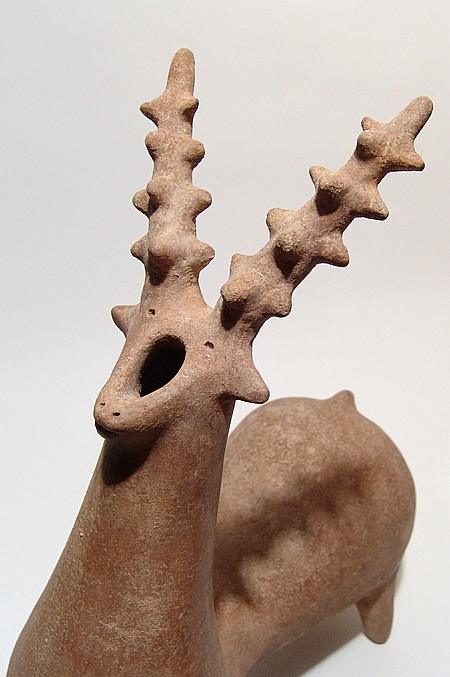 the hollow vessel of elegant style stands on four tapered legs, with a short spout in the form of the muzzle, indicated eyes, nostrils and pointed ears, antlers or horns well-defined, short tail and genitalia below. H: 13 2/5 in (34cm), L: 10 in (25.6cm). Light earthen and mineral deposits. A beautiful example of an iconic type of Central Asian ceramic vessel!

A sizable selection of fine Pre-Columbian art includes Lot 279, a large Amalito stone mask from Argentina. Dating to the 14th century, its well-preserved visage displays desirable evidence of mineral deposits gained over several centuries. With provenance that includes a previous Sotheby’s sale, it is estimated at $4,000-$6,000. 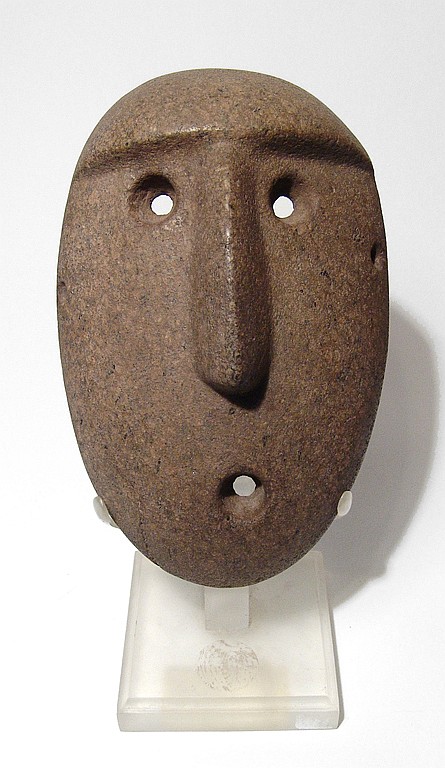 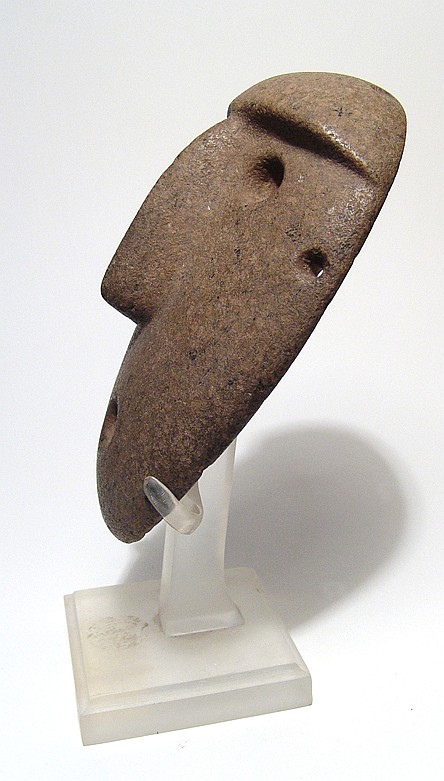 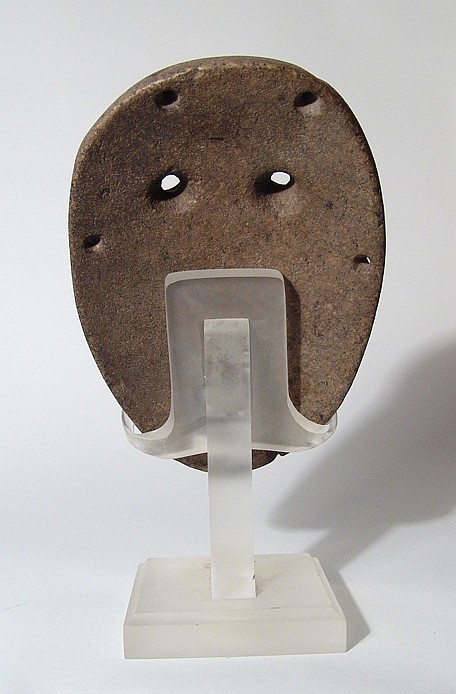 oval in shape with concave backside, the brow quite pronounced with large angular nose, round eyes and mouth. 7 ½ in x 4 ¾ in (19.1 x 12.3 cm). Well-preserved with good mineral deposits and mounted on a custom lucite base.

Bidders can feel completely confident about the antiquities offered in the sale, said Vandervort. “I turn down 95 percent of what’s offered to me because I’m not convinced about the items’ authenticity or provenance. We represent only authentic pieces that are legal to sell and which were obtained from carefully screened consignors.”

For additional information about any item in Ancient Resource’s December 7 auction, contact Gabriel Vandervort by calling 805-427-4432 or 818-425-9633; or email ancientresourceauctions@yahoo.com. Visit www.AncientResourceAuctions.com. View the online auction catalog and sign up to bid absentee or live via the Internet on auction day at www.LiveAuctioneers.com or www.Invaluable.com.