Notes: Superfluous details have been kept to a minimum in this portrait, encouraging the viewer to focus on the sitter’s penetrating gaze and serious demeanor. The restrained palette of earth tones and deep shades of black also help direct our attention on this young gentleman’s face and the confident character it communicates. The subtle modelling of the sitter’s features, the typical bust-length format, as well as the olive background suggest that the painting is by France’s leading portraitist after the Clouets, Corneille de Lyon. Although the man’s identity has yet to be determined, his rounded beard and attire conform to French fashion of the mid-16th century. In particular, the sitter’s toque and garments closely resemble those worn by the Calvinist jurist Laurent de Normandie in a likeness of 1552 (Musée d’Art et d’Histoire, Geneva, inv. 1928-13; see A. Dubois de Groër, Corneille de La Haye dit Corneille de Lyon, Paris, 1996, pp. 186-7, no. 89), as well as those seen in several other portraits of unknown gentlemen produced by the artist in this period.

Interest in portrait collecting intensified in France during the 16th century. Typically executed on an intimate scale, such as the present example, portraits were often kept in private settings, such as a personal study, where they could be examined at leisure. Corneille employed a variety of background colors throughout his career, including black and blue, and most frequently green, ranging from vibrant lime to more subdued olive. A monochromatic background of a hue similar to the one seen in the present portrait may be found in the Portrait of an Unknown Man in the Musée Bonnat, Bayonne (ibid., no. 104). Working from a photograph, Alexandra Zvereva has suggested that the present portrait may have been produced in Corneille de Lyon’s workshop (written communication, 18 November 2014), noting, however, that the beautiful treatment of the hair and beard as well as the somewhat maladroit proportions, particularly the oversized head, are typical of Corneille.

Notes: We are grateful to Marco Tanzi for identifying this painting as a work by Bernardino Campi, the preeminent Cremonese portraitist to the philo-Spanish Milanese aristocracy of the mid-16th century (written communication, 19 November 2014). The sitter’s identity remains a mystery, although his stylish black hat, with its gold and pearl encrusted chain, as well as his black jerkin and red and green striped doublet, suggest that he was an aristocrat of considerable wealth. In 1963, when the portrait was sold by the estate of famed collector Oscar B. Cintas, the young man was identified as the Marques de Zúñiga y Requesens, and the painting was accompanied by a letter from Adolfo Venturi dated Paris, 19 May 1928 supporting an attribution to Giovanni Moroni. Despite the sitter’s slight resemblance to Luis de Zúñiga y Requesens (d. 1576), who was governor of the Duchy of Milan in 1572, this identification must be put aside, especially in the absence of any inscriptions or coat-of-arms that would support the theory. Working from photographs, Tanzi dates our portrait to the late 1550s or early 1560s, around the time Bernardino Campi was painting his frescos for the Cappella del Santissimo Sacramento in the church of Santi Rustico e Fermo in Caravaggio. In particular, the jaunty flair and slightly amused expression of our elegant sitter recall the young man in a yellow doublet at the right of Campi’s fresco of Christ Washing the Disciples’ Feet (fig. 1).

Bernardino Campi was born in 1522 in Cremona, where he trained as a goldsmith in his father’s workshop, before studying painting with Giulio Campi (probably a distant relative). Bernardino then moved to Mantua to work under Ippolito Costa, and was then exposed to the oeuvre of Giulio Romano, which would have a decisive impact on his style, especially his Mannerist sensibility. In 1541, he returned to Cremona, where he received several prestigious commissions, most notably the frescoes for the ceiling of the chapel of Santi Filippo e Giacomo a San Sigismondo (1546), which he may have executed after a design by, or in collaboration with Camillo Boccaccino. That same year, Sofonisba Anguissola and her sister are documented as entering Campi’s household to receive instruction on painting, and Sofonisba at least would remain there for the following three years. Sofonisba paid tribute to her teacher with a work now preserved in the Pinacoteca Nazionale, Siena, representing Bernardino painting her portrait. During the remainder of his career, Campi enjoyed considerable success as attested to by the favor he was shown by the Gonzagas in and around Milan and the numerous important commissions he received in his native Cremona. His Paradise fresco for the dome of the church of San Sigismondo, Cremona (c. 1570) is often considered his masterpiece.

Although he was well known as a portraitist and his principle biographer Alessandro Lamo recorded several likenesses by him, only two of the artist’s documented works in this genre are known today: his portraits of Catellano Cotta (1553; Pinacoteca Civica, Cremona, Inv. 200) and Don Prospero Quintavalle (signed and dated 1556; Private Collection). A third painting of an unidentified woman, in the Metropolitan Museum of Art, New York (inv. 63.43.1) is also generally accepted to be by Bernardino. The present portrait thus constitutes an important addition to Bernardino’s oeuvre.

Dr. Peter Guggenheim (1927-2012) began a lifetime of collecting when he acquired a cuckoo clock as a gift from his grandfather, Daniel, at the age of six years old. Peter continued the Guggenheim family’s great legacy of collecting in the traditional Kunstkammer manner and for more than 60 years, together with Dr. John Abbott (b. 1925), they cultivated a renowned collection and generously loaned works to the Metropolitan Museum of Art, the Frick Collection, the Smithsonian, the Louvre, and the Royal Academy, among others. The Abbott-Guggenheim Collection: A New York Kunstkammer will be offered at Christie’s New York on 27 January 2014. 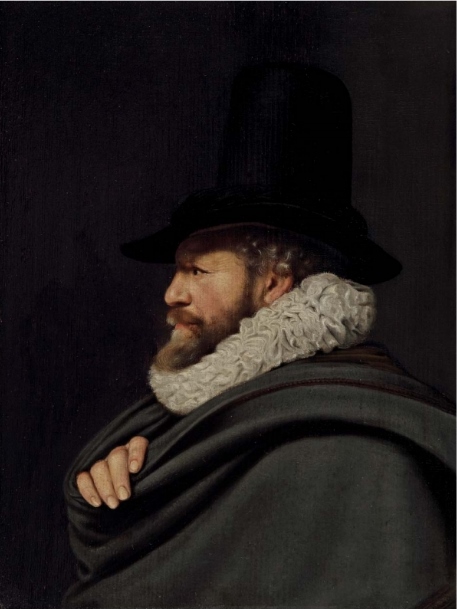 PROPERTY RESTITUTED TO THE HEIRS OF HANS LUDWIG LARSEN

Notes: Though unrecorded by Rudolf Oldebourg in his 1911 catalogue raisonné of De Keyser’s work, this distinguished portrait has been known to scholars since 1985. Recently the painting hung on the walls of the Amsterdam Historisches Museum as an autograph work by De Keyser, and was published in the Illustrated Summary Catalogue of the Netherlands Office for Fine Arts in the Hague as such. On the occasion of its restitution to the heirs of Hans Ludwig Larsen, the painting was brought to New York, and further study fully supports its status as an autograph painting by Thomas de Keyser, and an important addition to the artist’s early output as a portraitist.

As Ann Jensen Adams has noted, the present sitter shares his braided cloak and finely pleated ruff with the figure in the lovely Portrait of a Blond Youth in the collection of the Earl of Bradford, Weston Park. Both paintings also present the sitter in full profile – a relatively rare format for De Keyser – and employ the same motif of showing the cloak gathered up about the sitter’s chest in his right hand. Like the Weston Park portrait and a second painting showing the same young boy at the Wadsworth Atheneum, Hartford (inv. 1899.5), the present work has been tentatively dated to the early 1620s. Such a dating is supported by the tall hat worn by the present sitter, a fashion in vogue in Amsterdam during the first quarter of the 17th century, and the tight, smooth painting of the skin and hair, which suggests the picture was made before De Keyser came into contact with Rembrandt’s broader impasto in the early 1630s.

Like the Hartford and Weston Park portraits, which both show the same boy, the present sitter reappears in a painting of somewhat larger dimensions in the Pushkin Museum in Moscow, which also repeats the present composition. Having access only to an old black-and-white image of this work, it is difficult to comment on its authenticity as an autograph painting by De Keyser, and Ann Jensen Adams lists it under “Rejected Works” in her dissertation. However, along with the Hartford/Weston Park paintings, this pair of portraits raises intriguing questions about De Keyser’s working practice in the early and mid-1620s. Like the Pushkin picture, the Hartford and Weston Park paintings measure about 50 x 40 cm., approximately twice the size of the present work.

Another group of pictures, whose dimensions are all almost identical to those of the present work, are datable to the mid- to late 1620s, and include a pair of portraits in the Metropolitan Museum of Art, New York (invs. 2005.331.5 and 2005.331.6). Two other sets of portraits showing the same sitters in identical costumes and poses are also known: a pair of pictures in a private collection in Switzerland, and another pair divided between the Allentown Art Museum in Pennsylvania and the former collection of Adolphe Schloss (see W. Liedtke, Dutch Paintings in the Metropolitan Museum of Art, New York, 2007, I, figs. 95-100). All six pictures are considered to be autograph works by Thomas De Keyser and all date between c. 1626 to 1628. As Walter Leidtke notes, “[i]t was not unusual for Netherlandish portraitists to supply multiple versions of portraits to patrons, so that different members of their family might have them” (op. cit., p. 398). It is tempting to suggest that the present work and its counterpart in the Pushkin Museum, might have been made for exactly this purpose.

The identification of the sitter has been the subject of some debate. Jensen Adams notes that the man is “said to be Pieter Cornelisz. Boom”, an identification which had been suggested on the basis of an old inscription on the verso of the present panel (fig. 1) and a tenuous link to the profile portrait of a main in De Keyser’s grand Four Burgomasters of Amsterdam Being Informed of the Arrival of Maria de’ Medici in September 1638 (Mauritshuis, The Hague, inv. 78). Aside from the fact that the relevant gentleman in the group portrait has now been re-identified as Petrus Hasselaar, the physiognomic similarities are not convincing. Another man at the far left of the group portrait, now identified as Abraham Pietersz. Boom, has also been suggested as the subject of the present work, but the features of that gentleman bear little relation to those in the present portrait.

The most interesting suggestion thus far relates to a drawing attributed to the artist’s brother, Hendrick de Keyser (fig. 2). Now in the Morgan Library, New York (inv. 2001.17), the drawing is clearly related to the present composition, and is recorded as early as the late 18th century in the Amsterdam collection of Ploos van Amstel, where it was listed by the owner himself as showing “de Keyser beeldhouwer” or, “the sculptor De Keyser”, a clear reference to Hendrick who was an important Amsterdam architect and sculptor. The monogram on the drawing which reads “HDK” in ligature is identical to that in Hendrick’s three signed sculptures, and has been shown to be contemporary with the ink on the rest of the drawing (see J.S. Turner, Dutch Drawings in the Pierpont Morgan Library: Seventeenth to Nineteenth Centuries, New York, 2006, I, no. 110). How, then, could this work be related to the present picture? One possibility is that the drawing is a self-portrait by Hendrick, and that on his brother’s death in 1621, Thomas transformed Hendrick’s likeness in paint to serve as a family memory. This fascinating addition to De Keyser’s oeuvre can be counted among the artist’s earliest known pictures, painted when he was just beginning to establish himself as the leading portraitist in 17th-century Amsterdam. 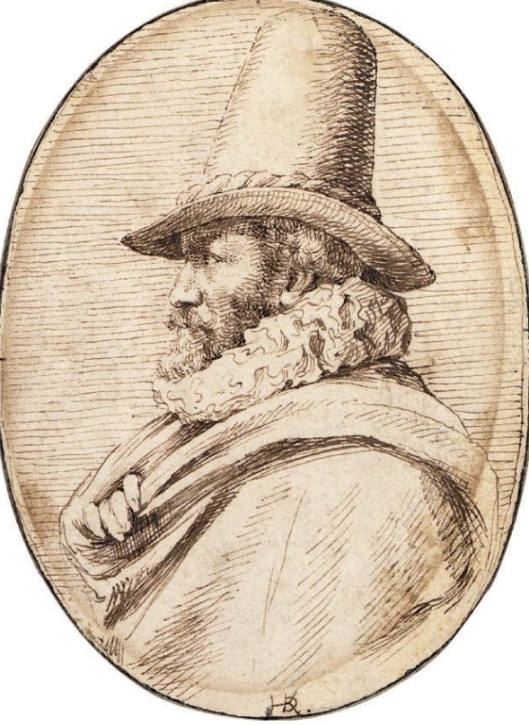