A gilt bronze figure of Vajradhara, dating from the 15-16th century, sold to a Chinese buyer for £28,800 against an estimate of £3,000 – £5,000. It was given as a gift by the previous owner who served as a diplomat in India during the 1960s. Photo courtesy Arthur Millner

Arthur Millner’s Islamic, Indian, Himalayan and South-East Asian Art was most comprehensive since his first online auction at 25 Blythe Road in April 2013, with over 400 lots. Included were a large selection of Himalayan, Indian and Asian bronzes with some very good prices achieved. All prices include buyers premium.

Seated on a double lotus throne, his arms crossed at his chest holding a vajra and ghanta, wearing elaborate crown and inlaid jewellery

Provenance: Private Collection, Spain. Given as a gift by the previous owner who served as a diplomat in India during the 1960s. 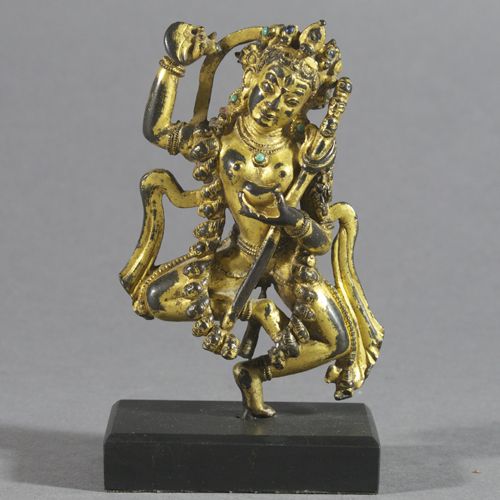 The dancing goddess holding a karttrka in her raised right hand, a kapala in her left, clasping a khatvanga against her keft shoulder, wearing a long skull necklace, her jewellery and crown with turquoise and glass inlay, traces of red pigment in her hair, mounted on stand

The wrathful goddess Vajravarahi (‘Diamond Sow’) has a miniature sow’s face protruding from the side of her head. Vajravarahi is the consort of the important Buddhist yidam (tutelary deity) Samvara. She is also worshipped in her own right as the Protectress of the Hidden Knowledge and the Keeper of Secrets of Vajrayana Buddhism. Vajravarahi is the only goddess in Tibet who reincarnates in a recognised succession as the incumbent abbotess of Samding monastery near lake Yamdrok

Condition: Gilding worn in places, loss of ribbon on right.

Seated in dhyana sauna on a double lotus throne, his right hand in bhumisparsa mudra, his left in dhyana mudra, with elongated ear lobes.

Condition: Formerly lacquered and gilded, only traces remaining, base and contents missing.

Wood sculptures also did well with a selection of architectural carvings going over their estimates, and among the buff sandstone sculptures a monumental Jain head, from the 8/9th century sold for £3,600. The metalwork also achieved some high prices such as a Bidri Talismanic bowl, circa 1800s, selling for £2,280 against an estimate of £500 – £800. Islamic tiles had some good interest with a 17th century Mughal Cuerda Seca tile selling for £1,560, well over its estimate of £600 – £800, as did three 16th century Ottoman Dome of the Rock tiles, probably from Jerusalem, which sold for £1,920 against an estimate of £600 – £800.

Buff sandstone, with elongated eyes, urna on his forehead and tightly curled hair, his head surmounted by a domed usnisa, 40cm high.

Provenance: British Private Collection, acquired by the vendor on the London art market around 1981. This superb over-lifesize head typifies the transitional style between the idealised naturalism if the Gupta period, and the more linear stylised idiom of the so-called mediaeval period. It would originally have formed part of a stele, as it is uncarved at the back. With its wide rounded face and distinctive eyes, it recalls the head of a Vishnu figure in the Norton Simon Museum: see Pratapaditya Pal, ‘Art from the Indian Subcontinent’, no.91 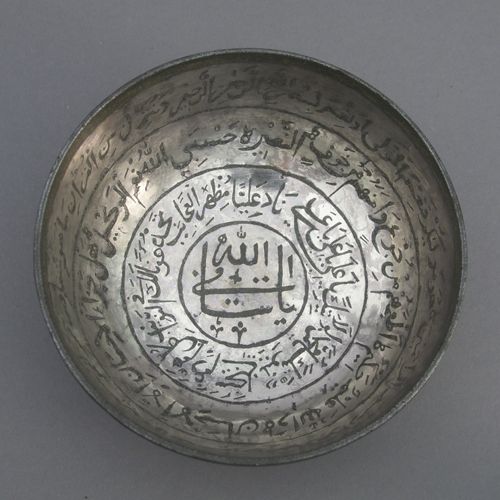 Private collection, France, acquired at the Drouot salerooms before 1999. The incomplete inscription reads: ‘bada darash gosh[adeh] (?) « May its door be open (?) »

Condition: Edges with various chips, one with slightly pitted surface, no restoration or repairs