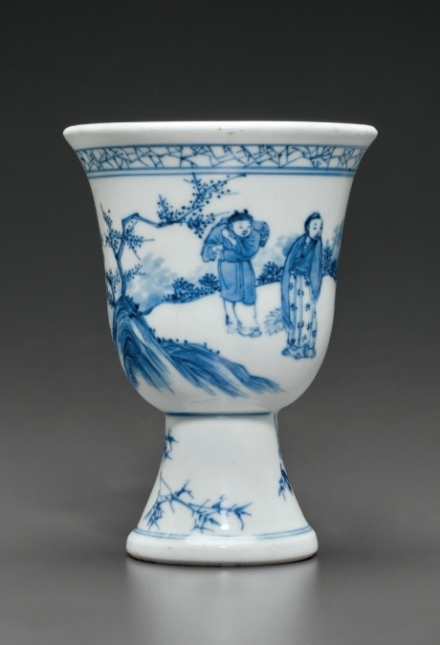 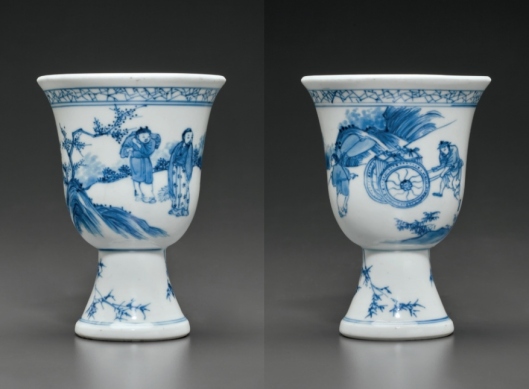 The bell-shaped cup is supported on a tall, hollow and spreading foot and is decorated on the exterior with a scene from the poem of ‘The Eight Immortals of the Wine Cup’, with Li Jin accompanied by two attendants and a peddler pushing a wine cart, all within a rocky landscape set between a ‘cracked-ice’ band at the rim and thin bamboo branches on the foot. The foot rim is unglazed. 5 in. (12.7 cm.) high – Lot 3557

Notes: The poem ‘Eight Immortals of the Wine Cup’ (Yinzhong baxian) was written by the famous Tang dynasty poet Du Fu (AD 712-770) who, like many Tang dynasty men of letters, derived considerable enjoyment, and, apparently, inspiration, from drinking wine. In his poem he chose to celebrate the drinking habits of other literary men of his time, including that of his great friend Li Bai (AD 701-762). The poem provided the subject for paintings at least as early as the Yuan dynasty (1279-1368), and appeared as decoration on porcelain in the Qing dynasty Shunzhi reign (1644-1661), although it was particularly popular in the Kangxi reign (1662-1722) (see lots 3587, 3588).

On this cup one of the eight, Li Jin, Prince of Ruyang, is depicted glancing wistfully backwards towards a wine cart. As Du Fu described him:
‘Ruyang can drink three gallons [of wine] by daybreak,
But when a wine cart passes his mouth still waters,
He would prefer to take up an appointment in Jiuquan [Wine spring].’