The vase is of elongated cylindrical form and decorated in rich tones of cobalt blue with a dynamic, continuous hunting scene depicting four equestrian huntsman, one possibly the Tang dynasty Emperor Ming Huang (Xuanzong), having already shot the crane pierced with an arrow above, as two others attempt to catch the prey and the fourth equestrian gallops along with a fifth huntsmen on foot in pursuit of an elusive deer, all beneath leafy floral scroll bands at the shoulders and waisted neck, and above a lappet band at the foot. 16 in. (40.6 cm.) high – Lot 3532 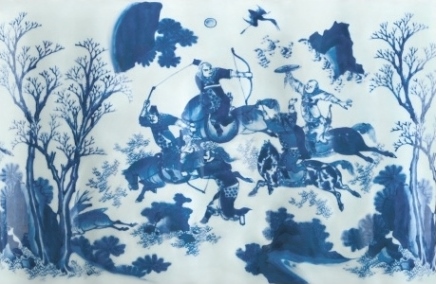 Notes: This extremely handsome vase represents the apogee of narrative painting on porcelain at the end of the Ming period. The vessel itself is strongly potted and the continuous scene that encircles the main body of the vase is well painted in deep, rich, underglaze cobalt blue. The narrative scene shows four huntsmen mounted on galloping horses. One huntsman swings a flail, a handle to which a ball on a chain is attached, while another fires a bow and arrow in the ‘Parthian shot’ position – facing backwards and firing over his horse’s rump. This shot, which takes its name from Parthian cavalry, who used it to great effect when in retreat, required great skill from the rider who had to twist his body around, control his horse with his knees alone, and keep both hands steady to fire his arrows, while the horse galloped at full speed. This huntsman appears to have shot a crane, which is depicted with wings outstretched and its body pierced with an arrow. Another of the mounted huntsmen reaches up with arms outstretched towards the bird, while a fourth holds out a circular tray on which he obviously hopes to catch the falling bird. There is a further archer on foot aiming his arrow at the deer which is being chased by the mounted huntsman brandishing the flail.

It is almost certain that this scene represents a story about the Tang dynasty Emperor Xuanzong (AD 685-762), who is often referred to by his posthumous name, Ming Huang. It is believed that Emperor Xuanzong went hunting in Shayuan on the day known as the ‘double ninth’ – the ninth day of the ninth month in the Chinese lunar calendar. This day usually falls in October by the Gregorian calendar, and is thus in autumn. It is significant that the elegant trees shown on one side of the vase are depicted almost completely stripped of their leaves, suggesting that the scene takes place in the latter part of the year. While hunting on the ‘double ninth’ Emperor Xuanzong reportedly shot a lone crane flying in the mountains. However, despite being pierced by the arrow, the crane continued on its flight towards the southwest with the arrow still lodged in its body. Many years later the Emperor visited a Daoist monastery near Yizhou – present day Chengdu in Sichuan province. While he was there he found his arrow, and realised that he had in fact shot a Daoist immortal.

This theme would have appealed to 17th century literati as it has been suggested that the story of Emperor Xuanzong and the crane may have inspired one of the best-known works of one of China’s most esteemed literary figures, Su Shi (AD 1037-1101). Su Shi wrote two prose poems on the Red Cliff. It was believed that at the Red Cliff, some 900 years prior to Su Shi’s visit, that Cao Cao (AD 155-220) a powerful military and political figure in the latter part of the Eastern Han period and during the Three Kingdoms period was defeated by the armies of Liu Bei and and Sun Quan. Cao Cao is believed to have written the poem known as Short Song Style in the winter of AD 208 shortly before the Battle of the Red Cliff. In the first of Su Shi’s prose poems one of his companions on the convivial moonlight boat trip to visit the Red Cliff plays melancholy flute music reflecting his sadness at recalling Cao Cao’s defeat, but is cheered by Su Shi’s philosophical discourse on the inevitability of change. It is, however, in the second of the Red Cliff prose poems that the possible influence of the story of Xuanzong and the crane can be seen. This second work recounts another visit to the Red Cliff, three months after the first – and nearer to the time of year when Xuanzong shot the crane. There is a heavy frost and the landscape appears rather bleak. Su Shi leaves his guests in order to climb to the top of the cliff and sits, increasingly melancholic, until forced to return to the boat by the intense cold. Shortly before midnight a lone crane flies in from the east and swoops over the boat before heading towards the west. That night Su Shi dreams of a Daoist immortal in feathered robes, who asks him about his visit to the Red Cliff. Su Shi enquires as to the Daoist’s name, but he does not answer, and when Su Shi awakes there is no sign of him. Su Shi realizes that the crane he had seen at the Red Cliff had in fact been the immortal.