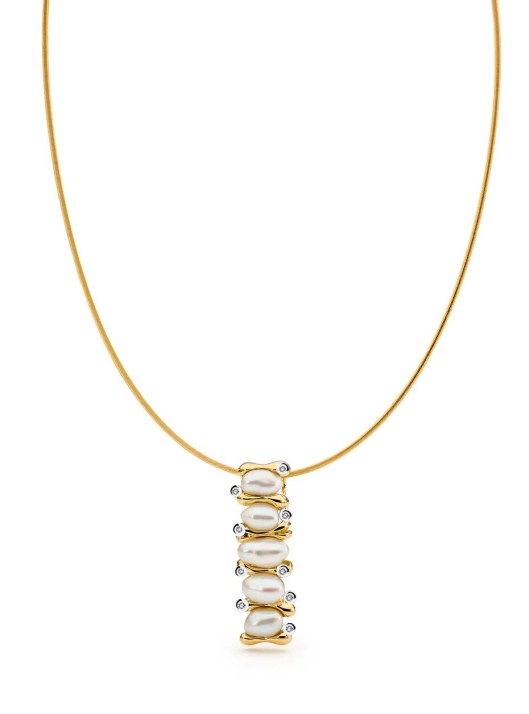 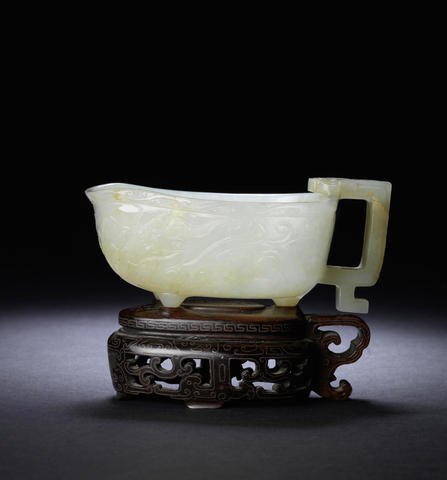 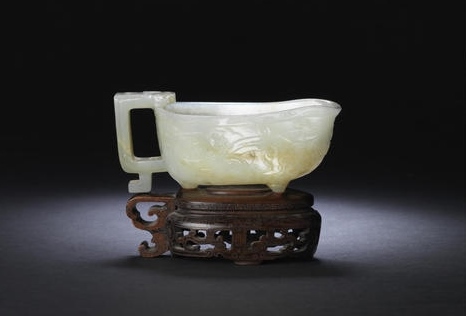 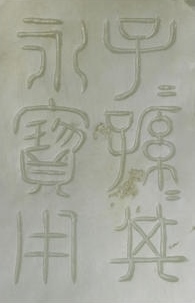 Raised on three small feet with a squared handle opposite the pouring lip, elegantly decorated on each side of the body with a sinuous chilong below a narrow band of scrolls, the base with a six-character zhuanshu inscription, the stone of a pale green tone with very slight pale grey-brown inclusions, silver-inlaid pierced wood stand. 11.2cm (4 1/2in) long (2).

Provenance: W.G.Wrigley, prior to 1936
Roger Keverne Ltd., London, acquired on 10 May 2002
A distinguished English private collection

Notes: The inscription reads 子孫其永寶用 Zi sun qi yong bao yong which translates as: ‘My sons and grandsons may preciously make use of it in eternity.’ 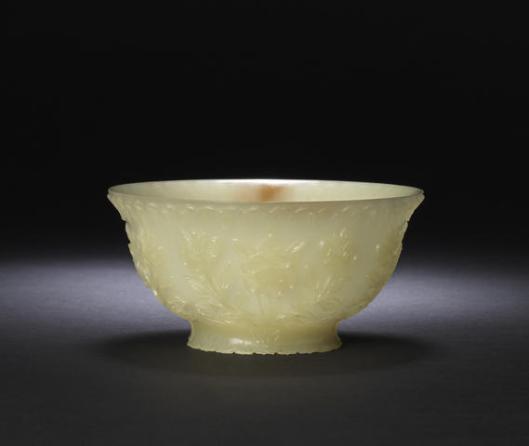 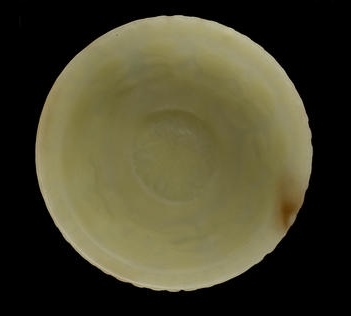 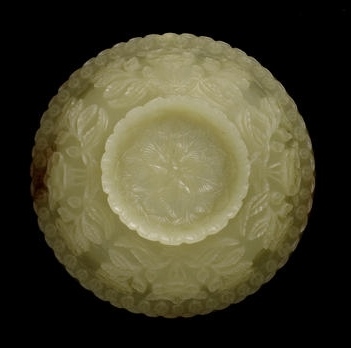 Very crisply carved around the exterior with four symmetrical arrangements of a fully-blooming lotus flanked by two half-opening blossoms, the stems issuing from a single vase, all beneath pendent leaves below the flaring rim, the flower-shaped foot elaborately carved as an opening flower on the underside, the stone of even yellow-honey tone with a rich chestnut inclusion, wood stand. 12.2cm (4 3/4in) diam. (2).

Provenance: The Lionel Edwards Collection, by repute
Queen Marie of Yugoslavia (1900-1961)
The Collection of Frank C.Bennett (1900-1973), probably purchased at Spink & Son Ltd., London, and thence by descent
Property from an old English collection

Note: The bold decoration of the present lot is inspired by the designs and compositions found on Mughal jades. Floral motifs including a large bloom on a stalk, between two smaller blooms on stems are seen on Islamic works of art and architecture. Examples of this composition of floral motifs on Mughal jade works of art in the National Palace Museum, Taipei include: a bowl with poppies illustrated in Exquisite Beauty – Islamic Jades, Taipei, 2007, p.78, no.73; and a spinach-green jade bowl with lilies ibid., p.71, no.62 which is also carved on the base with a foliate design.

Linneys pendant necklace in white and rose gold with an Australian South Sea pearl, a pink diamond and a white diamond. 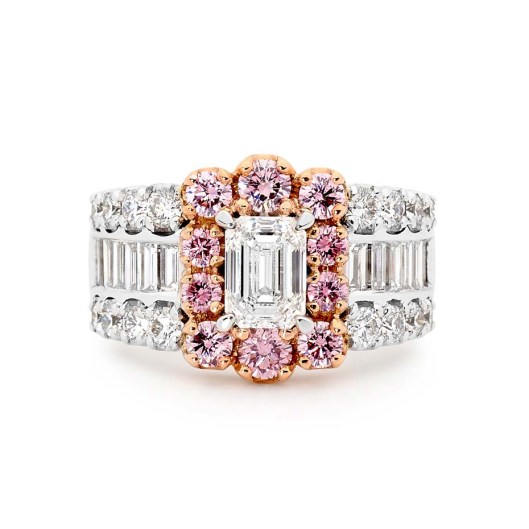 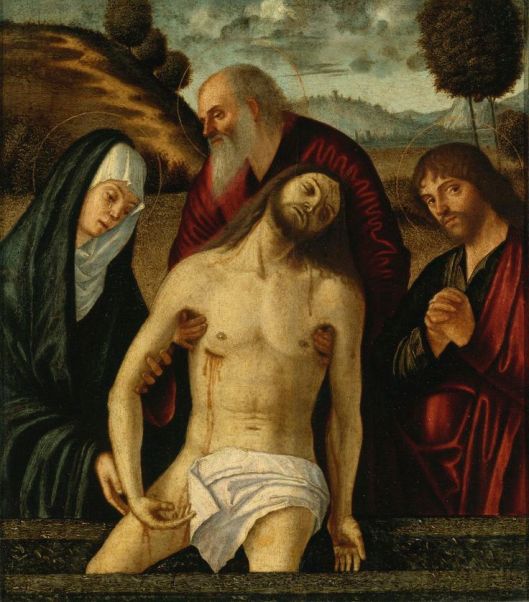 PROVENANCE: Oreste Basilio, Trieste;
From whom acquired in 1934 by Count Alessandro Contini-Bonacossi, Florence;
Thence by descent to the present owner.

Notes: This arresting image was painted by Vittore Carpaccio, one of the rarest and most talented artists of the Venetian Renaissance. Along with Giovanni Bellini, Carpaccio was among the leading protagonists of the ground-breaking artistic developments which took place in Venice at the end of the fifteenth century and he is perhaps best known today for his large narrative cycles produced for the religious confraternities in Venice known as scuole. While the influence of Bellini is inescapable in Carpaccio’s work, the lively style he developed was entirely his own and displays a lyricism and virtuosity unmatched by his contemporaries.

The size of the panel implies it was destined for private devotion, and the pathos with which the body of Christ is presented to the viewer as an object of mournful worship also supports this view. The painting finds echoes in similar works by Bellini such as the grisaille in the Uffizi, Florence.1 Similarly, Carpaccio’s Dead Christ supported by two angels in the Serristori collection in Florence also looks back to Bellini’s treatments of the same subject in the National Gallery, London, and in the Museo Correr, Venice.2

The present composition stands out not only for its overall balance but also for its subtle internal echoes which create rhythm and movement. The artist has painted two perpendicular lines in the composition, running vertically through the center of the design and horizontally through the heads of Mary, Jesus and John, meet at Christ’s neck. A diagonal runs lower left to upper right through Christ’s torso and, again at Christ’s neck, meets the line which runs through the path upper left down to the lower-right corner. Mary and John provide a harmonious frame to the sides of the design. The tilts of the figures’ heads is not accidental: sideways movement is created by the opposing direction of the heads of Joseph and Jesus in the center, as well as those of Jesus and John to the right. Perhaps the most enjoyable detail is the repetition of the contours of the winding path upper left in Joseph’s sleeve, to the right of Christ’s head.

The central figure is repeated in the majestic Meditation on Christ’s Passion (fig. 1) in the Metropolitan Museum of Art, New York, which can be dated to 1508-15, as well as in a panel sold London, Christie’s, 7 December 2010, lot 2.3 Presumably these are all based on the preparatory drawing for the body of Christ (fig. 2) on the verso of a study in the British Museum, London, for the Arrival in Rome from the cycle for the Scuola di Sant’Orsola, Carpaccio’s earliest extant dated work (now in the Accademia, Venice).4 The Orsola cycle dates to the 1490s, so either the present work is from a similar date, as proposed by many scholars, among them Humfrey and Berenson, or, as proposed by Sgarbi and Muraro, the panel was produced later, circa 1508-11, which would mean that the artist kept his sheet and used his study of Christ’s torso some twenty years after producing the drawing. 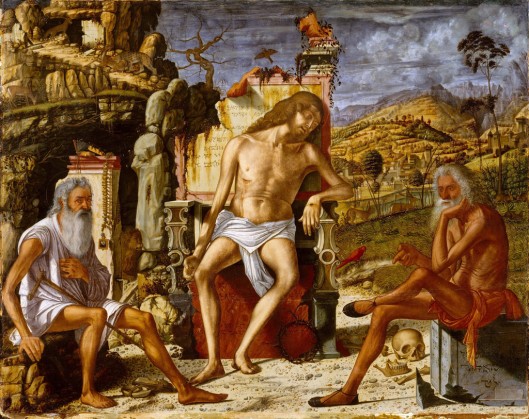 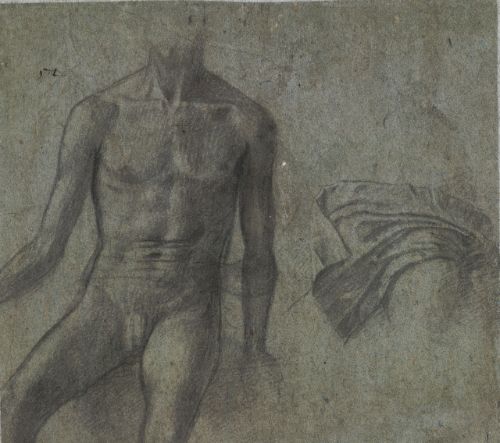 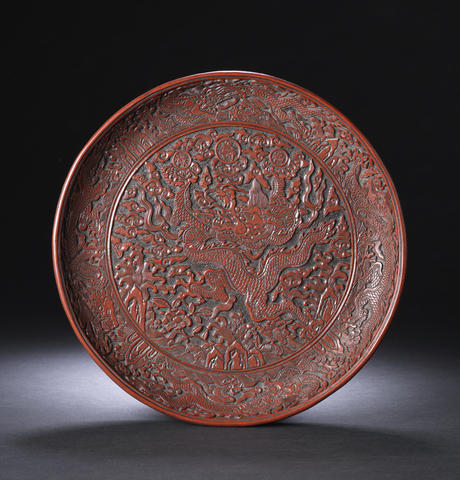 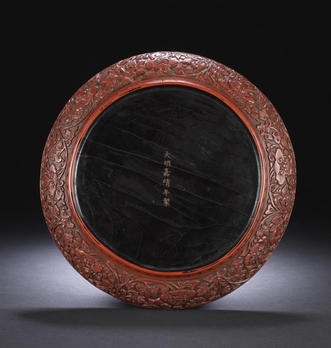 The shallow dish skilfully carved on the centre with an elaborate large dragon, striding amidst flames and clouds above crashing waves and rockwork, grasping at two of the three small roundels above its head reading fu, shou, lu, within a band of four dragons divided by waves and rockwork, the exterior with leafy floral stems and various emblems, wood box and cover. 22.1cm (8 3/4in) diam. (3).

Notes: The present dish belongs to a group of Jiajing-marked lacquer wares with five-clawed dragons carved in a similar vigorous and lively style. The auspicious characters shou, fu and lu (longevity, good fortune and high salary) also appear in peach roundels on a Jiajing period lacquer dish, illustrated in Collections of the Palace Museum. Carved Lacquer ware, Beijing, 2008, Catalogue no.85. See also a bowl with a similar design, Jiajing mark and period, illustrated in Carving the Subtle Radiance of Colors: Treasured Lacquerware in the National Palace Museum, Taipei, 2008, pl.88.

A related three-colour box and cover, Jiajing mark and period, was sold in our London rooms, 11 November 2010, lot 429. 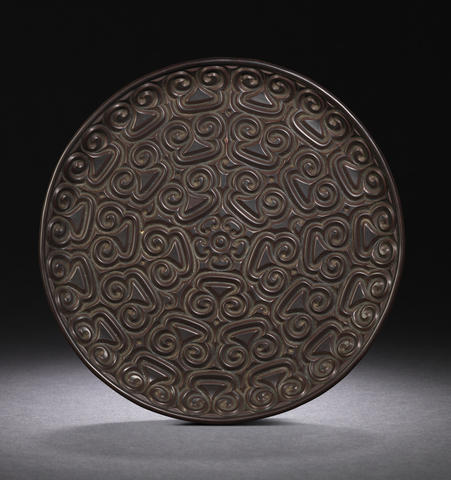 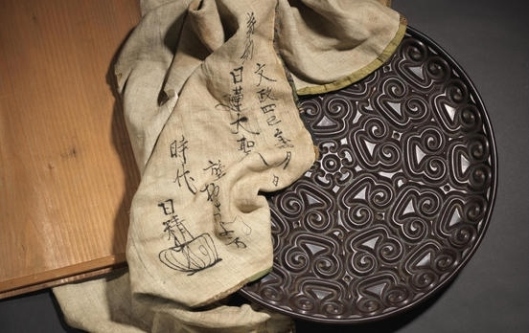 The circular dish of shallow rounded sides, well carved in relief through layers of black and thinly layered cinnabar red lacquer with bands of ruyi-head scrolls issuing from the central flower head, the reverse further decorated with alternating ruyi-heads at the cavetto, Japanese cloth, wood box and cover. 47cm (18 1/2in) diam.

Provenance : According to labels on the box given by Osayo and devoted to Nichiren Daishonin, April 1821, with an earlier dedicatory inscription ‘Nissei’ (1600-1683)
Mr Kenzo Hasegawa (1886-1957), founder of the Kaisendo Museum, acquired circa 1950
Kaisendo Museum, Yamagata

Notes: The present lot is of a particularly imposing size and would have posed a challenge for the carver to produce. Lacquerware of such size is more typically seen on large boxes and furniture, but rarely is it demonstrated in dishes or trays, perhaps due to the increasing structural challenges, which therefore require a central brace against the back. 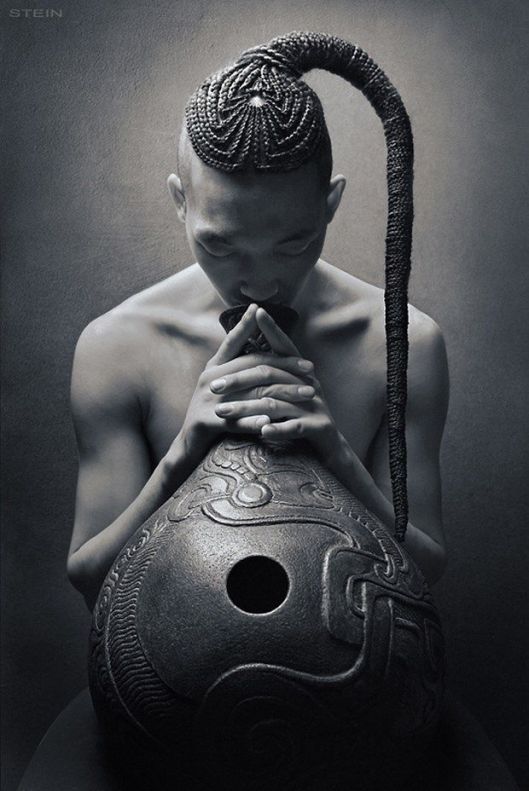 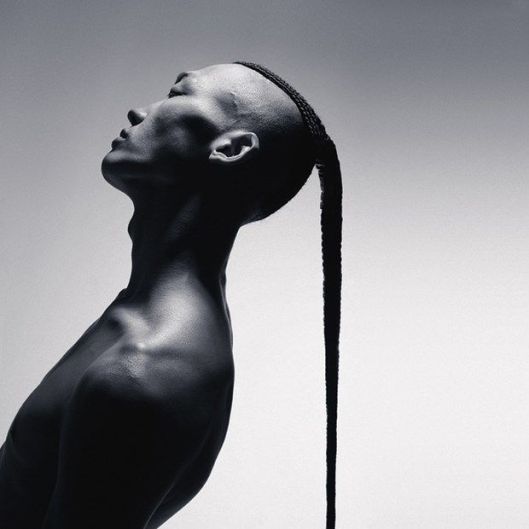 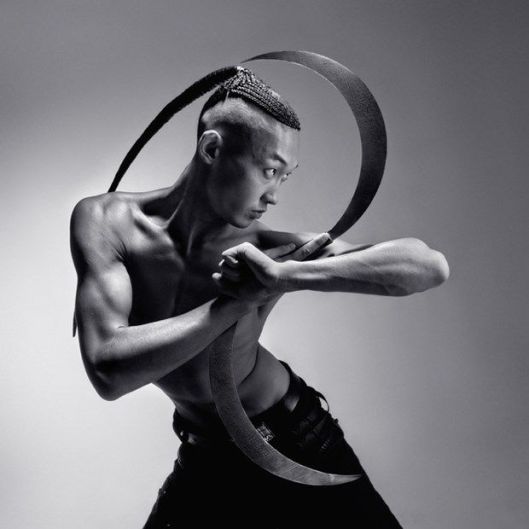 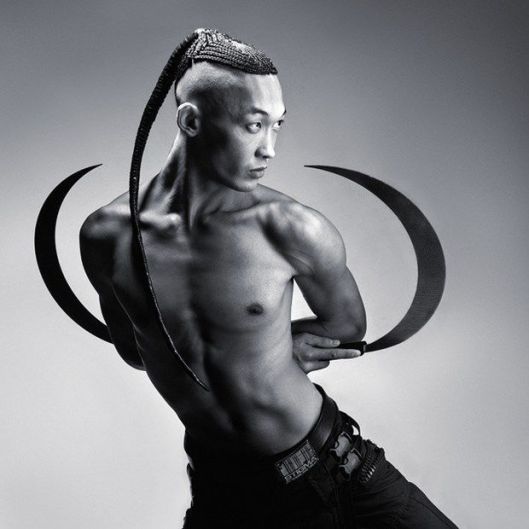 Portraits with Hairstyles by Petr Dmitriev 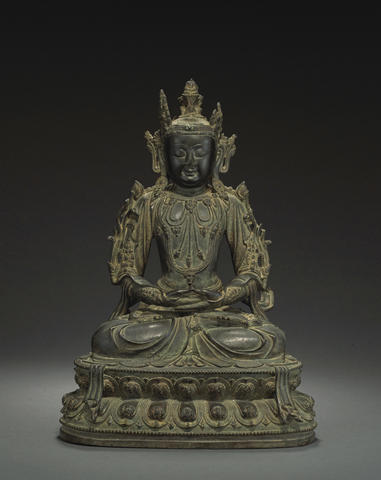 Seated dhyanasana on a double lotus pedestal base with hands in dhyana mudra resting on a richly decorated robe and under a jewel-laden chest, the crowned figure with downcast features and pendant ears framing powerful shoulders. 18 1/2in (47.5cm) high

Property from the Collection of Frank and Georgia James

Possibly Manjusri, seated dhyanasana on an elaborately draped double lotus pedestal base, one hand holding a lotus stem, the other holding a jewel, with two lotus stalks flanking the powerful shoulders, one supporting the remnants of a book, the other the base of a sword, both enclosing the voluptuous face with downcast eyes framed by an elegant jeweled and floral draped crown, the slim body adorned with pendant jewels falling from the waist and to the front chest. 28in (71.2cm) high

Property from the Estate of Ralph and Joan Kramer, Sedona, Arizona

Provenance: by repute, purchased in Mukden in 1923, by descent to the current owners.