Daoguang seal mark and of the period, dragon and phoenix bowl, wucai 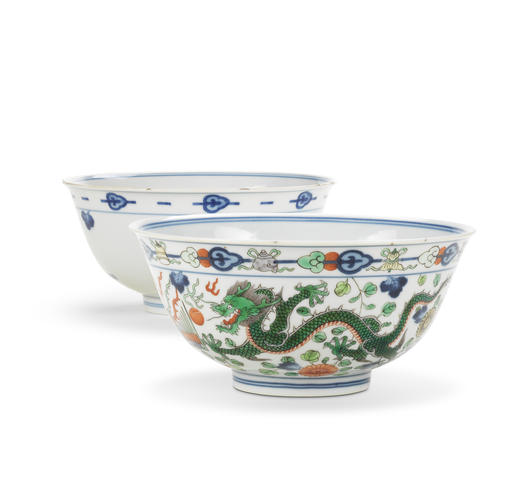 Finely painted around the exterior in underglaze blue and enamelled with iron-red and green writhing five-clawed dragons in pursuit of flaming pearls, divided by descending phoenix, all amidst blossoming leafy scrolls, below a band of linked ruyi-heads and bajixiang emblems at the rim, the interior centred with a medallion enclosing a single writhing iron-red dragon amidst flame scrolls, the base with a six-character zhuanshu seal mark; together with a blue and white bowl, Qianlong seal mark and of the period, unusually without the enamels. Each 15.6cm (6 1/8in) diam. (2).

Note: The design for this type of ‘dragon and phoenix’ bowl was first developed in the Kangxi reign, and continued throughout the 18th century and into the late Qing dynasty. The Qianlong bowl in the present lot showcases how areas of the design were first executed in underglaze blue, with the rest of the decoration completed with low-fired enamels. Similar Daoguang mark and period bowls have been published including: one from the Simon Kwan collection exhibited at the The Chinese University of Hong Kong, illustrated in Imperial Porcelain of Late Qing from the Kwan Collection, Hong Kong, 1983, p.68, no. 44; and another illustrated by R.Krahl, Chinese Ceramics from the Gulexuan Collection, Lünen, 2003, no.139.

Superbly enamelled in brilliant famille rose colours of pink, lavender, blue, green, yellow, and red on a vivid turquoise ground, the body decorated with a continuous celebratory scene featuring a multitude of boys, two officials on horseback crossing the ruyi qiao accompanied by attendants holding parasols and a large entourage holding lanterns in various forms including lotus blossom, carp, elephant and Buddhist lion, warmly greeted by an awaiting crowd under the taiping tianxia gates, playing cymbals, blowing trumpets, alighting fire-crackers, playing drum and gong, all enclosed within bands of keyfret scrolls and lotus lappets at the foot and ruyi-heads at the shoulders, the neck further enriched with scrolling flowering lotus and two gilt-decorated shoucharacters, ending with another another band of ruyi-head frieze tucked under the trumpet rim, the base with a six-character zhuanshu seal mark. 33.5cm (13 1/4in) high

Notes: The depiction of a multitude of boys at play, the festive theme of ‘a hundred boys’, presents the auspicious wish for many sons. This motif is frequently seen in Chinese art, and was particularly popular on famille rose wares during the Qianlong reign and naturally continued in subsequent reigns. Many vases were depicted with variations of boys at play within courtyards, gardens, dragon boats, and other settings. Examples of various shaped Qianlong period vases with the ‘Hundred Boys’ decorative theme are illustrated in The Complete Collection of Treasures of the Palace Museum: Porcelains with Cloisonne Enamel Decoration and Famille Rose Decoration, Hong Kong, 1999, pls.121, 128 and 132. These Qianlong vases were likely the inspiration for ensuing vases from the late Qing period with the same theme.

The present vase is a fine example of the continued skill and abilities of ceramic decorators in the late 18th and early 19th century. This is demonstrated in the intricate representation of the many figures, each boy in his various pursuit, carefully detailed with different clothing and affects. The present lot is also unusual in depicting a gate that includes the phrases Zhuangyuan, Tianxia taiping, and Jidi. The phrase Zhuangyuan refers to the title given to the highest scores in the imperial jinshi examination, ‘Tianxia taiping‘ means universal peace, and jidi means to pass an imperial examination. Given that a successful pass at the civil service examination was required for a prosperous career in government, the phrases and their meanings make the vase especially auspicious.

Compare a smaller vase of similar but slightly more slender shape, the neck with a coloured ground and lotus scrolls, Daoguang seal mark and period, decorated with a hundred boys celebrating the Dragon Boat Festival, illustrated ibid., pls.168 and 194.

In a letter dated June 1, 1972 from Herbert Singer to Leo and George Kaplan, Mr. Singer comments:

« Nell is delighted, as am I, with the proportions of the ring and with its enhanced brilliance.
We are grateful to you for your wise advice and counsel. In expressing our gratefulness, it, of necessity, must extend to Dad not only for his impeccable judgment in a field in which he has attained world renown but, more importantly, for providing sons to whom he has imparted his skills, his standards of integrity and his dedication to excellence. » 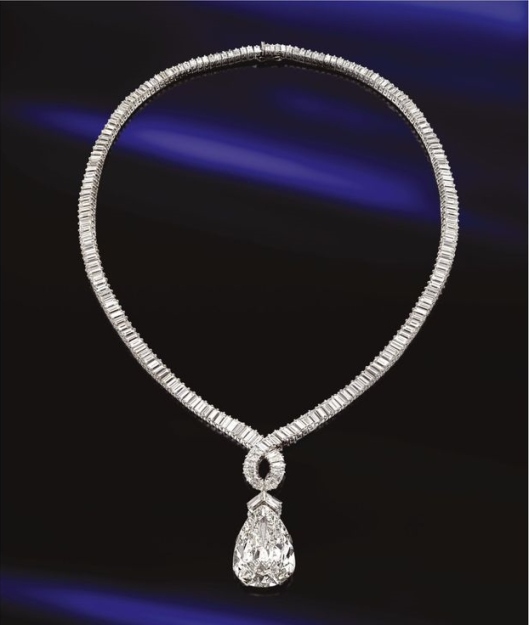 Accompanied by GIA report no. 15664939 stating that the diamond is J color, VS2 clarity. 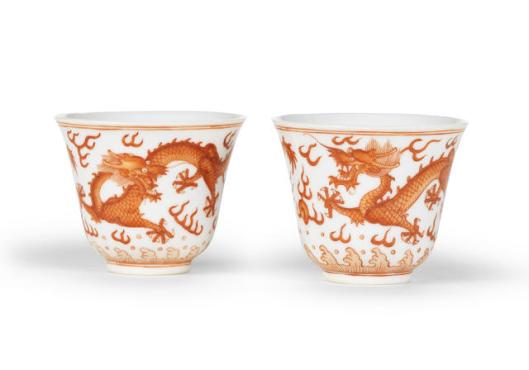 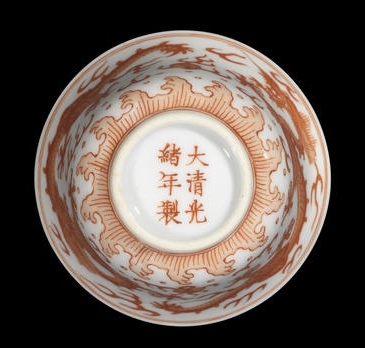 Each thinly and crisply potted, finely enamelled around the exterior in iron-red depicting two ferocious five-clawed dragons in flight chasing after flaming pearls, all amidst flaming clouds and above a band of crashing waves at the foot, each with a six-character kaishu mark at the base. Each 6cm (2 3/8in) diam. (2).

Note: The dragons on iron-red wine cups of the Guangxu reign, such as the present lot, are typically depicted with large heads on thin necks and long sinuous bodies. The band of cresting waves above the foot from this period is also characteristically naively rendered. Compare with very similar pairs of wine cups sold in our London rooms, one on 6 November 2008, lot 21, and another a pair on 15 May 2014, lot 80.

Densely decorated on the globular body and waisted neck with various finely detailed medallions, between stylised lotus lappets above the foot, a band of lotus blooms and shoucharacters on the shoulder, and ruyi heads on the mouth rim, all on a rich blue ground. 38cm (15in) high

Notes: Compare related vases of similar high quality and preservation of the gilding; see one illustrated in National Museum of History: Major Holdings of the National Museum of History, Taipei, 1988, p.72; another illustrated in The Wonders of the Potter’s Pallette, Qing Ceramics from the Collection of the Hong Kong Museum of Art, Hong Kong, 1984, pp.186-187, no.128; and one more example from the Kwan Collection included in the exhibition, Imperial Porcelain of Late Qing, 13 August – 25 September 1983, p.125, no.126. 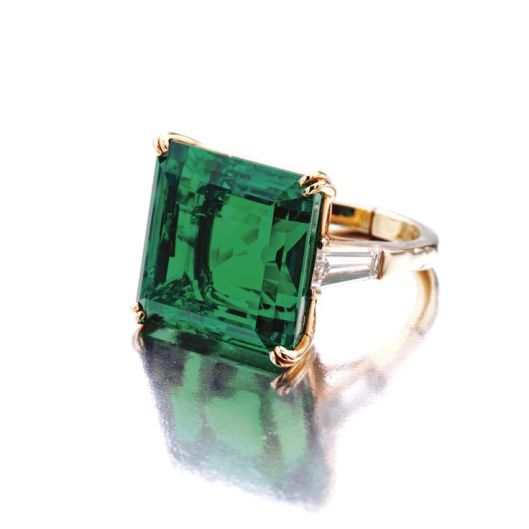 PROPERTY OF THE HERBERT AND NELL SINGER FOUNDATION, CONTINUED

« The 18.54 cts square faceted emerald which you have just purchased through us, came originally from the collection of an Indian potentate known for his love of fine and unique gems.
I succeeded in purchasing it after many attempts during one of my many visits to India. In my opinion, it is one of the finest emeralds of its size and importance which I have ever seen in my jewelry career; its color, clarity and brilliance are absolutely unique for a stone of this size. »

Letters from Louis Arpels dated August 8, 1968 and from their consultant on this sale, R.V. Sullivan of Vartanian & Sons, Inc., dated July 31, 1968, also attest to the exceptional quality of the stone.

PROPERTY OF THE ERICH AND DELLA KOENIG FOUNDATION

'Dragon' dish, Blue-and-White, Daoguang seal mark and of the period

Well painted with a centralised dragon in flight amidst flames and scrolling clouds in pursuit of a flaming pearl, the cavetto and exterior similarly decorated with pairs of striding dragons with a band of lotus leaf lappets at the foot, all reserved on a blue ground, the base with a six-character zhuanshu seal mark. 25.1cm (9 7/8in) diam.

Dishes with this particular decoration of a pair of dragons surrounding another large sinuous dragon on the centre, with large horned heads on sinuous bodies surrounded by stylised T-shaped clouds and flames, appear to have begun during the Kangxi reign. Many of the Kangxi period examples are applied with yellow enamel, including one in the Palace Museum, Beijing, illustrated in Qingdai yuyao ciqi, vol.1, Beijing, pp.138-141, no.36. Daoguang examples, such as the present dish, are noticeably more uniform in the composition of the bodies and scales of the dragons, as well as the clouds. Compare with a similar yellow-enamelled Daoguang example illustrated in Imperial Porcelain of Late Qing, Hong Kong, 1983, p.57, no.26. 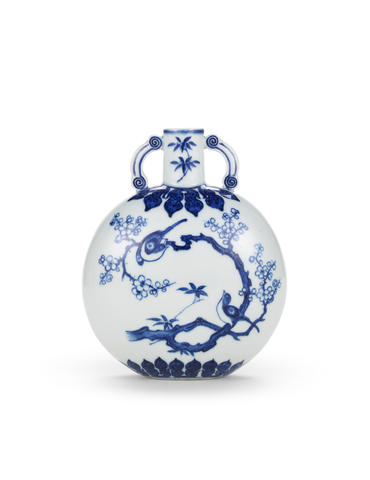 The flattened circular body delicately painted on each side in a deep, vibrant underglaze blue with a pair of magpies perching on a gnarled curved flowering branch, between rows of stiff ruyi-head lappets at the foot and at the shoulder, the cylindrical neck with two sprigs of bamboo between a pair of curved handles painted with scroll details, the base slightly recessed. 18.2cm (7 1/4in) high

Notes: The prototypes for the present lot are the great blue and white moonflasks from the Yongle period, a particularly fine example of which is currently exhibited in the British Museum and illustrated by R.Krahl and J.Harrison-Hall, Chinese Ceramics: Highlights from the Percival David Collection, London, 2009, p.59-61, no.28. However R.Scott also notes that the shape may originally derive from Syrian glassware, see Percival David Foundation of Chinese Art: A Guide to the Collection, London, 1989, Catalogue, no.61.

Similarly spectacular moonflasks were produced during the early Qing Dynasty: compare an example with a Yongzheng mark and of the period (36.5cm high), illustrated in The Complete Collection of Treasures of the Palace Museum: Blue and White Porcelain with Underglazed Red (III), Hong Kong, 2000, no.97. Another example also with a Yongzheng mark and of the period but decorated on yellow-enamelled ground (36.9cm high), is illustrated by J.Ayers, Chinese Ceramics in the Baur Collection, Vol.2., Geneva, 1999, pp.88-89 col. no.A573. See also a very similar piece (36.5cm high), unmarked but dated to the Yongzheng period, illustrated by J.Thompson, The Alan Chuang Collection of Chinese Porcelain, Hong Kong, 2009, no.34.

It is highly unusual to find a moonflask of such small size and delicacy, but it is interesting to note that the present piece is almost exactly half the size of the Yongzheng examples listed above. Compare another small moonflask (16.8cm high) decorated in blue and white with a dragon in puce enamel, sold in our London rooms, 17 May 2012, lot 347.