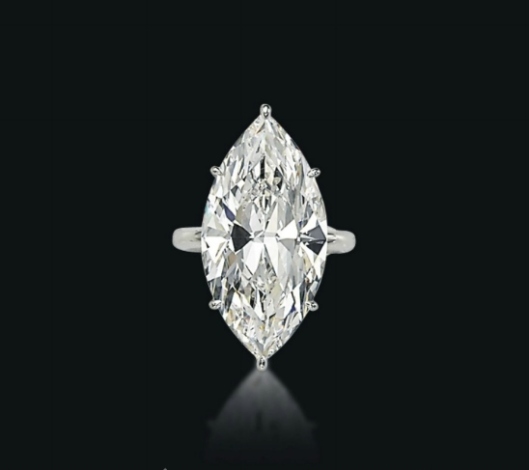 Accompanied by report no. 2105639793 dated 26 June 2014 from the GIA Gemological Institute of America stating that the diamond is G colour, Internally Flawless clarity

of compressed globular form rising to a short neck, supported on a straight foot slightly wedged on the interior, carved around the exterior with diagonally oriented ribs radiating down from the ribs, applied overall with a lustrous brownish-black glaze thinning to white on the rises, save for the foot and the knife-pared rim revealing a light-grey stoneware body – 11.5 cm., 4 1/2  in. 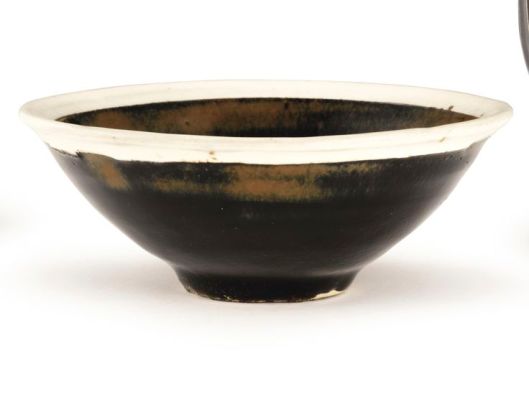 of conical form supported on a narrow footring, applied overall with a lustrous black glaze suffused with gold speckles and light ‘hare’s fur’ splashes around the interior and exterior rim, falling short of the foot revealing the buff-coloured stoneware, the rim dressed with a white glaze – 12.3 cm., 4 7/8  in. 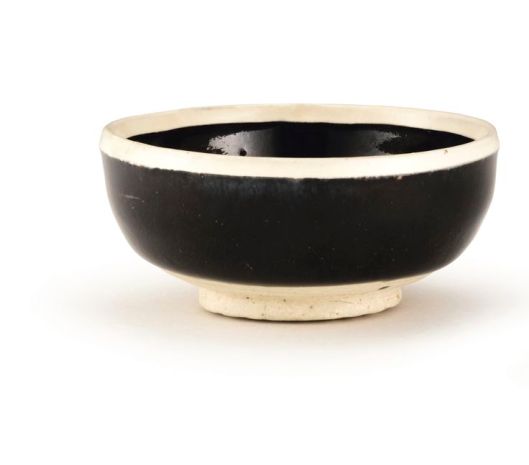 with shallow rounded sides supported on slightly flared foot, applied overall with an unctuous black glaze faintly suffused with gold speckles, the glaze falling neatly of the foot over the buff-coloured body, the rim dressed with a white glaze – 8.5 cm., 3 3/8  in.

the globular body applied in white slip with numerous vertical ribs running down from the short neck, beneath a lustrous dark brown glaze stopping in an even line above the foot, the interior glazed brown  – width 14.5 cm., 5 3/4  in.

the ovoid body with well-rounded sides rising from a recessed base to a flanged neck, covered overall with a lustrous black glaze faintly speckled with gold, swiftly painted on the shoulder with russet strokes evoking a flower spray, the countersunk base glazed, the knife-pared footring left unglazed revealing a buff-coloured body – 19.7 cm., 7 3/4  in.

NEW YORK – The Metropolitan Museum of Art’s marble sculpture Adam by Tullio Lombardo (ca. 1455–1532) will return to public view on November 11, following a tragic accident in 2002 and an unprecedented 12-year conservation project. It is the first life-sized nude marble statue since antiquity and the most important Italian Renaissance sculpture in North America. Tullio carvedAdam in the early 1490s for the monumental tomb of doge Andrea Vendramin, now in the church of Santi Giovanni e Paolo, Venice, and it is the only signed sculpture from that iconic monument. The sculpture and its restoration will be the focus of Tullio Lombardo’s Adam: A Masterpiece Restored, the inaugural installation in the Museum’s new Venetian Sculpture Gallery.

Thomas P. Campbell, Director and CEO of the Metropolitan Museum, said: “We are proud to return this great Tullio sculpture to public view in a beautiful new gallery.  Our extraordinary conservators collaborated with a team of experts over 12 years to pursue this extremely challenging work.  The results of their care and innovation are stunning.”

The installation of this gallery was made possible by Assunta Sommella Peluso, Ignazio Peluso, Ada Peluso and Romano I. Peluso.

On the evening of October 6, 2002, the pedestal supporting Tullio Lombardo’s 15th-century marble Adam collapsed in The Metropolitan Museum of Art’s Vélez Blanco Patio. The sculpture, which has been in the Museum’s permanent collection since 1936, was severely damaged. In the wake of the initial shock and distress over this accident, the Metropolitan Museum made a commitment to undertake a conservation project that would, to the fullest extent possible, return the statue to its original appearance. After 12 years of painstaking and pioneering conservation research and treatment, augmented by curatorial research, Tullio Lombardo’s restored masterpiece Adam will be unveiled in a new gallery specially created for this occasion.

The Metropolitan Museum, renowned for the depth of its curatorial, conservation, and scientific resources, was able to embark on this uniquely challenging restoration project by assembling a team of skilled and dedicated conservators, scientists, engineers, and imaging experts from both inside and outside the Museum. Their analysis, testing, and treatment have yielded a beautifully restored statue.  The project has also resulted in significant advances in the field of sculpture conservation, which will be presented in this exhibition and in the 2014 volume of the Metropolitan Museum Journal.

Tullio Lombardo came from a renowned northern Italian family of sculptors and architects. He carved Adam in the early 1490s for the tomb of Andrea Vendramin, doge of Venice. The monument is the most lavish of its kind, designed to resemble an ancient Roman triumphal arch, incorporating both classicizing and biblical reliefs and statuary. Tullio’s nude was inspired by idealizing ancient sculpture, but the sculptor subtly unbalanced Adam’s pose to show that he was not just God’s first perfect human being, but also the anxious victim of the Serpent’s wiles. Adamconveys the story of the Fall of Man, which with the images of Christ the Redeemer made him a suitable subject for a tomb monument. In this way, the memorial to an exemplary individual also meditates on humanity’s essential faults and its ability to overcome them. Adam originally stood in the niche to the left of Vendramin’s casket and effigy, which is now occupied by a helmeted warrior; a figure of Eve was meant for the other niche.

The tomb was originally located in Santa Maria dei Servi, but was moved to the basilica of Santi Giovanni e Paolo in the 1810s, where it remains. By 1821, Adam had been taken off the monument and brought to the Vendramin Calergi palace. In 1844 the Duchess of Berry bought the palace and its contents, and Adam remained with her descendants until 1931. By then Adamwas in Paris, where the banker Henry Pereire acquired it. His widow sold the sculpture to an art dealer in 1935, and the Museum purchased it the following year to much fanfare. Adam was displayed in several different Met galleries until the accident in 2002.

On impact, Adam broke into 28 large pieces and hundreds of smaller fragments. Fortunately, the head, face, and torso were relatively unscathed in the fall. The arms, which bore the brunt of the impact, the lower legs, and the decorative tree trunk suffered major damage. From the outset, it was clear that the treatment of the broken sculpture would be a formidable project, posing an unusual series of challenges with little in the way of past practice to draw on. The conservators had to find a method that would limit handling of the sculpture and position the heavy fragments precisely without abrading the fresh, vulnerable break edges. The importance of Adam warranted critical evaluation of the use of pins and adhesives traditionally used by conservators and an investigation into less invasive and more reversible approaches. Historically, the reassembly of large-scale sculpture has relied on the use of multiple iron or steel pins, supplemented, more recently, by structural adhesives such as epoxies. Shortly after the accident, the Museum’s conservators, conservation scientists, and curators, supported by an outside team of materials scientists and engineers, began an unprecedented multidisciplinary collaboration to determine the best course of treatment for the sculpture. The methods developed from this effort ultimately provided a new model for best practices and standards in the conservation of large stone sculpture.

Investigations began in 2003 with three-dimensional laser scanning of the major fragments. The laser scans led to a variety of research avenues including finite element analysis, a computer-based structural engineering investigation, which informed the team about the stresses and strains in the sculpture as well as the nature of the breaks. Extensive research and testing never before conducted on conservation materials was carried out to determine the best adhesives and pinning materials for the treatment. The innovative treatment of the sculpture followed, giving special attention to the use of mock-ups and empirical studies carried out in an effort to minimize handling of the fragile break surfaces on the sculpture. The fresh breaks to the Carrara marble posed several challenges to the conservators, and required them to diverge from traditional sculpture conservation techniques. For example, an external armature was developed that was sufficiently substantial to support the assembled sculpture without adhesive. The armature not only supported the sculpture during assembly but also served as the method of clamping the fragments once adhesive was applied. The related article in the Metropolitan Museum Journalsummarizes the research, drilling and pinning techniques, and how the armature was conceived, constructed, and utilized.

Following the structural work, the sculpture was carefully cleaned to remove surface grime that had accumulated over the years. Areas of loss were filled and toned to match the surrounding marble. The final stages of the treatment transformed the appearance of this damaged work of art so that it can once again be appreciated as a masterpiece of Renaissance art.

Adam’s return to public view coincides with the inauguration of a new gallery for Venetian and northern Italian sculpture. Adam will be exhibited there alone and in the round for nearly eight months, accompanied by an in-depth account of its conservation on digital screens and text panels.  Afterward, Adam will become the focal point of this permanent gallery, in a niche inspired by its original location on the tomb monument.  It will be joined by highlights of the Met’s sculpture from this period, including Cristoforo Solari’s Saint Catherine of Alexandria, which was purchased with the new gallery in mind.

The new Venetian Sculpture Gallery, a perfect cube, was designed with Renaissance ideals of geometry and proportion in mind. A novel lighting scheme, suggesting the suffused light of a chapel, and a seat at the center of the space, will create a meditative environment and encourage sustained encounters with important sculptures.

Accompanied by report no. 5161310894 dated 30 June 2014 from the GIA Gemological Institute of America stating that the 36.57 carat diamond is Fancy Intense Yellow colour, VS1 clarity

Report no. 1162311006 dated 1 July 2014 from the GIA Gemological Institute of America stating that the 10.40 carat diamond is Fancy Yellow colour, VS1 clarity and a working diagram indicating that the clarity of the diamond might be improvable (2)

Accompanied by report no. 2155429051 dated 8 April 2014 from the GIA Gemological Institute of America stating that the diamond is Fancy Brown-Yellow colour, VS1 clarity