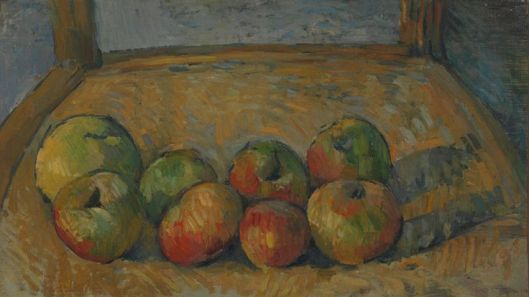 HAMILTON.- The Art Gallery of Hamilton presents a landmark exhibition of paintings by French Impressionist painter Paul Cézanne (1839-1906). The World is An Apple: The Still Lifes of Paul Cézanne is the first to treat Cézanne’s revolutionary still lifes. Ranging from early paintings engaging with past masters to late works unique to him, and treating the gamut of themes, including apples, flowers and skulls, the exhibition reappraises Cézanne’s monumental achievement in the genre of still life painting.

“Presenting this important exhibition is a high point in the Art Gallery of Hamilton’s year-long celebration of its centennial in 2014,” said Louise Dompierre, President and CEO. “We are thrilled to be able to bring masterpieces by one of the world’s greatest artists to Canada and delighted to be able to provide insights into Cézanne’s creative genius.”

The exhibition was conceived by Benedict Leca, AGH Director of Curatorial Affairs, and organized by the Art Gallery of Hamilton in a special collaboration with the Barnes Foundation, Philadelphia, where the show opened to acclaim earlier this summer and broke attendance records.

Uniting 18 Cézanne paintings from around the world and another seven still lifes by his contemporaries, the exhibition features major works from acclaimed European and American museums and private collections, including the National Gallery (Washington), Musée d’Orsay, Stiftung Langmatt (Baden), Kunstmuseum Solothurn, Philadelphia Museum of Art, the Detroit Institute of Arts, the Cincinnati Art Museum and the McMaster Museum of Art (McMaster University, Hamilton ON). 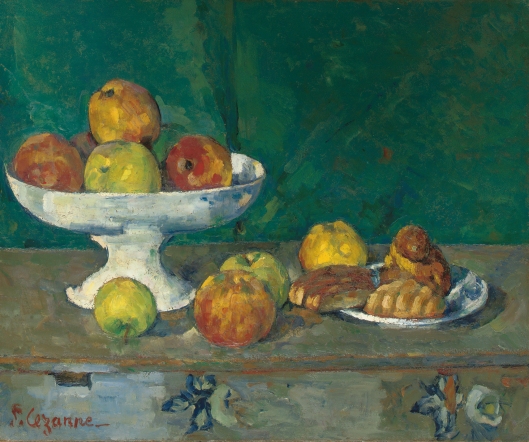 Soon after arriving in Paris in the 1860s, Cézanne created a notoriety for himself that was unprecedented in the history of French art. At the centre of this radical self-fashioning were still lifes of often glaring colours, skewed perspective, and thickly painted surfaces that unmoored objects and their meanings from conventional representation. Cézanne’s early work will first be put into context through the presentation of 4 exceptional realist still lifes from the AGH collection to show how he departed from convention. Early Cézanne will be represented in the exhibition by three first-rate works including the masterful Still Life with Bread and Eggs (1865) from Cincinnati. Later, Cézanne established his distinctive style through works such as Still Life with Fruit and Glass of Wine (c. 1877, Philadelphia Museum of Art) and Apples and Cakes (1877, Private Collection), recasting the physical and perceptual relations between people and things. Extending their traditional meanings as symbols of abundance, vanity, or rusticity, Cézanne instead used apples, skulls or crockery to create a visual language of punning juxtapositions and poetic allusion. His paintings invite viewers to rethink the world and the place of man and objects in it. 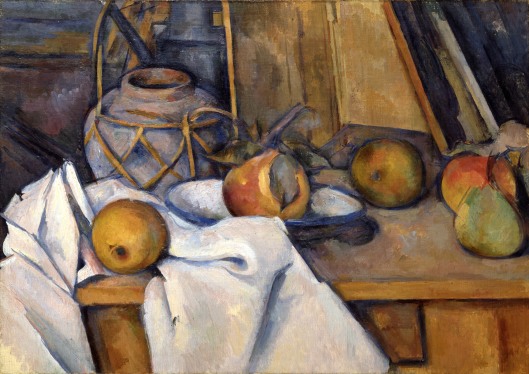 “While he surely looked closely at nature, Cézanne self-consciously plays with colours, forms and space in a manner that invites a free association that contrasts with the fixed meanings of academic tradition,” said exhibition curator Benedict Leca. “He creates an alternative world where things can move improbably and mean variously. The traditional ‘silent life of things’ that he explodes is about containment and Cézanne is all about evasion,” affirmed Leca.

As the so-called “Painter of Apples,” Cézanne returned many times to his signature motif, working through the complexities of colour application and its effects. Cézanne’s famous apple paintings will be represented by three exceptional examples: Seven Apples and a Tube of Color, Apples on a Chair (1878-80, Lausanne, Musée cantonal), and Some Apples (1878-80, Stiftung Langmatt, Baden). Also on view will be a contrasting pair of flower paintings: The Dark Blue Vase III (1880) from the Kreeger Museum is a small-scale, intimate work in which Cézanne explores pattern, while the large, late Vase of Flowers from the National Gallery in Washington exemplifies Cézanne’s late life obsessions with contours and surfaces. 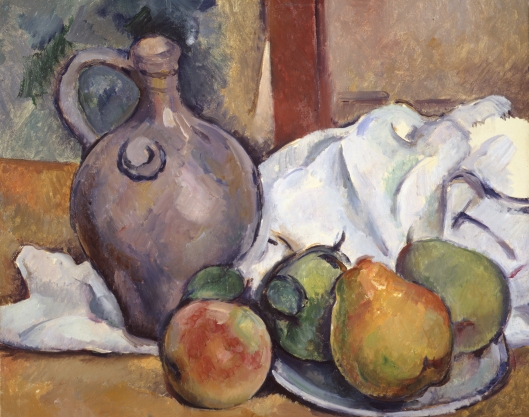 Over the course of his career painting still lifes, Cézanne pushed the boundaries of meaning and form while simultaneously evolving a highly structured compositional style characterized by ever more deliberate arrangements of objects. His so-called ‘Classic’ phase of still life painting culminates in the 1890s and is represented in the exhibition by major works such as the Musée d’Orsay’s The Kitchen Table (c. 1890) and Fruit and Ginger Pot (1890-93) from the Stiftung Langmatt. The latest works in the exhibition will be anchored by the two greatest paintings of skulls Cézanne ever created, Three Skulls (Detroit Institute of Arts) and Three Skulls on a Patterned Carpet (Kunstmuseum, Solothurn).

A prolific artist who synthesized formal problems through a close study of objects, Cézanne’s lifelong engagement with still life painting yielded what is arguably the single most innovative body of work in the genre of any artist in the Western canon. Ultimately, Cézanne set still life painting on a new course, one that completely altered its traditionally low position in the academic hierarchy of French painting and prefigured the later essays of masters from Pablo Picasso to Andy Warhol. The exhibition closes with three important paintings by artists who keyed on Cézanne in their own engagement with still life: Vincent van Gogh, Maurice Denis, Georges Braque.