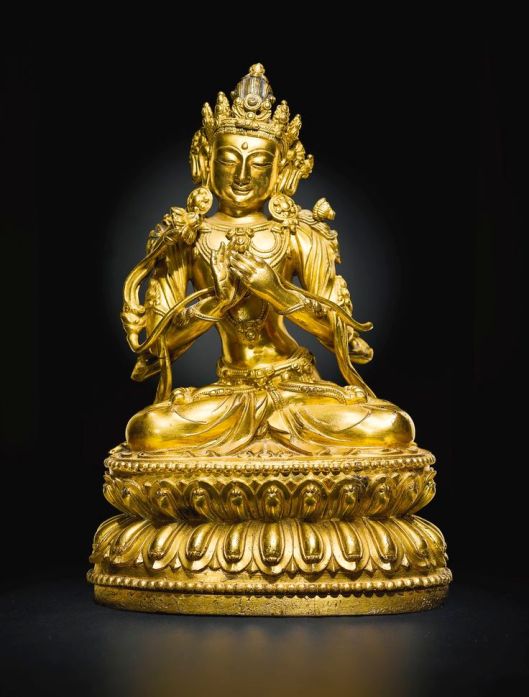 cast seated in dhyanasana on a double-lotus pedestal, the arms raised in dharamcakramudra to the chest, holding two stalks of uptala lotuses rising up the shoulders, the gracefully swaying figure wearing a dhoti falling into elegant pleats, draped with a celestial scarf around the shoulders and arms, the chest and the waist adorned by elaborate beaded necklaces, the face with a benevolent expression, surmounted by a five-leaf diadem around a high chignon, the lotus base incised with a reign mark reading Da Ming Yongle nian shi; 18cm., 7 1/8 in.

Notes: This figure of Manjushri, the ‘Beautiful and Virtuous Lord’, is representative of a group of Buddhist figures made in China during the reign of the Yongle emperor. It is particularly exquisite for the finely defined waist and gentle sway of the torso up to his broad chest. Stylistically it displays the influence of the art of Tibet, and was probably made as a gift from the Ming emperor who sought to maintain good relations with the Tibetan religious hierarchy. In the preceding Yuan dynasty, the authority of Mongol rulers had become closely associated with Tibetan Buddhist and Lamaist rituals. The tradition of Lamaist art continued into the Ming period and prevailed in works such as the present figure.

Manjushri is the Bodhisattva associated with the wisdom of Buddha and is commonly paired with Samantabhadra, the Bodhisattva of Compassion. The two Bodhisattvas are important acolytes of Shakyamuni and are believed to have been historical figures, possibly disciples of the Buddha. Manjushri resides in the Five Peak Mountain, Wutaishan, and is on earth to save people from ignorance. It is believed that Manjushri was instructed by Shakyamuni to transmit his teachings and his residence, Wutaishan, became one of the major centres of pilgrimage for his followers.

As seen from this figure, Manjushri wears a crown, robes and princely jewels and is portrayed holding his hands indharamcakramudra, or the ‘Wheel of Dhama’. This mudra symbolises one of the most important moments in the life of the Buddha, the occasion when he preached to his companions the first sermon after his Enlightenment in the Deer Park at Sarnath. The three extended fingers of the right hand represent the three vehicles of the Buddha’s teachings, namely the ‘hearers’ of the teachings through the middle finger; the ‘solitary realisers’ through the fourth finger; and the Mahayana, or ‘Great Vehicle’ through the little finger. The three extended fingers of the left hand symbolise the Three Jewels of Buddhism, the Buddha, the Dharma, and the Sangha.