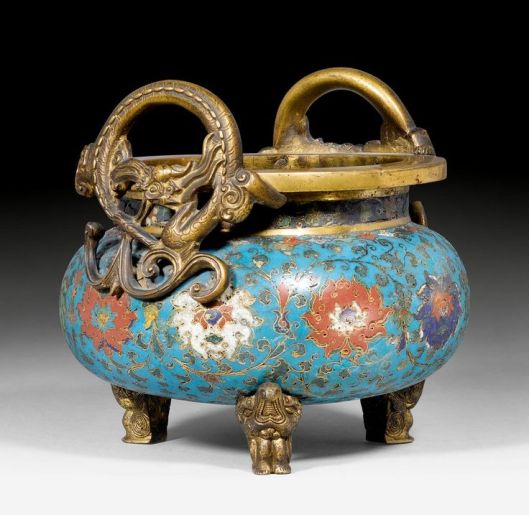 ZURICH.- On 29 and 30 October, Koller Zurich will be hosting special auctions dedicated to Asian art. The main focus of the well-diversified, ca. 800 lots on offer lies on Chinese art and on collectable art from Japan and India. The core of the auctions is formed by objects from Tibet, with an emphasis on Buddhist deities.

Tibet
For more than forty years, Koller Zurich has been paying special attention to Tibetan art. Their continuous supplying of high-quality objects has contributed to the establishment of numerous collections in Switzerland and Europe. Therefore, it is even more enjoyable when Koller regularly receives objects that were formerly part of established Swiss collections, and is able to bring these back to market. An example is the 31.5 cm, gilt copper figure of the Buddha Dipankara from the 15th century, which was acquired at Koller in 1978, and is now being offered for sale at CHF 30 0000 to 50 000 (lot 115). From another Swiss collection stems the Buddha Varadhara in fire-gilt copper from the 14th/15th century, which was acquired at Koller in 1990, and is now on offer for CHF 30 000 to 40 000 (lot 108), as well as the gilt bronze Buddha Shakyamuni from the 13th/14th century, which is estimated at the same value (lot 105). 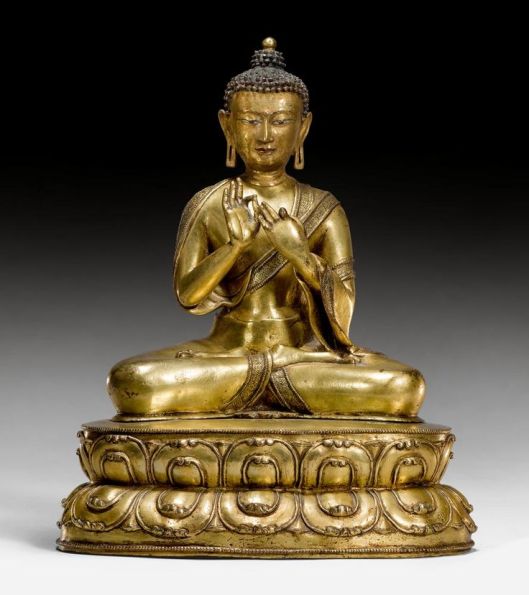 In addition, some of the finest specimens from a series of thankas stemming from an old collection of Tibetan art in Switzerland are being put up for auction; for example, the 73 x 49 cm thanka with the motif of three high-ranking Gelug-Lamas from the 18th century, which is available for CHF 8 000 to 12 000 (lot 154).

China and Mongolia
One of the highlights of the Chinese figures is the so-called Buddha of Happiness, depicted as a pot-bellied monk wearing a crown. This fire-gilt bronze figure is 28 cm tall and is being offered at CHF 20 000 to 30 000 (lot 177). Further highlights are the 66 cm bronze figure of the seated Guanyin from the early Ming dynasty, which is the most valuable piece and is estimated at CHF 60 000 to 90 000 (lot 173), and the Mongolian Buddha figure from the Zanabazar School, from the 18th century, which is estimated at CHF 50 000 to 80 000 (lot 119). 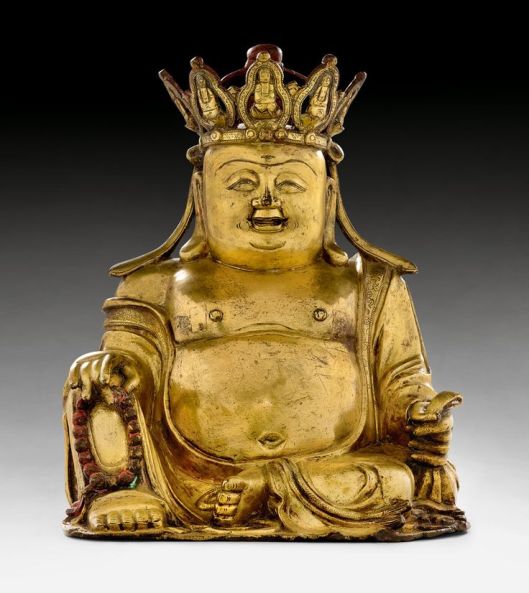 A fine gilt bronze figure of the Buddha of Happiness, China, 17th c. Height 28 cm, the crown is taken inside red. The happy Buddha of the future in the form of a pot-bellied monk with a crown on his head, in whose leaves are enthroned five Buddhas. The robe with engraved border is easily slipped over the right shoulder and let the entire magnificent belly free. In his right hand he holds a prayer chain, the left holds his bag with valuables. Estimate CHF 20 000-30 000 (€ 16 670-25 000). Photo Koller Auctions 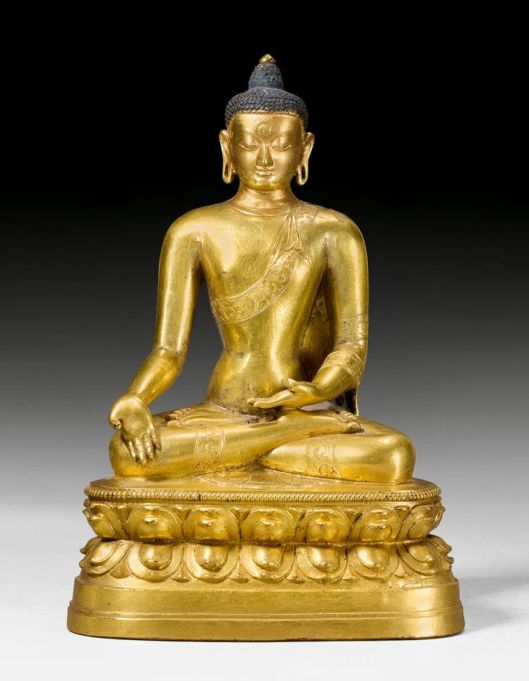 A fine gilt copper figure of the Uncrowned Ratnasambhava. Mongolia, Zanabazar School, 18th c. Height 21.5 cm. Sealed, his face was painted originally ritual. The uncrowned Ratnasambhava which can convert pride in balancing wisdom, sitting upright on a double lotus throne and has the rights rotated in the desired granting gesture outwards. The left hand rests in meditation gesture on the sole of the foot. The close-fitting robe is adorned with a finely engraved hem. Closed. Estimate CHF 50 000-80 000 (€ 41 670-66 670). Photo Koller Auctions

Another remarkable item is the carved rhinoceros horn libation cup, decorated with magnolias and peach branches, from the 17th century. This rare cup likewise originates from a Swiss private collection and is estimated to sell for CHF 40 000 to 60 000 (lot 323). 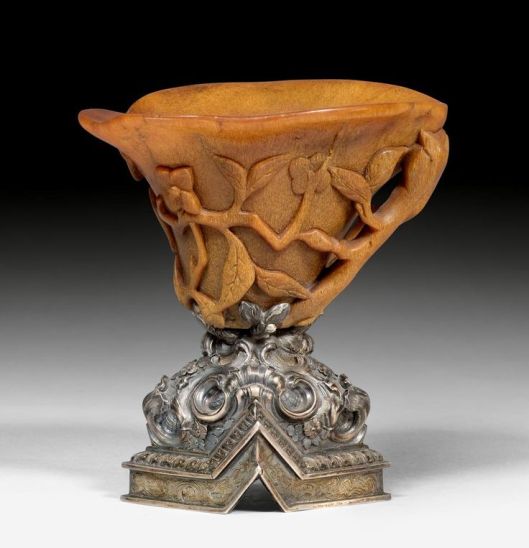 Koller Zurich also like to make special mention of the pieces of Chinese furniture on offer. The most valuable piece is a large writing desk of carved huali wood from the 18th century (lot 328), estimated at CHF 100 000 / 150 000. 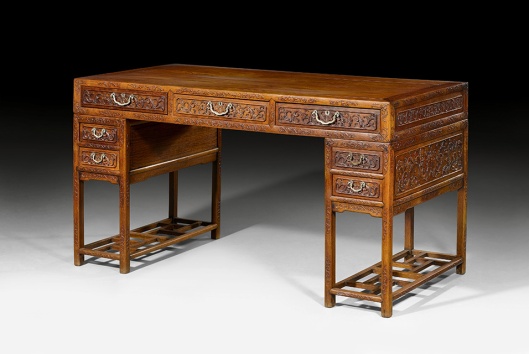 India and Japan
Among Indian art, several miniature paintings stemming from various collections are up for auction. One of the highlights is a work originating from Guler, ca. 1810/1820, depicting a prince and a lady conversing on a terrace, estimated at CHF 12 000 to 18 000 (lot 551). From Rajasthan, Gahadvala period, stems a 76 cm stele of Vishnu, exquisitely carved of black stone, and dating from the 12th century. This magnificent stele is on offer for CHF 30 000 to 50 000 (lot 527A).

Japanese art is represented in particular with a selection of folding screens (paravents). A six-fold screen depicting scenes from life in Kyoto, with its temples, shrines, entertainment districts and festivals, from the 17th/18th century, is estimated at CHF 40 000 to 60 000 (lot 483).

A fine six-fold ‘ Rakuchu rakugai‘ screen. Japan, 17th-18th c. 172×72 cm (one panel). Ink, color, gold and gold leaf on paper,, the gold clouds are slightly in relief. Vivid depiction of life in the old Kyôto with its temples and shrines, entertainment centers and festivals. In the middle of the Kamo River runs through the city, in the background of green hills. This motif is « rakuchu-rakugai to » called Scenes in and around the capital. Restored back. Estimate CHF 40 000-60 000 (€ 33 330-50 000). Photo Koller Auctions